A statue of a girl facing the Wall St. Bull, as part of a campaign by U.S. fund manager State Street in New York, March 7, 2017.
Brendan McDermid—Reuters
By Claire Zillman / Fortune

State Street Global Advisors installed the statue, sculpted by artist Kristen Visbal of Delaware, on the eve of International Women’s Day to serve as the visual component of the money manager’s new commitment to gender parity in corporate boardrooms. The firm, with roughly $2.5 trillion under management, announced Tuesday that it would pressure 3,500 companies worth $30 trillion in market cap to aim for gender parity on their boards.

So far the little girl—modeled after a seven-year-old whom Visbal knows and a 9-year-old Latina girl—is a sensation, generating headlines the world over and attracting onlookers to a brick-laid patch at the foot of Broadway.

The girl’s location is especially symbolic since she stands just a few paces from the snout of Wall Street’s fuming bull, the bronze statue positioned a block and a half from the New York Stock Exchange that’s come to represent capitalism’s often unchecked drive. By appearing on the bull’s plaza, the girl also has managed to enter what in New York City is considered hallowed ground.

The three-and-a-half ton Wall Street bull—first unveiled in 1989—is a magnet for tourists, who rub its horns or nose or genitals for good luck. It’s become a bona fide Manhattan landmark, and the city reveres it that way. A St. Patrick’s Day reveler once defaced the bull with green paint, and it was quickly cleaned with a solvent. The 9/11 terrorist attacks coated the monument in ash, but it was washed away the next day. Most famously, the bull was corralled for years after Occupy Wall Street protestors—denouncing the financial industry’s influence and greed—settled into nearby Zuccotti Park in 2011. The bull was fenced off with a police barricade on the first day of the demonstrations in September 2011 and officers on 24/7 patrol enforced a no-touch policy. For two and half years, it remained that way.

So how did the little bronze girl come to occupy such a rarified space? By the most mundane means: “We got a permit with the city,” says Anne McNally, vice president of pubic relations for State Street, who said the idea for the statue was cooked up jointly by the firm’s investment and marketing teams. The permit is for a week, but given the girl’s popularity, State Street is working to have it extended for a month.

Could the state of the girl last beyond that? McNally says the firm is “absolutely supportive of it being permanent as a work of art and a broader statement about gender diversity.” It’s up to the city’s Parks Department as to whether that happens, she says. The department did not immediately return Fortune‘s request for comment on the statue’s fate.

It’s worth pointing out that the Wall Street bull was itself an unexpected edition to the city’s landscape. In December 1989, artist Arturo Di Modica and a small band of co-conspirators lowered the bronze beast to Broad Street in front of the Stock Exchange in the middle of the night in a guerilla stunt. The bull reportedly ticked off NYSE Chairman Richard Grasso, who had it hauled off to Queens. But Di Modica convinced the city’s Parks Department to reinstate the statue, albeit a few blocks away in its current—now shared—spot on Broadway. 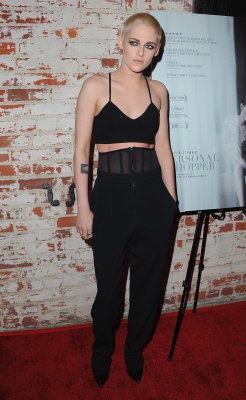 Kristen Stewart Just Got an Edgy Buzz Cut
Next Up: Editor's Pick