Today I Strike, Alone In My House

A statue of a defiant girl stands facing the Charging Bull sculpture in the Financial District of New York, on March 8, 2017.
Jeenah Moon—Bloomberg/Getty Images
Ideas
By Darlena Cunha

Typically, I wake up at 6:25 a.m. and quickly brush my teeth, give my husband a brief kiss and get my girls up for school. I help them dress and make them breakfast. I wash the dishes while they eat, and we’re out the door by 7:25 for the walk to school. When I get back, I grade papers while my husband gets ready for work, so I make us both breakfast and his lunch before throwing in another load of laundry. It’s not even 9 a.m.

Today, however, I strike. Put on by the Women’s March and International Women’s Strike, in conjunction with events by National Women’s Liberation, “A Day without Women” has women in the U.S. standing in solidarity with the world, while also protesting President Trump’s anti-woman agenda.

“If you ask a woman how much she does in a day, it’s overwhelming to listen to, but the part women don’t necessarily understand is that all this unpaid work has monetary value,” said Women’s March Organizer Holly Sprinkle.

As I strike today, there isn’t a solidarity wall of women walking off a jobsite with me, since I work from home. There won’t be a massive presence around the teachers in one of the poorer counties of Kentucky as they go to work, but afterward hold a sit-in. The waves of women photographed during the Women’s March will not be physically there as a minimum-wage McDonald’s worker serves her 17th coffee of the morning with no smile or pleasantries. She can’t afford to walk out; she’ll lose money for food and put her job in peril.

When people think of strikes, the grainy photos of eighth-grade textbooks of mills and factory workers come to mind here in the United States. Unions have been weakened to the point where even labor strikes are uncommon, let alone general strikes. Usually, a set of workers walks off a job site or out of a particular type of work to shut production down and draw attention to their part in the business plan. This forces the employer to take a look at their demands and treat them fairly. But women don’t just do one type of work, and we’re not all in one place. And our demands are as unique and individual as we all are.

For some, reproductive rights are the most important thing. Others will strike to close the pay gap. Still others will strike for penalties for sexual harassment and an end to misogyny. The demands women hold for our societal structure are many. Since these modern strikes are for political causes, and not against a particular employer, they are intrinsically different than the strikes we typically think of. Can such a diverse demographic come together to make a statement in this way?

“A strike stops production, it builds solidarity, it raises consciousness, so you’re going to learn about what your neighbors and others are going through,” said Hazel Levy, organizer for National Women’s Liberation and member of the Women of Color Caucus. “Some women are just not going to apologize to keep people comfortable. I’m not going to reassure men all the time. And when my kids come to me, I’ll tell them go to your dad.”

What about the women who cannot strike, from paid or unpaid labor? Many women feel like it would only hurt themselves if they didn’t show up to work—they’d be fired, or don’t have enough sick or paid-leave days to afford it. Many others (those working in healthcare, for instance) worry their absence would hurt others.

Yes, there might be a huge presence of strikers online, but that doesn’t provide protection in the real world, when you’re the only person who doesn’t show up to work. Even not smiling is a big deal. Certain women are secure enough to go through the day making a statement, but, for others, it would harm their standing on the jobsite and make their own day miserable. And some women cannot take the day off from unpaid labor like childcare or no one would care for their child.

One thing is for certain—as some women strike and others wear red and still others do nothing at all but look and listen to those privileged enough to take part in this day in some capacity—we cannot put pressure on any group of women or individual to strike the way we think they should. We must remember that “A Day Without Women” is a day for women, and make and protect space for the millions of women, mostly women of color, who are treated the worst in this country and who have the least number of protections.

“How do we empower women who don’t feel like they have the luxury to walk out of their job or say they can’t come in?” Sprinkle asked. “There is strength in numbers, and social media is important here. It’s good to see people online being that community. Being public when we do things like this will make it more normal to see women doing things like this.”

These groups and events do have an intersectional problem, where the issues and declarations of white women are inherently centered. It doesn’t mean the groups don’t mean well; it means they can do better.

“I go to these movements, and there are only six of us,” Levy said. “When we ask where are the women of color, the real question is: why are they not here? The answer is discrimination.”

Racism permeates the very structure of most organizations in the United States and activism is no different. If we are to move forward, we must follow the lead of women of color, elevating their voices over everyone else’s.

Striking isn’t about striking anymore. Striking is about making noise. And no matter how we decide to do it, women are shouting at the tops of their lungs. 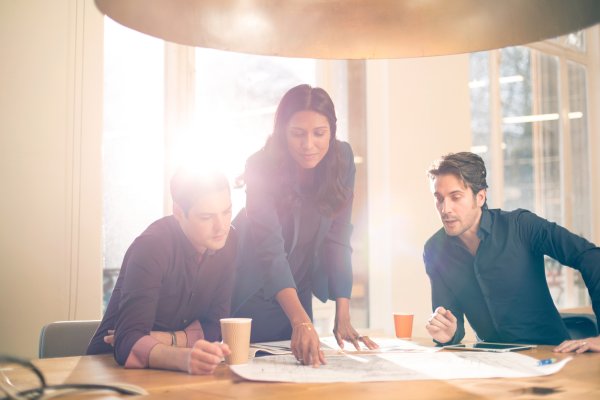 How To Close the Gender Pay Gap in 27 Years
Next Up: Editor's Pick