More than a century after the Supreme Court declared that Dred Scott and his fellow slaves were not U.S. citizens, descendants of Scott and the court’s chief justice at the time have come together to heal a rift of anger and guilt that spanned generations.

This week, the family of former Supreme Court Justice Roger Brooke Taney offered a public apology on the 160th anniversary of the landmark decision. Lynne Jackson, the great-great granddaughter of the man who tried suing for his freedom in a monumental court, is embracing the apology and praised Taney’s family for working to right the wrongs of the late judge.

“The fact that they were willing to put themselves out there, I’m very proud of them for stepping out in a public arena and making that declaration of honest truth — not whitewashing it, not making excuses, not denying it,” Jackson, 64, told TIME on Wednesday. “I knew it was a sincere apology so that made it very meaningful for me. It wasn’t like, ‘We should just say that and run.’”

In 1857, Taney ruled that black people, who were either slaves or who had ancestors who were slaves, were not American citizens and had no standing to sue in federal court. The decision indirectly became a catalyst for the Civil War before it was later overturned.

Charles Taney III, a great-great-great-nephew of the chief justice, on Monday stood in front of a crowd outside the Maryland State House — where a statue of his ancestor stands — and said he was sorry for the decision. “Apologizing to the Scotts for the Dred Scott decision is like bringing a Band-Aid to an amputation. It’s right and necessary to apologize, but what’s important now is what actions we can all take,” he said, according to the Baltimore Sun.

Jackson said she had wanted to meet the Taney family for a decade since she founded The Dred Scott Heritage Foundation, a nonprofit that aims to educate the public about the Supreme Court case. “I always wondered what it would be like,” the St. Louis resident told TIME.

Her curiosity was quelled last May when she received an email from Charles Taney III’s daughter inviting her to meet the Taneys in New York. The Taneys also invited her to view a play Taney’s daughter wrote that addresses the two family’s histories. That sparked the start of a connection.

“I was just floored,” Jackson said. “That was my first encounter with them and it was very genuine. They had a very open, honest approach and said, ‘You know what? That was our ancestor, and he was terribly wrong.’ They don’t deny the reality.”

Charles Taney III, a strategic planner, then spent the next few months helping Jackson’s foundation. Jackson said she hopes the two families can serve as a model, inspiring people to heal longtime differences and come together. “We have this climate around us of too much division,” she said. “They are willing to come side-by-side and walk forward in a positive way that we know will open doors to help create change.”

Jackson added that she received more than just a feeling of closure from the public apology. “Closure sounds like the end and you can walk away,” she said. “I think it’s an opening. I think it’s a new beginning.” 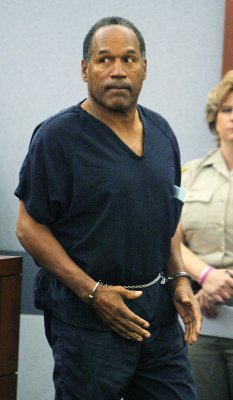 O.J. Simpson May be a Free Man as Early As This Fall
Next Up: Editor's Pick