By Ryan Kilpatrick and Tara John

On March 8, people around the world observed International Women’s Day — a day to commemorate the struggle for women’s rights and celebrate the political, social, economic and cultural achievements of women throughout history.

Over a century later, the celebration’s birthplace marked International Women’s Day in a suitably grand fashion, with women nationwide invited to participate in A Day Without a Woman — a strike to raise awareness around issues of civil liberties, reproductive rights and economic inequality.

Here’s how other countries have been celebrating so far:

In several cities childcare workers orchestrated a strike to protest pay inequality and the lack of funding for early education. More than 1,000 early-years workers walked off the job at 3:20 p.m. local time, when organizers said women in Australia begin working for free, and joined International Women’s Day rallies.

According to childcare union United Voice, the 97% female workforce is under-paid, and qualified early childhood educators earn about half the national average wage.

Ahead of International Women’s Day, Melbourne installed ten female pedestrian crossing icons on the city’s traffic signals, in an attempt to fight “unconscious bias” and “stereotypes” among citizens.

According to Chinese law, women are entitled to a half-day off on International Women’s Day. For many shops and online retailers, however, the day is simply an opportunity to attract female shoppers with discounts on cosmetics, lingerie and footwear.

Chinese feminist Li Maizi, who was detained for over a month two years ago after she and four other young activists tried to hand out stickers about sexual harassment on public transport in Chinese cities for International Women’s Day, addressed an audience in London, noting “that there has been both progress and a backlash against women’s rights” since her arrest and the increasing state surveillance of NGOs.

The harrowing experience of Li and the rest of the Feminist Five means that women’s marches are unlikely to be seen this year in China, which is home to around 675 million women. And in the lead-up to International Women’s Day, Sina Weibo — the country’s popular Twitter-like micro blogging site — suspended the account of feminist blog Women’s Voices, providing no explanation for the sudden shut-down.

Marchers gathered in the capital Tokyo to mark the day. Despite recent attempts by Prime Minister Shinzo Abe to raise the profile of women in the workforce, ingrained sexism keeps women chronically underemployed. The country also recently ranked 163rd out of 193 countries in female representation in lower houses of parliament.

The tiny Nordic country announced on Wednesday that it will become the first in the world to make companies prove they offer equal pay regardless of gender, sexuality, ethnicity and nationality.

Iceland plans to introduce The Equal Pay Standard, which will require employers with more than 25 staff to ensure they give equal pay for work that is of equal value. Through that, the country hopes to eradicate the gender pay gap by 2022.

“As a country we set ourselves the challenge to eradicate the gender pay gap by 2022 but, despite taking steps such as introducing dedicated paid leave for new dads and 40% quotas for women on boards of larger companies, we have not made the progress we would have wished,” Iceland’s Equality and Social Affairs Minister Thorsteinn Viglundsson said on Wednesday. “It is the right time to do something radical about this issue.”

A march for the One Billion Rising campaign, supported by 30 women’s groups in India, is set to place in capital New Delhi. Spurred into action by the gang rape and murder of a medical student Jyoti Singh in 2012, advocates have been making strides in India to beat back the culture of violence against women and help victims find justice.

In the Indonesian capital, women’s right groups have planned a march from central Jakarta to the presidential palace. On Saturday, another march saw hundreds of women dress in blood-stained clothes to decry sexual abuse and violence against women.

Women in Italy will enjoy free entry to all of the country’s museums and cultural sites, where exhibitions that “celebrate the feminine world” by highlighting art by and about women, will be showcased.

Women’s groups in Ireland are using International Women’s Day to call for a referendum to repeal the eighth amendment of the Constitution of Ireland, which recognizes “the right to life of the unborn,” effectively banning abortion. The Coalition to Repeal the Eighth Amendment called the legislation “a source of discrimination against all women living in Ireland” and has organized a strike and rally on March 8 under the hashtag #Strike4Repeal.

Women’s rights activists have planned a march from Beirut’s historic Sassine Square to Kaskas Garden on Saturday to protest women’s lack of political representation in the Lebanese parliament, a patrilineal citizenship law that means Lebanese mothers can’t pass citizenship onto their children if they marry a foreigner, domestic abuse — which effects nearly half of Lebanese women — and a penal code that fails to adequately punish rape.

Women protested outside the headquarters of the ruling Law and Justice (PiS) party to demand reproductive rights and demonstrate against gender discrimination. Additional demonstrations are to take place in more than 80 towns and cities in Poland. This follows huge protests in October against a blanket ban on abortion— which would have also blocked terminations for pregnancies that resulted from rape and incest. The government dropped the abortion ban as a result of the protests.

U.K. Parliament’s Women and Equalities Select Committee released a video encouraging women to get into politics.

Britain’s Department for International Development has made a video of a series of stories by women, supported by U.K. aid, who are now leading the change in their communities.

“We all know that women are part of the solution; that women’s participation in education, health, politics and peace building increases the chances of a more prosperous and stable future” International Development Secretary Priti Patel says in a statement. “Yet we must also remain alive to the many challenges that still come before girls and women to have an equal part in this story. So we stand with them all, in every way.” 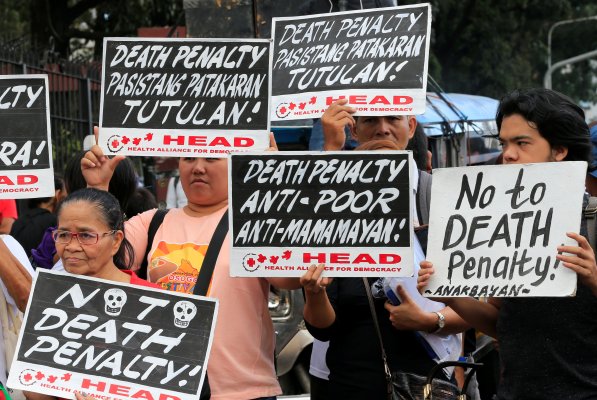 Philippine House Votes to Reimpose the Death Penalty
Next Up: Editor's Pick