For most of her life as a professional musician, Taylor Swift has stuck to a strict schedule: a full album release once every two years since 2006, dropped in the autumn. Like clockwork, her fans could depend on Swift to share her highly personal, radio-friendly tales of youth and heartbreak, even as her sound evolved from country to rock to pop (with a dubstep detour).

But in 2016, Swift stepped off the hamster wheel of her own production schedule. While there are no official guarantees from the Grammy winner yet, here’s everything we know about when we might next expect to hear a full new album from Swift.

Swift hasn’t stopped producing music. She’s been writing songs, contributing to Little Big Town’s “Better Man” (and, initially under a pseudonym, to ex Calvin Harris’s “This Is What You Came For”). Swift has never been one to stay idle, and it looks like she’s been expending her creative energies writing for fellow artists instead of solely focusing on her own work.

Her hit with Zayn for Fifty Shades Darker is tiding her over. “I Don’t Wanna Live Forever” climbed, predictably, to the very top of the charts in the winter of 2017—and managed to keep Swift (and her particular musical brand) relevant. With a hit like that, she satisfied fans’ appetites, albeit briefly.

Her only live performance of 2017 was in February. She played a pre-Super Bowl gig in Houston, Texas, where she announced to the lucky crowd that they were attending “100 percent” of her tour dates for the whole year. “As far as I know I’m only doing one show in 2017, and as far as I know, this is that show,” she told the audience. It was her second live performance since the 1989 World Tour ended in December 2015. Her statement suggests if she’s performing a live show again this year, she doesn’t know about it yet.

MORE The Power of Taylor Swift

Her good pal Ed Sheeran thinks she might release something around Christmas. Sheeran, who’s sitting pretty at the top of the charts with his own release Divide, alluded to the fact that savvy businessperson Swift might want to wait it out until the holidays for a big drop. “Taylor [Swift] isn’t going to be releasing until probably the end of this year—Christmas is the smartest time to release because that’s when everyone buys records,” he told the BBC in March 2017. Given his close relationship with Swift, Sheeran’s word is the closest fans have to actual inside information.

In the past, October was her album drop month of choice. Four out of five of her past studio albums came out in October. (Fearless dropped in November 2008.)

Swift has ripe material. The pop star, who often writes about her personal relationships, can draw from recent high-profile romances with Calvin Harris and Tom Hiddleston. The climax to her salvo with Kanye West regarding the lyrics to his song “Famous” or her ongoing tiff with Katy Perry could also provide fodder.

She’s been publicly supportive of other artists this year. Swift cut back substantially on her social media output in the latter half of 2016 and early 2017, but has tossed out love to her fellow artists and high-profile friends. It’s possible that Swift, who rarely engaged with featured artists on previous albums, might be ready to incorporate other voices into her future work. (Her song with Zayn could foreshadow more collaborations to come.) She’s given shout-outs to Lorde, Ed Sheeran, Little Big Town and Kings of Leon on social media, too.

She has a special relationship with the number 13. It’s her favorite number. It’s in her Twitter handle, it’s the date of her birthday and she even has been known to draw the number on her hand before going onstage to perform, as a kind of good-luck charm. Dedicated Swifties have used this piece of information to predict all kinds of potential album drop dates, suggesting she’ll try to coordinate a release with the lucky number. So on the 13th of each month, keep an eye out for any clues.

In the end, all we know for sure is that Swift will be back—on her own terms and in her own time. And probably with at least one chart-topping anthem in hand.

Correction: The original version of this article misstated the number of times Swift performed live after completing her 1989 World Tour in 2015. She’s performed twice since then, not once. 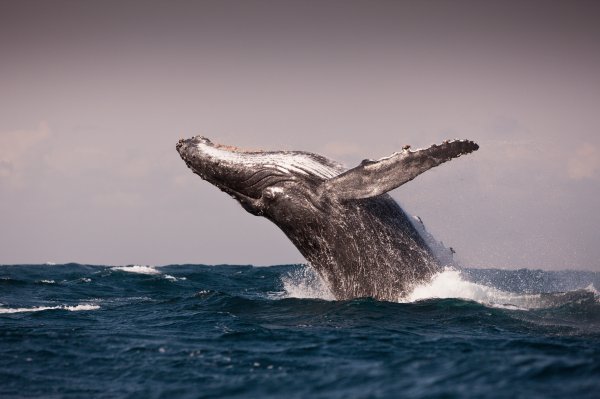 Humpback Whales Banding Together in Bizarre “Super-Groups”
Next Up: Editor's Pick