More than 150 of Neil Gorsuch‘s former classmates at Columbia University, both Democrats and Republicans, have written a letter supporting his nomination to the Supreme Court.

The letter, sent this week to Senate Judiciary Committee chairman Chuck Grassley (R-Ia) and ranking member Dianne Feinstein (D-Ca) and provided exclusively to TIME, recounts Gorsuch’s academic achievements and his genial presence on campus. “On campus, Neil was an upstanding person and a devoted friend; a man of unyielding integrity, faith in our institutions and unfailing politeness,” the letter says. “For his kindness and down-to-earth persona, we often joked that he was a modern-day Jimmy Stewart.”

Gorsuch graduated from Columbia in 1988, before heading off to Harvard Law School and then Oxford University for a philosophy degree. (“His academic credentials … are as good as I have ever seen,” President Trump said when he nominated him to the position.) The letter mentions Gorsuch founding The Federalist Paper at Columbia, which published conservative viewpoints on campus, and graduating Phi Beta Kappa. It says, “So special were his intellect, academic record and character that even then — some thirty years ago — there was a shared sense that he was poised for a meaningful and purposeful future.”

And the letter notes some qualities particularly germane to Gorsuch’s potential seat in the nation’s highest court. “The hallmark of Neil Gorsuch’s tenure at Columbia was his unflagging commitment to respectful and open dialogue on campus,” the letter states. “Despite an often contentious environment, Neil was a steadfast believer that we could disagree without being disagreeable. To be sure, he could deliver a devastating argument, laden with carefully researched facts and presented in a crisp and organized manner. Yet he was always a thoughtful and fair-minded listener who would not hesitate to re-evaluate his own beliefs when presented with persuasive arguments.”

The missive stresses the diversity of its 154 signatories, perhaps a strategic nod to Democrats who have demanded a “mainstream” Supreme Court pick. “Among us are CEOs and stay at home parents, finance executives and professors, lawyers and doctors, writers and artists, actors and musicians, entrepreneurs and engineers, scientists and salesmen, a public company president and a public school principal,” the letter says. “We are of different faiths and ethnic and socio-economic backgrounds. We are Democrats, Republicans and Independents.”

Gorsuch is set to begin his hearings before the Judiciary Committee on March 20. 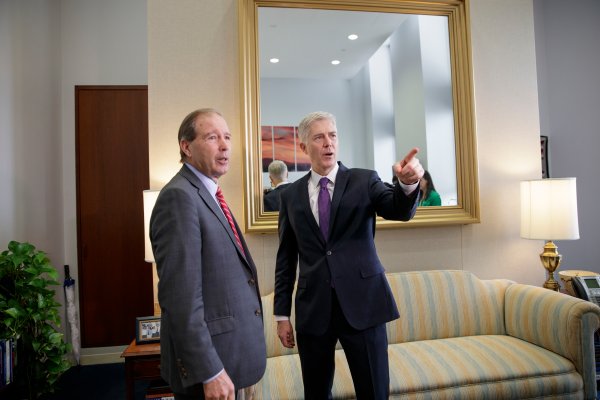 Here's How One Senator Plans to Get Merrick Garland on the Supreme Court
Next Up: Editor's Pick