Zayn Malik and Gigi Hadid are making the most of their time in the City of Love.

The British heartthrob and his supermodel girlfriend are in Paris for fashion week and were unable to attend Sunday night’s iHeartRadio Music Awards, where Malik won best music video for his hit single “Pillowtalk,” costarring Hadid.

Malik, 25, uploaded the short clip to his Twitter account, apologizing for not attending the award show and thanking his fans for the award.

“I’m currently in Paris. Sorry I can’t be there,’ he said. “A little birdie told me that I’ve actually won an award, so thank you very much. I’m very honored. To everyone that voted, it means a lot, and my costar’s actually sitting next to me right here, so she’s gonna say hello as well.”

As Malik speaks, a hand appears from out of the frame. Moments later, Hadid, 21, comes into view cozies up to her love.

“Hello guys. Thank so much,” the Vogue cover girl said before blowing a kiss to the camera.

Hadid and Malik began dating in November 2015 and briefly split over the summer after seven months of dating. The couple reunited shortly after and have been completely smitten since. 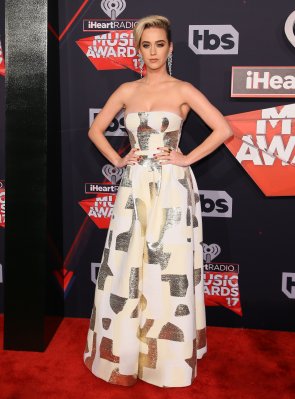 Katy Perry Wants Her New Hair to 'Redefine What It Means to Be Feminine'
Next Up: Editor's Pick