Their Friend Was Killed in Duterte's Brutal Drug War. So These Rappers Responded in Verse

The studio for the Filipino hip-hop group One Pro Exclusive is a low-budget affair. Located in Pasay City, southeast of Manila, it consists of a sound booth fashioned out of wood, with foam packed inside to help reduce ambient noise. The booth has a window that looks out onto a room no bigger than a closet, where producer John Harold Alcober, 22, sits at a computer, queuing up songs and apologizing for the stuffiness of the dark, cramped surroundings. Alcober, who goes by the name Couz John, built the setup in his home in 2014. A curtain separates the room from the kitchen. Down a hallway, his relatives watch TV. “I’m sorry, for my studio is not full of air con,” he jokes.

“Are you ready?” he asks Justine Juanillas, the 25-year-old rapper in the booth whose emcee name is Jay. “Let’s get it on.”

Jay, who has spiky hair and a raspy, Lil’ Wayne-style delivery, launches into a verse from “Hustisya,” which means “Justice” in Tagalog. “They can act blind / Your Eyes / But that cannot numb what I feel.” The song’s backdrop is the war on drugs in the Philippines, which has killed more than 7,000 people since President Rodrigo Duterte came to power in July. But the somber, angry composition focuses on the death of one victim, Michael Siaron, a pedicab driver and friend of the group who was shot dead on July 23, soon after the killings started. He was 30.

Read More: 12 Photographers in the Philippines Reveal the Drug War Images That Moved Them Most

The photo of the crime scene stunned the world with its gut-wrenching intimacy. Siaron’s widow, Jennilyn Olayres, cradled his lifeless body in her arms and wailed into the night. A placard labelled “drug pusher” had been left behind by the killers. But Siaron’s friends say he wasn’t into drugs. The image, which was compared to Michelangelo’s “La Pietà,” went viral. Supporters of Duterte said it was staged. To this day, however, it remains one of the most iconic photos of the drug war. After it was published and circulated, the world moved on and the killings continued. But the rappers in the neighborhood could not forget. They knew Siaron. He was their friend. They lived there and they had to do something.

“I saw Michael the night he was killed,” Jay tells TIME. “When he died, my instant reaction was to write the song.” The chorus in the music video version online replays powerful news footage of Olayres giving interviews and talking about the murder. In a country where speaking up against the drug war is not popular, and where wrongful death legal cases are virtually nonexistent, the song is remarkable. It also had a special guest: Siaron’s brother contributed the first verse.

The music is part of a wave of artistic responses to the violence. Much of it is taking place under the umbrella of a group called RESBAK, which stands for Respond and Break the Silence Against the Killings. In addition, a Medium-hosted blog called “The Kill List Chronicles” solicits “protest literature in the time of Duterte.” The list in the title refers to the collection of names authorities have used to arrest and target suspected drug users and dealers. One poem, published on Feb. 8 under the name Alma Anonas-Carpio, is called Dark Hours: “Sleep won’t touch me now / Three men were shot dead outside / In the restive night,” the first verse reads.

Siaron could sing, Jay says. “Seriously, Michael’s voice is like Adele’s voice … [He was] a very happy person. Joyful.” Before releasing “Justice” on YouTube, One Pro Exclusive put out “Yakap, or “Embrace,” which tells the story from the perspective of Michael’s widow, Olayres, waiting for her husband to come home from driving his pedicab. The lyrics are poignant. “Do you know/ The feeling of being left/ By someone you love/ Unexpectedly/ You said you will just take a ride/ For a while,” raps Carlo, another member. The chorus, sung by a 16-year-old named Marvin Haub, or “Vintrix,” recalls the pain of the moment she found his body. “It’s as if my world shattered when I saw you/ Lifeless, I embraced you /Apparently that was the last night that I was with you.”

Pasay City has been so deeply affected by the drug war that local media has dubbed it “Patay” or “Dead,” City. One of the victims was a five-year-old, shot dead alongside his father. Each night, residents fear more killings. “After 12 a.m., the drug war starts,” Jay says. Like many communities touched by the crackdown, Pasay is poor. As we walk to the studio through the local barangay, or township, we pass a social hall with an ongoing wake. Families who can’t afford funerals hold wakes in the local social hall, because it’s cheaper. Siaron’s was here. We pass small food stands and a basketball court. Pedicab drivers line the street. Siaron lived nearby, beside a creek filled with trash and waste. The house, a shack without running water or a toilet, has been torn down and the remaining family have since moved away. It was as if his history had been erased.

Raffy Lerma, the photographer for the Philippine Daily Inquirer who took the photo in July, has kept in touch with the family. One day a few months ago Olayres texted him about the group and their first song, “Embrace.” “It was actually her telling her story,” Lerma recalls. “I felt like I was brought back to that night … I also got emotional once I heard it,” he tells TIME. “I felt it again.” Lerma contacted RESBAK, and in February, some of the members of One Pro Exclusive performed the songs at an anti-drug war concert and art exhibition in a slum neighborhood of Quezon City. Painters showed pieces that recreated crime scenes. Poets read from the stage. The rappers performed in blindfolds to signify the way, they say, many in the Philippines have turned their eyes away from the violence.

Though the songs have been posted to YouTube and Facebook and viewed thousands of times, One Pro Exclusive is not a household name in the Filipino hip-hop scene. Vintrix is in school while Jay and Alcober have day jobs. Asked if they were fearful about continuing to speak out, Jay says no. “I’m not scared. I think it’s scary to die. But [for me] it’s not an issue … I want to be the voice of the masses.” 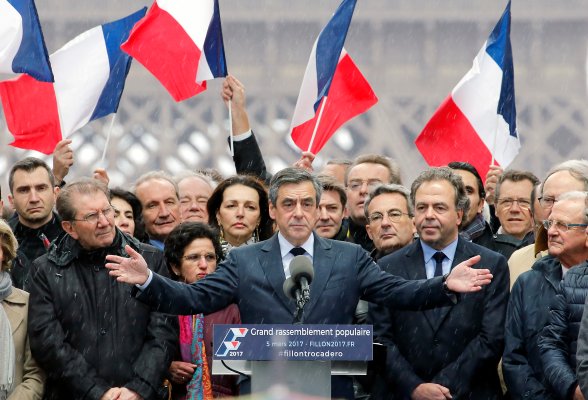 Scandal-Mired Fillon Vows to Fight on in French Elections
Next Up: Editor's Pick