Muslim Students Trying to Meet Oklahoma Lawmaker Are Asked: 'Do You Beat Your Wife?'

Oklahoma state Rep. John Bennett speaks on the floor of the Oklahoma House in Oklahoma City, on March 21, 2016.
Sue Ogrocki—AP
By Mahita Gajanan

Muslim students trying to meet with an Oklahoma lawmaker in the state capitol were given a questionnaire asking whether they beat their wives.

The three students visiting the office of Oklahoma Representative John Bennett were in Oklahoma City for an annual Muslim Day event organized by the Council on American-Islamic Relations (CAIR) to build connections between Muslims and state elected officials, Adam Soltani, executive director of the Oklahoma chapter of CAIR, told Reuters.

Soltani said that when the students tried to meet with Bennett, they received a two-page form from one of Bennett’s staff members and were told to fill it out. The question “Do you beat your wife?” appeared on the form, as did inquiries about whether Muslims should rule over non-Muslims and whether they believed an adherent to Islam should be punished for leaving the religion.

The students who visited the office — two are in high school and one is in law school — were told Bennett was away and did not get to speak to him, according to Soltani and a CAIR official who spoke to the Washington Post.

“What’s most inflammatory is the questions itself, the fact that Muslims have to pass a religious test in order to see a representative of our state, surely he does not do this to Christian constituents or Jewish constituents,” Soltani said.

Bennett — who has been criticized for speaking against Islam before — confirmed to the Tulsa World that the students were given the form asking, “Do you beat your wife?” He said that according to the Quran and Islamic law, Muslims are permitted to beat their wives.

“This certainly does not mean that all Muslim men beat their wives, only that Islam permits them to do so,” he said. 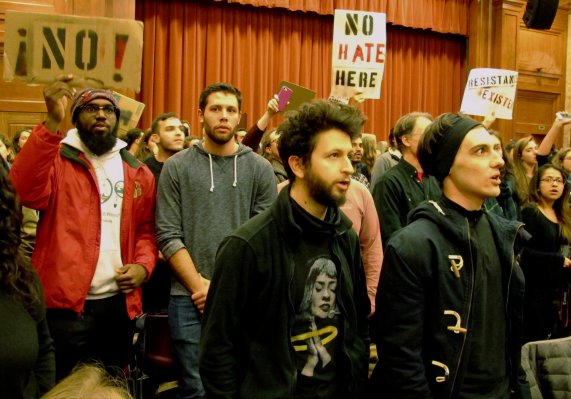 Conservative Speaks Out After Students Shut Down Talk
Next Up: Editor's Pick