Donald Trump and the New Dawn of Tyranny

President Trump walks to the Oval Office at the White House, on Feb. 24, 2017.
Mark Wilson—Getty Images
Ideas
By Timothy Snyder
Timothy Snyder is Yale University's Housum Professor of History and the author of On Tyranny

The Founding Fathers designed the constitution to prevent some Americans from exercising tyranny. Alert to the classical examples they knew, the decline of ancient Greece and Rome into oligarchy and empire, they established the rule of law, checks and balances, and regular elections as the means of preserving the new republic. Thus far, it has worked. But it need not work forever.

We might imagine that the American system must somehow always sustain itself. But a broader look at the history of democratic republics established since our own revolution reveals that most of them have failed. Politicians who emerge from democratic practices can then work to undo democratic institutions. This was true in the rise of fascism in the 1920s and 1930s, as well as during the spread of communism in the 1940s, and indeed in the new wave of authoritarian regime changes of the 21st century. Indeed, absent a truly decisive revolution, which is a rare event, a regime change depends upon such people — regime changers — emerging in one system and transforming it into another.

It is in this light that we should consider President Donald Trump and his closest advisors and spokespeople. Although they occupy the positions they do thanks to an election, there is little reason to believe that they support the American constitutional system as it stands, and much to remind us of authoritarian regimes changes of the recent past. A basic weapon of regime changers, as fascists realized nearly a century ago, is to destroy the concept of truth. Democracy requires the rule of law, the rule of law depends upon trust, and trust depends upon citizens’ acceptance of factuality. The president and his aides actively seek to destroy Americans’ sense of reality. Not only does the White House spread “alternative facts,” but Kellyanne Conway openly proclaims this as right and good. Post-factuality is pre-fascism.

The function of the press, as the Founding Fathers understood, was to generate the common knowledge on which citizens could understand and debate policy, and to prevent rulers from behaving tyrannically. Whether from the far right or the far left, the regime changers of the twentieth century understood that the media had to be bullied and deprived of importance. When Steve Bannon refers to the press as the “opposition,” or Mr. Trump calls journalists “enemies,” they are expressing their support for the demolition of the historical, ethical, and intellectual bases of the political life we take for granted. Indeed, when Mr. Trump calls journalists “enemies of the people,” he is quoting Joseph Stalin.

Since the end of the cold war, the new authoritarian regimes that have emerged in eastern Europe have taken the form of authoritarian kleptocracies: Russia is the most enduring example of this model; a revolution halted the development of a similar regime in Ukraine in 2014. The Founders, opponents of a British monarchy, were alert to the danger that government might serve to enrich a single family. The emoluments clause of the constitution confirms our common sense: no one can be trusted to defend the interests of citizens if his policy choices can make him richer. This president has not revealed the basic financial information about himself, but we know that he has business interests at home and abroad. Russians and Ukrainians have been quick to notice a familiar pattern.

If there is a common thread that links American political rhetoric from the 18th century to today, through the confrontations with fascist and communist rivals and into the 21st century it is the word “democracy.” Our practice has been imperfect, but the endorsement of the idea of rule by the people has been consistent, until now. This president has defied that norm. He has said almost nothing in favor of democracy or, for that matter, civil and human rights. He admires authoritarians. His one major comment on democracy was that he would contest the outcome of elections if they were not in his favor. That is opposition to democracy. Indeed, not recognizing election results and moving to take power anyway is what authoritarians do.

In recent authoritarian regime changes, in Poland and Hungary as well as Russia, the executive power has been able to sideline the judiciary and then humble the legislature. The idea of checks and balances is enshrined in our constitution, but of course also in theirs, is that none of the three branches of government can dominate the others. In denigrating judges, Mr. Trump attacks the geometry of the system. Once the courts are tamed, the legislature cannot defend itself, and we have authoritarianism. If legislators do not support the judiciary, then their turn for humiliation will come, and the laws they pass will be unenforceable. This has been the pattern in recent authoritarian regime changes around the world.

Right-wing authoritarians today use the threat or the reality of terrorism to seek and hold power. The one consistent policy of the Trump administration thus far has been to encourage a Muslim terrorist attack within or upon the United States. Everywhere the first executive order on refugees and immigrants was understood as directed against Muslims. The major consequence, most likely the intended one, is the alienation of Muslims at home and abroad. The proposal to move the US embassy in Israel to Jerusalem is similar: it will never take place, so serves only to alienate and enrage Muslims. Michael Flynn is in the same category: though he was only national security advisor for three weeks, few Muslims will forget that he referred to their religion as a “cancer.” Modern authoritarianism is terror management, and so modern authoritarians need terror attacks: real, simulated, or both. As James Madison noticed long ago, tyranny arises “on some favorable emergency.”

The experience of the 21st century, as well as the experience of the 1930s, teaches that it takes about a year to engineer a regime change. To what, exactly? We cannot deduce, from the Trump administration’s destructive chaos and ideological incoherence, what the post-democratic American regime would be. We can be sure, however, that we would miss being free. The prospect of children and grandchildren growing up under tyranny is terrifyingly real. History can remind us of the fragile fundaments of our own democracy. But what follows now is up to us.

Timothy Snyder is a professor of history at Yale University and the author, most recently, of On Tyranny: Twenty Lessons from the Twentieth Century. 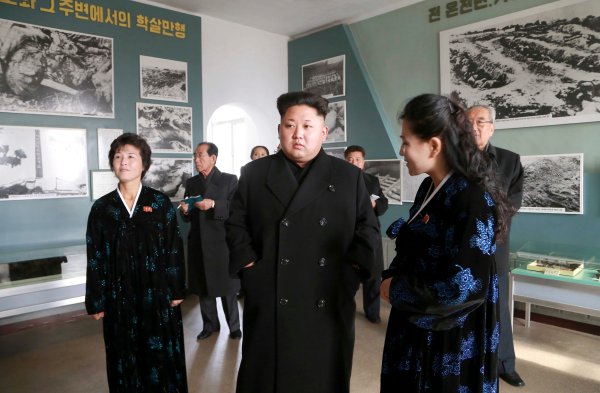 New Kim on the Block: The Rise of Kim Jong Un's Little Sister
Next Up: Editor's Pick