TIME: This is a book about how to raise a feminist. Now that you’re a mother of a girl yourself, what has surprised you?

Adichie: How different and encompassing my love for her is, how I’ve never loved like this, and how fiercely protective I am — sometimes I think unreasonably so. It’s also made me see clearly how life is messy, how ideology doesn’t neatly match real life. There’s a certain amount of flexibility that’s important to have. Here’s an example: I don’t particularly like the idea of girls wearing pink, and I don’t find pink very attractive. When my child is old enough to negotiate with me, if she wants everything in pink, I will let her have it — but I’ll have conversations with her about why the pink/blue binary is a problem.

What has been your biggest pet peeve about parenting advice?

Probably my family and Nigerian friends making comments about my daughter’s hair. ‘Oh, it’s tangled,’ ‘Oh, she’s getting dreadlocks.’ My daughter has a head full of very beautiful curly hair, and she hates to have her hair touched — she cries. She’s so young, I just don’t think it’s worth it to have her go through the pain of combing her hair. I wash her hair and I use a natural conditioner, I put some natural oils in it and I let it be. She’s going to be old enough at some point to decide what she wants to do.

Why did you decide to keep you pregnancy quiet?

I wanted it to be something I shared with people who actually knew me, people who I love and people who love me. In the past 10, 15 years, I think maybe with the rise of social media, there’s a kind of performance of pregnancy that women are expected to engage in. Particularly if you’re in the public eye. And I want to say that women who make the choice to do that, that’s fine. But I find it problematic because it trivializes the complexity of pregnancy.

Why do you think it’s good for a mother to have a job, even if it isn’t a job she loves?

Because one of my favorite sayings in Igbo translates very loosely to ‘A woman must have her own.’ And that’s why. I think of course the ideal is you love your job, but the reality is that many people don’t. But I also don’t think that that’s a reason not to have a job, particularly if you’re a woman. I think to be female is often to be encouraged to measure your worth based on how much of yourself you’re able to sacrifice. A woman having a job is kind a pushback to that idea. It’s the idea of a woman being her full, separate self.

You write that you are angrier about sexism than racism. Why?

It’s not a suggestion somehow that sexism is worse than racism, because I don’t think so. But I have often felt lonely in my anger about sexism. I felt lonely because the people I love, the people I spend time with, are mostly — and these are people who are not just black, so people from different parts of the world, different races — people who get anti-black racism. People who just never ask me to prove that anti-black racism exists. But when it comes to sexism, I find that kind, intelligent, loving people often want me to prove that gender injustice exists.

You had a showdown with a Donald Trump supporter on BBC Newsnight over race in the election. How should people engage with those who don’t share their views?

I’m interested in people who don’t share my political opinions, because I want to understand their thinking, and also obviously because I want to change their opinions, I want to convince. So even before Donald Trump I subscribed to right-wing publications. And I don’t consider myself right-wing, I consider myself left-leaning. I also don’t really consider myself ultra-left. It’s hard to be raised in an Igbo household and be extremely left in the Western sense. But anyway, if I had been told that I would be having a conversation with a Trump supporter, I would not have come. But, if I had been told that a conservative Republican was coming on to debate, I probably would have gone, because I’m quite willing to debate competing ideas about how the government should function — should we have a welfare state? Should education be for profit? But I’m just unwilling to debate the humanity of groups of people. And that for me is what Donald Trump represents.

You write, “In teaching [girls] about oppression, be careful not to turn the oppressed into saints.” What do you mean by that?

I think sometimes in discourse around people who have been oppressed, there’s a need to put this halo around their heads and make them seem perfect, because then they’re more deserving of our sympathy or empathy. I think it happens a lot with black people in this country. So if a black person has experienced racism, God save that black person if that black person has also done something not-so-great in their past, because somehow it then becomes a reason why they deserve the racist act. Perfection shouldn’t be a condition for justice, or even for empathy and sympathy.

How did it feel to have your book We Should All Be Feminists given to every 16-year-old in Sweden?

I felt bad for the poor kids! No, I was pleasantly surprised. I got a report recently with feedback after the kids had read it, and I was really pleased at some of the letters — boys who said, ‘Now I know that a feminist isn’t somebody who hates men, and now I’m going to call myself a feminist and I’m going to try to change my society.’

Is it overall a good thing or a bad thing for feminism to have pop culture prominence?

I think it’s a good thing. I want a world in which we no longer need feminism, because men and women will be equal. And if we’re going to get that world, we need to have as many people as possible on board.

What turns do you think literature will take in the next four years?

What I would like to see is more politically present writing, if that makes sense. I remember thinking, for example, that the U.S. was at war in Iraq and Afghanistan for quite a while, and it just felt to me odd that a lot of the literature didn’t reflect that. There’s a sense in which literature in the U.S. has always sort of prided itself on being quite apart form political realities.

You famously grew up in a house where Chinua Achebe once lived. What are the odds that some future great novelist is growing up there now?

Who knows? I know there’s a family there, although I was heartbroken that they cut down the beautiful frangipani trees. Chinua Achebe’s spirit is, I’m sure, still hovering around.

A version of this article appeared in the Mar. 13, 2017 issue of TIME Magazine. 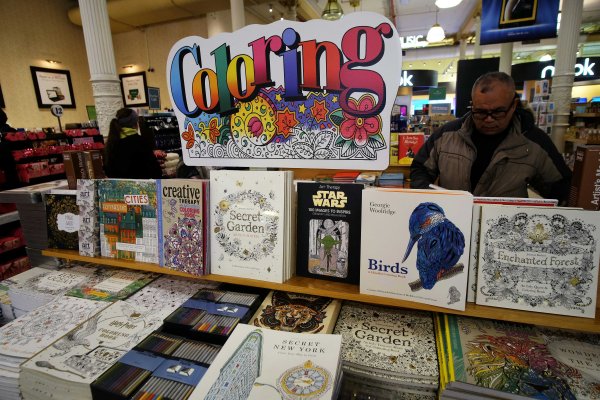 Is the Adult Coloring Book Trend Coming to an End?
Next Up: Editor's Pick