A couple of weeks before Christmas, National Geographic‘s Ryan Duffy joined Filipino crime beat reporters on Manila’s graveyard shift. On a tip, the American rides in a convoy of press cars to the scene of a vigilante killing.

So begins a new feature on the Philippines’ drug war, which airs Monday. It shows the aftermath of the first of five deadly shootings reported that night; one of over 7,000 since Rodrigo Duterte began his so-called war on drugs on July 1.

Replete with footage of bagged bodies in rain-slicked slums and relatives weeping at wakes — and overlaid with the Philippine President’s brutal statements on killing millions of addicts — Nat Geo captures in motion a world rendered by James Nachtwey in his series In Manila Death Comes by Night, and by local photographers on the frontlines of the war. Duffy’s reporting — from crime scene, to wake, to drug rehab center — roughly follows the trajectory of Rishi Iyengar’s The Killing Time.

But there’s also footage of a little-shown aspect of the drug war: Operation Tokhang — a portmanteau of the Visayan words for “knock” and “plead.” A clip shows police sweeping through a neighborhood and apparently arbitrarily detaining residents. The film suggest that the list of “surrendered” people compiled under such operations — which now counts more than 1 million members — might just be a hit list.

In a December survey conducted by Social Weather Station, 78% of Filipinos said they feared they or someone they knew would become a victim of extrajudicial killings — yet 85% reported being satisfied with the ongoing operations to curb drugs. It’s a contradiction captured neatly here. “Drug addicts are not humans,” one interviewee said in support of the killings. His is a popular refrain. It comes straight from the President himself: “Crime against humanity?” Duterte has memorably mused, “In the first place, I’d like to be frank with you: are they humans?” 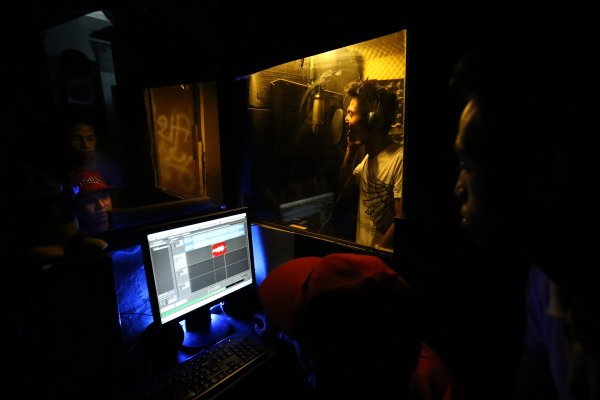 Philippine Rappers Respond to Duterte's Killings in Verse
Next Up: Editor's Pick