Under fire for previously undisclosed contact with the Russian ambassador, Attorney General Jeff Sessions announced Thursday that he would recuse himself from any investigations related to President Trump’s campaign.

Speaking at a press conference at the Department of Justice, Sessions said his staff recommended he recuse himself because of his involvement with the Trump campaign and “I believe those recommendations are right and just.”

“I have now decided to recuse myself from any existing or future investigations of any matter relating in any way to the campaigns for President of the United States,” he said. “I should not be involved in investigating a campaign I had a role in.”

He also sought to clear up his testimony during his confirmation hearing that seemed to conflict with the fact that he had met with the Russian ambassador twice in 2016. (During his hearing, he said he “did not have communications with the Russians.”)

“Let me be clear,” Sessions said Thursday. “I never had meetings with Russian operatives or Russian intermediaries about the Trump campaign. And the idea that I was part of a quote, ‘continuing exchange of information during the campaign between Trump surrogates and intermediaries for the Russian government’ is totally false. That is the question that Senator Franken asked me at the hearing.”

He said he would write the Senate Judiciary committee “today or tomorrow” to clarify his testimony for the record.

Sessions’ announcement came amid growing calls from lawmakers on both sides of the aisle for him to recuse himself from any investigation into Russian involvement in the U.S. election.

The controversy started Wednesday evening, when the Washington Post published a report that Sessions had met twice with Russian ambassador Sergey Kislyak in 2016, which he had not mentioned during his hearings. The White House is standing by Sessions.

Sessions’ recusal is the latest in a months-long string of questions and controversies over the Trump’s inner circle’s connections to Russia.

In August, Trump’s campaign chairman Paul Manafort resigned over questions about his links to Ukraine’s former pro-Russia regime. Then just last month, Trump’s National Security Adviser Michael Flynn was forced to resign after it came to light that he had misled Vice President Mike Pence about his contact with Russia during the transition.

“He was clearly asked about his role as a campaign surrogate,” Spicer said, explaining Session’s answer in congressional testimony. “He was literally conducting himself as a U.S. Senator. He didn’t do anything that wasn’t part of his job.” 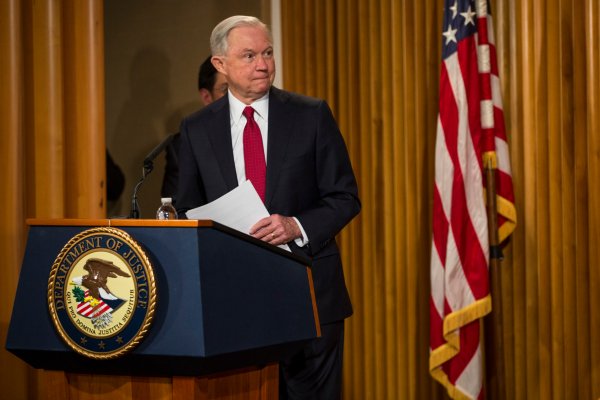