The 5 Key Players in the Battle for Mosul

Iraqi forces hold a position as troops advance through Mosul's Jawasaq neighbourhood on February 27, 2017, during an offensive to retake the area from Islamic State group fighters.
Ahmad al-Rubaye—AFP/Getty Images
By Ian Bremmer

The battle for Mosul—Iraq’s second largest city—barrels westward toward its end. When ISIS loses Mosul, it will also lose its last significant foothold in Iraq.

The east of the city was liberated in January, but the fight for the remaining half of the city will be intense, bloody, and contested by a host of different actors that are difficult to keep track of. These 5 facts explain what you need to know.

Let’s begin with those caught in the crossfire. Mosul’s population, among the most diverse in Iraq, includes substantial populations of Sunni Arabs, Assyrian Christians, Kurds, Yazidis, Turkmen, and other minorities. It wasn’t long ago that Mosul was the main industrial city in northern Iraq and played a crucial role in the country’s trade with Turkey and Syria. Mosul fell to ISIS in early June 2014; and when the offensive to retake Mosul began in October 2016, there were about 1.5 million people living in the city.

More than 170,000 have since fled the violence, but up to 800,000 are still living in the densely-populated Western districts where the bulk of the fighting is still to take place. The U.N. has warned that the fight to retake the western part of the city could displace up to 400,000 civilians, twice the number of people that were displaced from eastern Mosul. No one can predict how many will be killed.

Each ISIS stronghold tells its own story, and Mosul is no exception. Mosul has been considered ISIS’s “cultural capital” from the start, as it was here that ISIS leader Abu Bakr al-Baghdadi announced the establishment of the caliphate in the summer of 2014. Estimates of the number of ISIS fighters in the city range widely; the most recent peg them at 4,000 to 6,000. But as ISIS loses more and more territory, its fighters are becoming more desperate and dangerous. They’ve set off more than 250 car bombs in Mosul alone as they try to fight off advancing Iraqi security forces, and sent in “suicide squads” whom witnesses identify by their distinct uniforms and suicide belts. At one point, ISIS controlled 40 percent of Iraq; now it controls less than 10 percent.

The fall of Mosul will effectively end ISIS’s presence in Iraq, a realization that boosts the confidence and determination of the Iraqi security forces bearing down on them. And Mosul’s fall will leave the Syrian city of Raqqa as the last major city that ISIS controls.

There are about 100,000 coalition forces involved in the battle to recapture Mosul, led by the Iraqi army. At the outset of the offensive the Iraqis were the only ones entering the ground operation in the city. For Prime Minister Haider al-Abadi, it was crucial (and politically necessary) to show that it was primarily Iraqi forces that drove ISIS from the country. To that end, Abadi has deployed 14 battalions of Iraq’s elite counterterrorism service to the city. The campaign to recapture Mosul began in October 2016; in the last three months, 500 Iraqi troops have been killed and another 3,000 wounded.

But recapturing Mosul goes beyond just driving ISIS from the country. Abadi’s government is under political duress as its political opposition accuses it of corruption and an inability to keep Iraqis safe (6,878 civilians were killed and 12,388 were wounded in “acts of terrorism, violence and armed conflict” just in 2016 according to the U.N.). Recapturing Mosul would silence those critics to some degree, and would help shore up some much-needed political stability. It might also reverse some of the criticism of the Iraqi military that followed the decisive ISIS victory of 2014 and the images of Iraqi troops shedding their uniforms and running for their lives.

As of January 2017, there are more than 5,500 U.S. troops stationed in Iraq and Syria—of those, 5,000 are based in Iraq. Officially, U.S. troops on the ground are involved in the battle for Mosul in a strictly training and advisory capacity, but the U.S. is providing plenty of air support in the form of Apache attack helicopters, warplanes and drones. That air support is needed as the increasingly desperate Islamic State has taken to using makeshift drones and equipping them with bombs. American forces have been shooting them out of the sky while ground troops continue their advance.

While the U.S. remains wary of committing a significant amount of boots on the ground, it has absolutely no problem fighting ISIS from the air—of the 18,666 strikes carried out by coalition forces in Iraq and Syria as of February 28 (11,245 of which took place in Iraq), 14,704 of them have been American. This is a significant commitment; the U.S. has $11 billion earmarked for its fight against ISIS for the 2017 fiscal year—that’s more than the total defense budgets of all but 19 countries (comparing 2015 figures).

One of the benefits of leading the fight from the air? You get to avoid the scrum on the ground. In addition to Iraqi and U.S. forces, the anti-ISIS coalition is joined by Turkish forces, Kurdish forces, Shia militias and Sunni militias (among others), whose sole common motivator is hatred of ISIS. Beyond that, everyone is looking out for their own interests—Sunni and Shiite militias are looking to improve their reputations and their sectarian political parties’ standings across Iraq ahead of upcoming elections. Kurds want to expand their sphere of influence in northern Iraq—some Kurdish leaders even believe Mosul falls within boundaries of an independent Kurdistan, and want control of the city. That’s a non-starter for Iraqis, as well as for Turks, who have a strained and violent relationship with the Kurdish minority within their own borders. Turkey joined the fight against ISIS as the terrorist group targeted civilians in their country (most notably in bloody airport bombings this past summer), as well as to keep the advancing Kurdish forces in check.

For the time being, all of these groups are working in concert. But there is real concern about what happens to Mosul once ISIS falls, and whether that will be the end of the violence or just the beginning of a new chapter. None of these groups, Iraqis or outsiders, has an answer for that. 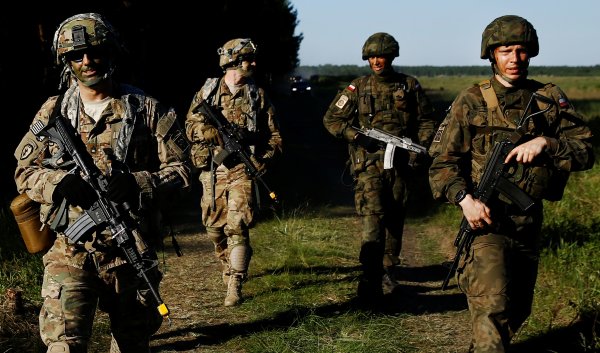 The Only 5 Countries That Meet NATO's Defense Spending Requirements
Next Up: Editor's Pick