The Mysterious Death and Life of Kim Jong Nam

The two young Asian women dissolved seamlessly into this jumble. Nobody paid much attention when they approached a portly male traveler in a pale blue suit, backpack slung over his right shoulder. As he lingered by the check-in kiosks, one woman grabbed the man from behind and the other pressed a small cloth to his face. They tussled for a few seconds, then the women relaxed their grip and melted away–not running, but not dawdling.

The man blinked in incomprehension, then rushed to the terminal help desk, trying to explain to the orange-jacketed staff what had just taken place. Soon he complained of feeling groggy and having difficulty seeing and was helped to a nearby first-aid station. He was strapped onto a stretcher and sent to a hospital in an ambulance–but died en route. Both women had long since fled, taking a taxi from outside the terminal to a midrange hotel southwest of the city center.

Only the next day, Feb. 14, did it emerge that what had been captured on airport cameras was a very public assassination. The dead man had been booked on a 10 a.m. flight to the semiautonomous Chinese territory of Macau under the name Kim Chol, 46. But his passport was a fake. His true identity was Kim Jong Nam, 45, eldest son of former North Korean dictator Kim Jong Il and half brother to current Supreme Leader Kim Jong Un.

South Korean officials were quick to blame Kim’s murder on the secretive North Korean regime, which has ruled the impoverished nation of 25 million through Stalinist-style oppression since 1948. By Feb. 16, Malaysian authorities had the two women in custody. One is Siti Aisyah, 25, from Serang, Indonesia. The other is Vietnamese national Doan Thi Huong, 28.

Both say they thought they were part of a prank for a TV show; Aisyah told police she was paid $90 by two men “who looked Japanese or Korean.” The social-media accounts of the two women show the itinerant lifestyle and food-obsessed selfies typical of Southeast Asian women working casual hospitality jobs. Malaysian police chief Khalid Abu Bakar has challenged their story, highlighting that Huong immediately rushed to the bathroom after the attack. “She was very aware that [the cloth] was toxic and that she needed to wash her hands,” he told reporters. On Feb. 28, Malaysian authorities charged the two women with murder.

Local authorities also arrested a Malaysian and a North Korean–the latter a scientist who had been living in Kuala Lumpur for at least a year. Police named four other North Korean suspects who fled the country immediately after the attack and one more who may still be hiding in Malaysia. Investigators also want to speak to a North Korean diplomat and a staff member at its state-owned airline, Air Koryo, but the North Korean embassy in Kuala Lumpur has refused to cooperate. In total, eight North Koreans have been named in connection with the murder. “It suggests a regime that is bloodthirsty and ruthless,” says Ken Gause, a North Korea specialist at the Center for Naval Analyses in Arlington, Va.

It got worse. On Feb. 24, Malaysian investigators revealed that the deadly toxin in the handkerchief was VX, a military-grade chemical weapon that makes muscles clench uncontrollably and causes death through excruciating asphyxiation in just 15 to 20 minutes. The use of such a rare and specialized compound, along with an attempted break-in at the mortuary that held Kim’s body, debunked alternative theories of a mob hit or a business deal gone sour. North Korea had likely unleashed a U.N.-certified weapon of mass destruction inside a crowded international airport. “This is a very, very big deal,” says professor Jennifer Lind, an East Asia expert at Dartmouth College.

The assassination kept North Korea squarely on the world stage and in the familiar role of villain. The day before the murder, Pyongyang test-fired another ballistic missile, and Western experts believe it is only a matter of time before it tests the reflexes of the new U.S. President, Donald Trump. And every belligerent act ratchets up tensions between Washington and Beijing, which has historically been responsible for keeping the Kim dynasty from acting on its worst instincts.

Certainly, the short, strange and lonely life of Kim Jong Nam is a testament to all the shortcomings of the family in power in Pyongyang. He was born in 1971 to an actress named Song Hye Rim, who was Dear Leader Kim Jong Il’s favorite mistress. However, his grandfather, Great Leader Kim Il Sung, the country’s founder, disapproved of his son’s relationship, and so his first grandson was raised in secret until after his fifth birthday. By age 8, he was living with his grandmother in Moscow, attending international schools in Russia and Switzerland, where he learned to speak several languages well.

As the eldest son of Kim Jong Il, he was the heir apparent. But that changed in May 2001, when he was arrested at Tokyo’s Narita Airport trying to visit Japan’s Disneyland. His forged Dominican passport bore the name Pang Xiong, or “Fat Bear” in Mandarin. The embarrassing affair saw Kim Jong Nam fall dramatically out of favor in Pyongyang; there are whispers that Kim Jong Un’s mother notified the Japanese authorities in order to tip succession in her own son’s favor. The diminished rival was soon ensconced in Macau, where by all accounts he relished the slot machines and various sybaritic delights of Asia’s Las Vegas. Exile wasn’t unpleasant: the father of at least six children, Kim frequently visited Europe and kept homes in Singapore and Beijing.

That perceived intimacy with the Chinese leadership might have proved fatal. Some figure that Beijing kept Kim close as a potential replacement to his brother should regime change in Pyongyang become unavoidable. Given Kim Jong Nam’s pure “Baekdu bloodline”–named after the extinct volcano considered the mythical birthplace of the Korean people–installing him as a puppet would seem an easy sell to North Korea’s elite. Some Pyongyang watchers say that North Korean defectors had also approached Kim about setting up a government in exile, and though he refused, they were planning a fresh approach in April. This may have prodded Pyongyang into action.

There is also some evidence that Kim Jong Un is in the final stage of consolidating power and moved on his half brother to eliminate any remaining rivalry. Just two weeks earlier, Kim Won Hong, the head of state security, was mysteriously purged. At the same time, the hit could be a warning to other potential defectors, especially after North Korea’s deputy ambassador to the U.K., Thae Yong Ho, defected to South Korea last August.

The elaborate plot certainly bears the hallmarks of North Korean tradecraft. In 1997, assassins shot Yi Han Yong, a cousin of Kim Jong Nam’s who defected to South Korea in the early 1980s, in the head. In 2011, North Korean agents attempted to kill another defector using a poison needle hidden in a Parker pen. On Sept. 17, 2002, Kim Jong Il admitted that North Korea had abducted 13 Japanese citizens whom the regime planned to match with North Korean spouses and raise their mixed-race progeny as superspies. Kim Jong Un has displayed little affection for kinship, executing his powerful uncle Jang Song Thaek in 2013. “It very much fits into the North Korean ‘game of thrones’ that we’ve seen develop since Kim Jong Un has been in power,” says Lind.

As Kim Jong Nam was under Beijing’s protection, Gause says the assassination is “a slap in the face for China.” The two neighbors were described by Mao Zedong more than 60 years ago as “as close as lips and teeth” but have become estranged since China began a process of reform in the late 1970s. China still accounts for 90% of North Korean trade, though not even pro-Pyongyang hard-liners in the Chinese Communist Party could defend the assassination. On Feb. 18, Beijing said it was suspending coal imports from North Korea for the rest of the year. While the assassination was not directly blamed, the timing suggests it was a primary factor. Coal makes up half the regime’s foreign-currency acquisition, bringing in some $1 billion in 2015. Pyongyang’s KCNA news agency responded by accusing China of “dancing to the tune of the U.S.”

Beijing’s import ban brings China into compliance with other U.N. sanctions following Pyongyang’s fourth nuclear test. (There has since been a fifth.) Trump insists Beijing can bring Pyongyang further to heel. “I think China has tremendous control over North Korea,” Trump told Reuters. “They could solve the problem very easily if they want to.”

In reality, however, China’s overwhelming strategic goal remains keeping the North Korean state functioning, since its collapse would likely see a flood of refugees into northeastern China, as well as a unified and U.S.-allied Korean peninsula governed by Seoul. “The Chinese would like the situation to remain the status quo,” says Steven Weber, a Korea expert at the University of California, Berkeley.

But the status quo is threatened by Pyongyang’s nuclear and missile tests. Pyongyang is believed by experts to be four or five years away from a nuclear-armed ballistic missile capable of hitting the U.S. mainland. Beijing has long pushed for a resumption of the six-party denuclearization talks–comprising North and South Korea, Japan, Russia, China and the U.S.–which ran from 2003 to 2009 before being nixed by Kim Jong Il. North Korean officials had been set for talks with former American officials in New York City–the first on American soil since 2011–until the State Department denied them visas on Feb. 25, 12 days after the assassination.

Can any nation reason with a regime that kills its own family members? That, for the moment, seems unlikely. The U.S. is handicapped by its long-standing ties to Seoul and the presence of thousands of U.S. troops in South Korea–both countries could face a counterattack if the U.S. targeted Pyongyang’s nuclear facilities. But China has regional interests of its own to consider. Even if negotiations are revived, the odds of their success are long. Several years of engagement and confidence-building would likely be needed just to bring Pyongyang’s nuclear program to the table, as well as significant concessions by Seoul, such as suspending the annual joint naval exercises with the U.S. Moreover, any deal with the regime would require overlooking abuses that the U.N. says amount to “crimes against humanity.”

To say nothing of outrages like the assassination of Kim Jong Nam. “The tragedy is that he really just wanted to be left alone,” says Lind. “But because of his blood, and his birth, he couldn’t be.” Which is a wretched lot shared by all North Koreans. 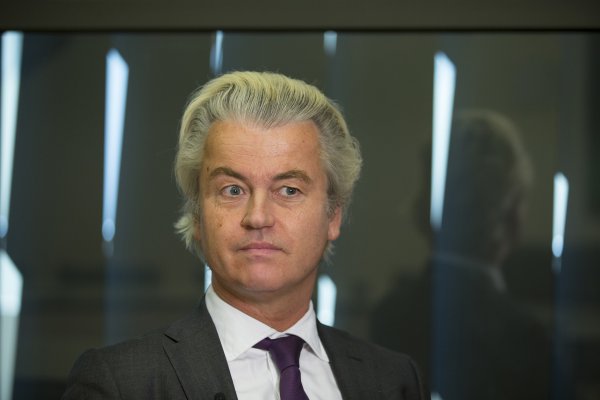 2017 Might Not Be Europe's 'Year of the Populist' After All
Next Up: Editor's Pick