Jorge Ramos: Donald Trump, I Don't Want to Be Your Friend

Jorge Ramos spoke about being an immigrant and journalist in the age of President Trump at Harvard University’s Goldsmith Awards Ceremony. Ramos provided his transcript to TIME.

No Mister Trump, I am not your enemy. But I don’t want to be your friend, either.

That’s the end of my speech. Now, let me tell you how I got there.

I am an immigrant. I am a journalist. And I am the father of Nicolas and Paola.

These three things define me.

I’ll spare you the details of my wonderful experience as a father. But I’ll just say that Paola – who is actually a Harvard Kennedy School alumni — and Nicolas taught me what is really important in life: to be yourself, to care for one another and, when needed, to defend with all your energy what you believe in.

So let me concentrate on the other two things that define me. I want to tell you what it means for me to be an immigrant and a journalist in the era of Donald Trump. I feel such a sense of mission that, at 58, I think I’ve been preparing all my life for this moment, for this fight.

This country gave me the opportunities that my country of origin couldn’t give me. I left Mexico in 1983 because of censorship. Back then you simply couldn’t criticize the Mexican president in the media. I tried and failed. So just imagine my shock when I arrived in the U.S. and everybody was criticizing the American president with no consequences. My first thought was: I love this country!

Every immigrant can tell you this story: that something pushed them out of their country of origin and that something else, just as forcefully, pulled them into their new, adopted nation.

What pulled me in was, initially, the freedom of the press (a freedom that I had never experienced before in my life). But there was also something else. I was just an immigrant and a young student at UCLA Extension, trying to re-invent my life, and the beautiful thing is that everybody treated me as an equal.

What Alexis de Tocqueville observed in his book, Democracy in America, in 1835 was still true in the 1980’s, when I arrived in Los Angeles. The concept of “equality of condition” is still a part of life in America. Of course there is plenty of racism and discrimination to go around. But every infraction, every attack and every abuse has always been confronted with that wonderful phrase in the Declaration of Independence: “All men (and women) are created equal”.

My American education was based on two principles: I can say whatever I want — as long as I’m responsible for every single word I say — and everybody is equal, regardless of the color of your skin, your accent, your country of origin, your religion or your ideas.

That’s how I grew up here. That’s what you taught me. And I embraced those two principles with all my heart.

Since then my goal has always been that all the immigrants who came after me should be treated with the same generosity with which I was treated. That wasn’t always the case. But, in general, I never felt that the immigrant tradition in the United States was at risk.

And then came Donald Trump. I never expected that the son of a Scottish immigrant, with a German grandfather and married to a Slovenian, would be such a threat to millions of foreigners and their American-born children.

I am a Mexican immigrant. He was talking about me, and millions like me. And I knew he was wrong.

Trump constantly complains about fake news. But he is spreading fake news about undocumented immigrants. He is criminalizing immigrants and making them scapegoats for our economic problems. Nothing is easier than to blame those who cannot defend themselves. If you listen to him -as I did in his speech to Congress last Tuesday- you might believe that most “illegals”, as he calls them, are “gang members, drug dealers and criminals”. That is not true.

First of all, “no human being is illegal”, as Elie Wiesel constantly reminded us. And second, immigrants are less likely to be criminals than those born in the United States, according to a study by the American Immigration Council. (Only 1.6 percent of immigrant males ages 18 to 39 end up in jail, or about half the 3.3 percent incarceration rate for the same group among the native born.)

Let me give you another example. The undocumented population has more than tripled from 3.5 million in 1990 to about 11.2 million in 2013. (Since then that figure hasn’t changed much.) In the same period, according to the FBI, violent crimes declined 48 percent. So, the more undocumented immigrants that you have, there are less cases of murder, rape, robbery and aggravated assault.

Why? The answer is simple. Immigrants, especially new immigrants, don’t want to get in trouble with the police. They just want to work and provide for their families. There are many more buenos hombres than bad hombres.

This case is closed.

Immigrants, let me tell you, are a great business. They put much more money into the system than they take out from public services. Actually, there is an “immigration surplus”. Immigrants contribute, on average, over two billion dollars every single year to the growth of the U.S. economy. If you want to see the numbers, please check the recent report by the National Academy of Sciences. (From 1994 until 2013 there was an “immigration surplus” of 54 billions dollars.)

Immigrants pay taxes, they create jobs, they are loyal consumers, they do the jobs that nobody else wants to do, they contribute to the Social Security fund (and then don’t collect because they can’t); they build our homes, harvest our food and babysit our children. And, contrary to what Trump is suggesting, immigrants are not taking jobs away from Americans.

Immigrants are a boon to our economy and our culture. And the vast majority are not criminals. Those are the facts. Don’t let Trump tell you otherwise. When it comes to undocumented immigrants, Donald Trump is the king of fake news.

As you might imagine, this is an issue that moves me and hurts me. Since Trump announced his candidacy for president, I haven’t stopped calling him out.

I asked him for an interview and he published my cell phone number online.

I asked him a question at a press conference in Iowa, and he used a bodyguard to throw me out of the room.

Donald Trump hates to be challenged. He is not used to being questioned. But that’s precisely what we have to do as journalists.

I don’t know what’s in Donald Trump’s head but I’ve heard what is coming out of his mouth. I don’t know if Trump is a racist. But I do know that he made racist and xenophobic remarks during the presidential campaign. I don’t know if he is sexist, but he made crude and misogynist statements before the election.

That’s exactly why many people don’t respect Donald Trump. He is a president desperately seeking validation and respect…and he is not getting it.

The press, now, is questioning every single word Trump says. That’s the way it should be. But that was not always the case during the run for the White House.

Donald Trump has forced reporters to re-define journalism in the 21st century and to understand that there is a very important moral and ethical component to our profession.

Yes, we have the responsibility to report reality as it is, not as we wish it would be. However, in very specific circumstances we have to go beyond that – beyond just reporting – and take a stand.

I’ve identified six areas in which we have the moral obligation to confront politicians and people on positions of authority. When it comes to racism, discrimination, corruption, public lies, dictatorships and human rights, we have to take a stand. The most important social responsibility that we have as journalists is to question those in power. If we don’t do it, nobody else will.

Now, in order to do that, you cannot be in bed with the politicians. There has to be distance. I think our position as journalists is to be on the opposite side of power. Yes, that’s where we belong.

I don’t believe that the press is “the opposition party”, as White House chief strategist, Steve Bannon, recently suggested. By definition real journalists are not partisan. Independence defines our job. But I do believe, again, that we have to be on the opposite side of power, regardless of who is in the White House (a Democrat or a Republican).

There is a beautiful word in Spanish that defines our role as journalists. It is contrapoder. Contra means “against” and poder means “power”. Believe me, I’ve looked for the right translation and couldn’t find it. “Countervailing power” is the closest translation there is. Still, not precise.

Bannon’s idea of the press is very similar to Trump’s. A couple of weeks ago Trump sent a tweet that said: “FAKE NEWS media…is not my enemy, it is the enemy of the American People. SICK!” Apparently Trump thinks that only reporters who have a friendly or non-antagonistic relationship with him can accurately report about his government. Again, he is wrong. The last thing an independent and trustworthy reporter should do is to be a friend of the president. I don’t want to be his amigo.

Trump sees respected news organizations like The New York Times, The Washington Post and CNN as the enemy. As it is very clear so far, I cannot change Donald Trump’s mind. But I don’t see the press as the enemy of the president or the American people. We’re just doing our job, which is to hold him accountable.

Now, if Trump attacks the press and the first amendment, I don’t mind to be seen by him as the enemy. I’ll always defend freedom of the press.

If Trump attacks our democracy and our judges, I don’t mind to be seen by him as the enemy. And if he insists on unfairly blaming immigrants for all our economic and national security problems, again, I don’t care is he sees me as the enemy. That’s his problem. I’m just doing my job as a journalist.

As I said at the beginning of this speech, Mister Trump, you and your government are not my enemy. But I don’t want to be your friend, either. 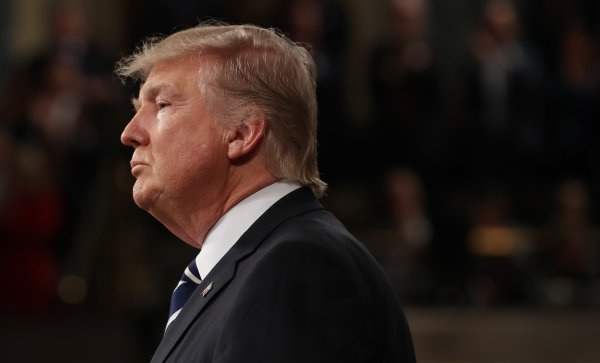