Trump Wants to Highlight Immigrant Crime. Democrats Aren't the Only Ones Booing

Before President Trump’s first joint address to Congress, House Democratic leaders urged their members to be on their best behavior to avoid being “outclassed.”

But there was one proposal in Trump’s hour-long speech that tested their resolve: Publicizing immigrant crime.

“I have ordered the Department of Homeland Security to create an office to serve American victims. The office is called VOICE: Victims Of Immigration Crime Engagement,” the President said, inviting what sounded like scattered boos from the chamber. “We are providing a voice to those who have been ignored by our media, and silenced by special interests.”

The proposal was not new. Trump instructed Homeland Security to develop the office in his Jan. 25 executive order on interior security. Throughout the 2016 campaign, he highlighted the stories of victims of crimes committed by undocumented immigrants, with “angel moms” making appearances at several of his rallies. And three of his official guests at the address had loved ones who were killed by undocumented immigrants.

Many immigration advocates watching at home were having a similar reaction to Democratic lawmakers.

“Obviously we should care about the victims of crime in general, but what concerns us is painting a false picture that immigrants are committing crimes in higher numbers than non-immigrants or that immigrants are not hard-working, law abiding people,” says Lee Gelernt, the Deputy Director of the American Civil Liberties Union’s national Immigrants’ Rights Project.

The president has repeatedly stressed that his focus is only on the “bad ones,” like immigrants who join gangs or sell drugs or kill. “Bad ones are going out as I speak tonight as I have promised,” Trump said Tuesday.

It’s true that hardened criminals are a priority, as they were under President Obama, but the Administration has also expanded the offenses that make an illegal immigrant a priority for deportation. And a recent memo from DHS made clear that any undocumented immigrant caught by officials, even if they have not committed a serious crime, can be arrested and placed in deportation proceedings.

The orders have already had a chilling effect on the immigrant community. Parents are scrambling to get documents in order to make sure their children are taken care of in the case of their deportation. Children are growing increasingly scared their parents won’t be home when they get back from school. And one California pastor is setting up beds in his church for congregants who need a safe haven.

Cornell University Law professor and immigration law attorney Stephen Yale-Loehr says he and other attorneys at his firm have faced an influx of calls to host “Know Your Rights” seminars within communities. While he doubts the VOICE office will bring about major change, Yale-Loehr says it will serve as a powerful way for the President to reinforce his claim that immigrants are inherently dangerous—a theme he has repeatedly sounded since he said Mexico is sending rapists to the U.S. in his campaign launch.

“It benefits his public relations team in showing that we need to crack down on illegal immigration,” Yale-Loehr says. “Any time an illegal immigrant commits a crime he can use that office to highlight it.”

The creation of the office is already facing pushback. A group of immigrants and reform advocates gathered in Washington on Wednesday for a press conference where many denounced the president’s rhetoric about criminal immigrants. Senate Minority Leader Chuck Schumer called the creation of the office “ridiculous” in an interview with CBS on Wednesday morning. “The overwhelming majority of immigrants are law-abiding,” he said.

Immigration hardliners say issue isn’t that all undocumented immigrants are criminals, but that crimes committed by them should not have happened in the first place, since they shouldn’t be in the U.S.

“Most illegal immigrants are not bad hombres,” says Mark Krikorian of the Center for Immigration Studies. “Highlighting some victims of criminal aliens doesn’t suggest that all immigrants are criminals. Shame on those advocacy groups that are trying to minimize the experience of these families.”

Dan Stein, the president of the Federation for American Immigration Reform says Democrats will likely pay a price politically for reacting to the creation of an office that helps victims of crime with boos.

“What [President Trump] did yesterday on immigration policy was to basically beat the Democrats at their own game and show how powerful the bully pulpit is,” Stein says. “They don’t seem to grasp that they’re striking at one of the only two things that holds us together as a highly diverse community—respect for the law.”

Krikorian says criminal aspect is only “one piece of the immigration puzzle,” which is why he applauded President Trump for discussing curbs to legal immigration during Tuesday’s address. “What I saw was the more important part—the emphasis on the jobs issue and reference to legal as well as illegal immigration,” he says.

During the Tuesday night address, Trump suggested that he’d be open to reforming the legal immigration system and repeated his belief that an immigration system based on merit rather than family ties could be good for the country.

“I believe that real and positive immigration reform is possible, as long as we focus on the following goals: to improve jobs and wages for Americans, to strengthen our nation’s security, and to restore respect for our laws,” he said.

The speech was light on details about what the President would want in an immigration reform package. While those who champion tougher standards are looking forward to what’s next, pro-immigration advocates are skeptical. Their main concern is pushing back on lingering notions of their collective criminality, as was displayed last night when low and grumbling boos could be heard in the House chamber.

At a press conference on Wednesday, speakers shared their and their family members stories of immigrating to the U.S. “The ability for us to actually come out and tell our own stories is what’s going to really get the American public [more] than saying that immigrants commit less crime,” said Erika Andiola, an undocumented immigrant and former press secretary of Sen. Bernie Sanders.

Gelernt urges people ought to think about the immigrants they know in their communities.

“Then think about whether the narrative the Administration is pushing fits with what they know about the immigrants in their community,” he says. 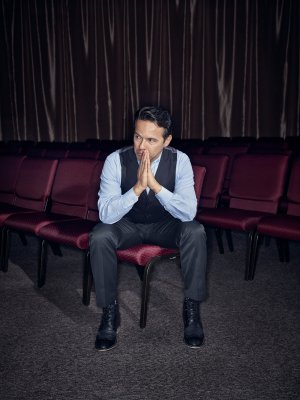