U.S. space tourist Richard Garriott gestures after putting on a space suit at the Baikonur cosmodrome, in Kazakhstan, on Oct. 12, 2008.
AFP—AFP/Getty Images
By Melissa Chan

The pair who paid SpaceX to take them on a historic trip around the moon can expect breathtaking views and a life-altering experience when they set out for space next year, according to Richard Garriott, a video game mogul and onetime space voyager.

Garriott, who ventured into space in 2008 as the world’s sixth private space traveler, heralded SpaceX’s announcement this week as a major milestone for space exploration. He said the two passengers whom SpaceX has chosen for its 2018 mission, who have not been publicly identified, can buckle up for a “pinnacle life experience.”

“Seeing the Earth from space is a profoundly life-changing event,” he told TIME on Wednesday.

SpaceX on Monday said it plans to take two people, who paid a “significant deposit,” on a weeklong trip around the moon and back. It would be the first time in 45 years that humans will have returned to deep space. SpaceX said the pair will “travel faster and further into the Solar System than any before them.”

Garriott, a 55-year-old Texas computer game developer, said the feat would push human beings out of lower orbit and into new frontiers. “This proves that we are in a new golden age of space exploration,” he said. “This is a huge deal. It would be hard to overstate the importance. We’re beginning to push forward in the solar system again.”

Garriott went to the Internal Space Station in 2008 aboard Russia’s Soyuz TMA-13. The journey to the Space Station — which is about 250 miles up, about the same as the distance from New York City to Washington, D.C. — was 12 days long and cost him $30 million, he said.

“You’re traveling at 17,000 miles per hour. You go all the way around the Earth in 90 minutes. That means you see a sunrise or a sunset every 45 minutes. You cross entire continents in 15 minutes,” he said of his time in space. SpaceX’s guests can expect an even more dramatic experience since they’ll be flying away from Earth rather than around it.

Garriott said he experienced what astronauts have called the “overview effect,” a cognitive shift in awareness about the world, when he looked out of the space station’s window. “It’s a feeling like, ‘I get it. I now understand the Earth at a much deeper level than I ever did,’” he said. “It was literally a physical moment. The hairs stand up on the back of your neck and arms.”

“It’s a pinnacle life experience,” he added. “This journey is not one to underestimate.” 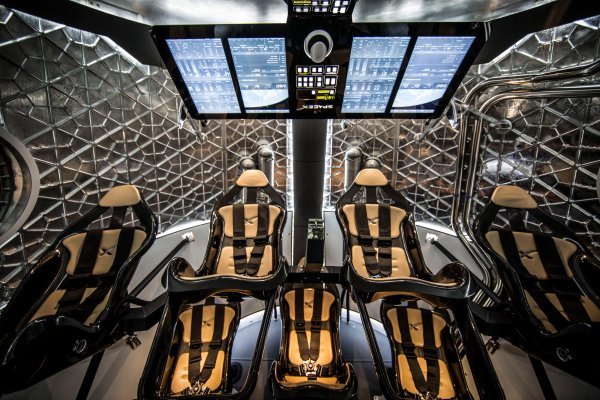 Elon Musk's Moon Mission Is Exciting, Audacious ... and Iffy
Next Up: Editor's Pick