Katy Perry and Orlando Bloom are taking a break.

“Before rumors or falsifications get out of hand, we can confirm that Orlando and Katy are taking respectful, loving space at this time,” a statement to PEOPLE from both of their reps reads. The couple dated for a little over a year.

The stars were spotted at the annual Vanity Fair Oscars party on Sunday after weeks of jet-setting travels apart.

The two continued their tradition of only posing together inside events, and cozied up for the camera – Perry, 32, in a shimmering, bronze gown and still sporting her platinum locks and Bloom, 40, in a dapper black tux.

However, an onlooker told PEOPLE the duo didn’t interact much aside from posing for the photo together and mainly mingled with their own friends.

“Katy didn’t spend much time with Orlando,” said the source. “They got together for a photo, but that was about it.”

(Bloom also posed with Perry’s pup, posting the photo to Instagram on Monday.)

The new year has taken both stars overseas, with Bloom just returned from a UNICEF mission to Diffa, the southeast region of Niger. In late January, Bloom also visited a high school in Greater Manchester, England, to visit a drama class with his own former teacher.

Perry’s been busy promoting and performing her new single, “Chained to the Rhythm” – first at the Grammys in Los Angeles, and then in the U.K. at the BRIT Awards. She’ll perform again at the iHeartRadio Music Awards on Sunday in Los Angeles.

The couple seemed to be doing well — Bloom celebrated Perry’s 32nd birthday with her back in October at the singer’s 1950s-themed bash. The pair even went all out for Halloween with the singer transforming herself into Hillary Clinton while Bloom dressed up as a cartoonish Donald Trump.

Bloom shared an Instagram video of himself and Perry at Burning Man in September.

The two spent some time apart back in November, though, with Perry campaigning for Clinton in the fall while Bloom has been in Shanghai, China, filming Smart Chase: Fire & Earth.

At one point in time, signs pointed to a lasting relationship — a source told PEOPLE in August that the love birds were headed toward an engagement.

“[Bloom] always gushes about Katy and thinks she is amazing in a million ways,” the source said. “He would love to settle down with Katy and have more kids. He hasn’t been this serious about a girl since Miranda [Kerr].”

Kerr and Bloom, parents to 6-year-old Flynn, divorced in 2013 after three years of marriage. Perry began dating John Mayer in 2012 and had an on-again, off-again relationship with the singer until she began dating Bloom. 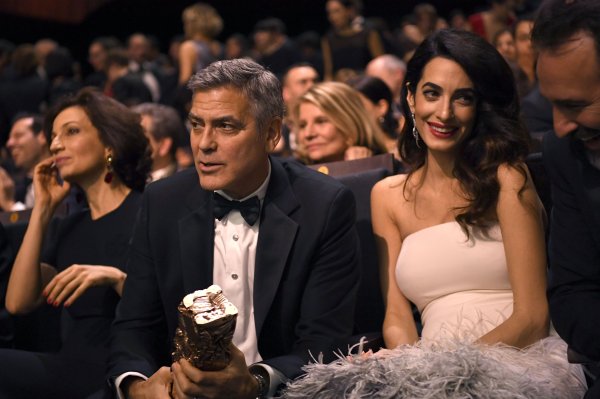 George and Amal Clooney Shop for Twins' Nursery Furniture in Paris
Next Up: Editor's Pick