President Trump's Speech Was Given at a Seventh-Grade Reading Level

President Donald Trump’s first joint address to Congress was delivered at a seventh-grade reading level, according to a common measure of comprehension that accounts for sentence length and the number of syllables in each word. According to TIME’s analysis, that makes Trump’s address the most accessible–and also the least complex–of any president’s first joint address going back to Ronald Reagan.

While President Obama’s Feb. 24, 2009 speech was at a ninth-grade reading level, for example, thanks to his use of words like “equivocation” and “protectionism,” Trump favored shorter sentences with fewer mouthfuls. You can compare the six speeches here:

Of course, the intricacy of the language is not the primary factor in what makes an effective speech. Trump’s speechwriters could have goosed the grade level by using the thesaurus function in Microsoft Word and choosing the longest synonym for every term, but the result would have been incomprehensible. (Somehow, the phrase “Designate America Momentous Again” feels less hat-worthy.) But these scores do tell us something about whether the authors wish to reach the widest possible audience or project a level of intellectual acumen. Opting for the former is congruent with the populist message peppered throughout Trump’s first major address. 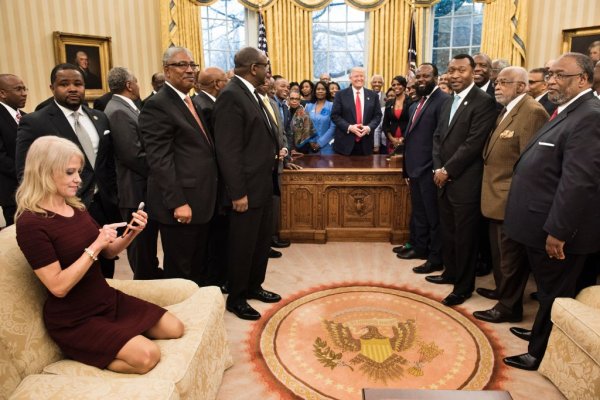 Kellyanne Conway Says She ‘Meant No Disrespect’ by Kneeling on White House Couch
Next Up: Editor's Pick