Every Book Recommendation Bill Gates Has Ever Published

Bill Gates is a very busy man, but as his admirers know, he makes time to read. The Microsoft co-founder and philanthropist regularly reviews books on his website and formulates lists of his favorite books of the year, or the best ones on a given subject. Here is every book he’s ever recommended on his website, from highly academic texts to The Hunger Games.

Note: In the assorted reviews category, we left off books that had been included in other lists — but when the same book appeared on multiple reading lists, we allowed the repetition.

The Gene by Siddhartha Mukherjee

The Myth of the Strong Leader by Archie Brown

The Grid by Gretchen Bakke

How Not to be Wrong by Jordan Ellenberg

The Vital Question by Nick Lane

The Power to Compete by Ryoichi Mikitani and Hiroshi Mikitani

Sapiens: A Brief History of Humankind by Noah Yuval Harari

The Road to Character by David Brooks

Being Nixon: A Man Divided by Evan Thomas

Mindset: The New Psychology of Success by Carol S. Dweck

The Vital Question by Nick Lane

Hyperbole and a Half by Allie Brosh

The Magic of Reality by Richard Dawkins

What If? by Randall Munroe

On Immunity by Eula Biss

How to Lie With Statistics by Darrell Huff

Should We Eat Meat? by Vaclav Smil

On Immunity by Eula Biss

How Asia Works by Joe Studwell

How to Lie with Statistics by Darrell Huff

Capital in the Twenty-First Century by Thomas Piketty

How Asia Works by Joe Studwell

The Rosie Effect by Graeme Simsion

Making the Modern World: Materials and Dematerialization by Vaclav Smil

The Fever: How Malaria Has Ruled Humankind for 500,000 Years by Sonia Shah

House on Fire: The Fight to Eradicate Smallpox by William H. Foege

Smallpox: The Death of a Disease by D.A. Henderson

Infections and Inequalities: The Modern Plagues by Paul Farmer

The Rosie Project: A Novel by Graeme Simsion

The Sixth Extinction: An Unnatural History by Elizabeth Kolbert

10 Books Melinda and I Recommended to the TED Crowd, 2014

The Better Angels of Our Nature by Steven Pinker

Getting Better by Charles Kenny

The Man Who Fed the World by Leon Hesser

However Long the Night by Aimee Molloy

Change by Design by Tim Brown

Mighty Be Our Powers by Leymah Gbowee

The Box by Marc Levinson

The Most Powerful Idea in the World by William Rosen

Harvesting the Biosphere by Vaclav Smil

The World Until Yesterday by Jared Diamond

Why Does College Cost So Much? by Robert B. Archibald and David H. Feldman

The Bet by Paul Sabin

The Catcher in the Rye by J.D. Salinger

The World Until Yesterday: What Can We Learn from Traditional Societies? by Jared Diamond

(Bonus: Guns, Germs, and Steel: The Fates of Human Societies by Jared Diamond)

The Box: How the Shipping Container Made the World Smaller and the World Economy Bigger by Marc Levinson

However Long the Night: Molly Melching’s Journey to Help Millions of African Women and Girls by Aimee Molloy

How Children Succeed: Grit, Curiosity, and the Hidden Power of Character by Paul Tough

Japan’s Dietary Transition and Its Impacts (Food, Health, and the Environment) by Vaclav Smil and Kazuhiko Kobayashi

Made in the USA: The Rise and Retreat of American Manufacturing by Vaclav Smil

Whistling Vivaldi: How Stereotypes Affect Us and What We Can Do (Issues of Our Time) by Claude Steele

Patriot and Assassin by Robert Cook

Great Books on Science and Innovation, 2013

Smallpox: The Death of a Disease by D. A. Henderson

House on Fire: The Fight to Eradicate Smallpox by William H. Foege

Where Good Ideas Come From by Steven Johnson (Book Review)

For the Love of Physics by Walter Lewin (Book Review)

Harvesting the Biosphere by Vaclav Smil

The Signal and the Noise: Why So Many Predictions Fail—but Some Don’t by Nate Silver

The Price of Inequality: How Today’s Divided Society Endangers Our Future by Joseph E. Stiglitz

Why Nations Fail: The Origins of Power, Prosperity, and Poverty by Daron Acemoglu and James A. Robinson

The Most Powerful Idea in the World: A Story of Steam, Industry and Invention by William Rosen

Tap Dancing to Work: Warren Buffett on Practically Everything, 1966-2013 by Carol J. Loomis

The Better Angels of our Nature: Why Violence has Declined by Steven Pinker

The Quest by Daniel Yergin

Moonwalking with Einstein by Joshua Foer

One Billion Hungry: Can We Feed the World? by Gordon Conway

A World-Class Education by Vivien Stewart

The City That Became Safe: New York’s Lessons for Urban Crime and Its Control by Franklin Zimring

A Nation of Wusses: How America’s Leaders Lost the Guts to Make Us Great by Ed Rendel

The Art of Being Unreasonable: Lessons in Unconventional Thinking by Eli Broad

Moonwalking with Einstein: The Art and Science of Remembering Everything by Joshua Foer

Awakening Joy: 10 Steps That Will Put You on the Road to Real Happiness by James Baraz and Shoshana Alexander

The Hunger Games by Suzanne Collins

The Devil in the White City by Erik Larson

The Art of War by Sun Tzu

The Grand Design by Stephen Hawking and Leonard Mlodinow

Life of Pi by Yann Martel

A New Kind of Science by Stephen Wolfram

The Alchemist by Paul Coelho

The Better Angels of our Nature Steven Pinker

The Quest by Daniel Yergin

Deng Xiaoping and the Transformation of China by Ezra Vogel

The Cost of Hope by Amanda Bennett

Limits to Growth: The 30-Year Update by Donella Meadows

Abundance: The Future is Better Than You Think by Peter Diamandis and Steven Kotler

The Man Who Stayed Behind by Amanda Bennett

The Rise and Fall of American Growth by Robert J. Gordon

The Idealist: Jeffrey Sachs and the Quest to End Poverty by Nina Munk

The Great Escape: Health, Wealth and the Origins of Inequality by Angus Deaton

The Path Between the Seas: The Creation of the Panama Canal by David McCullough

Value-Added Measures in Education: What Every Educator Needs to Know by Douglas N. Harris

Interventions: A Life in War and Peace by Kofi Annan

Science Business: The Promise, the Reality, and the Future of Biotech by Gary P. Pisano

The Checklist Manifesto: How to Get Things Right by Atul Gawande

The Cat’s Table by Michael Ondaatje

Titan II: A History of a Cold War Missile Program by David Stumpf

Why Don’t Students Like School?: A Cognitive Scientist Answers Questions About How the Mind Works and What It Means for the Classroom by Daniel T. Willingham

That Used to Be Us: How America Fell Behind in the World It Invented and How We Can Come Back by Thomas L. Friedman and Michael Mandelbaum

The Emperor of All Maladies: A Biography of Cancer by Siddhartha Mukherjee

World on the Edge: How to Prevent Environmental and Economic Collapse by Lester R. Brown

Unlocking the Gates: How and Why Leading Universities Are Opening Up Access to Their Courses by Taylor Walsh

How to Spend $50 Billion to Make the World a Better Place ed. Bjørn Lomborg

Poor Economics: A Radical Rethinking of the Way to Fight Global Poverty by Abhijit V. Banerjee and Esther Duflo

Prime Movers of Globalization: The History and Impact of Diesel Engines and Gas Turbines by Vaclav Smil

A Champion’s Mind: Lessons From a Life in Tennis by Pete Sampras

Outliers: The Story of Success by Malcolm Gladwell

Class Warfare: Inside the Fight to Fix America’s Schools by Steven Brill

Health Care Will Not Reform Itself: A User’s Guide to Refocusing and Reforming American Health Care by George C. Halvorson

Beyond Smoke and Mirrors: Mexican Immigration in an Era of Economic Integration by Douglas S. Massey, Jorge Durand and Nolan L. Malone

Dirt and Disease: Polio Before FDR by Naomi Rogers

The Grid: A Journey Through the Heart of Our Electrified World by Phillip F. Schewe

Beyond the Crash: Overcoming the First Crisis of Globalization by Gordon Brown

The Foundation: A Great American Secret; How Private Wealth is Changing the World by Joel L. Fleishman

Who’s Teaching Your Children?: Why the Teacher Crisis Is Worse Than You Think and What Can Be Done About It by Vivian Troen and Katherine C. Boles

The Making of a Tropical Disease: A Short History of Malaria by Randall M. Packard

Too Big to Fail: The Inside Story of How Wall Street and Washington Fought to Save the Financial System — and Themselves by Andrew Ross Sorkin

The World Is Flat: A Brief History of the Twenty-first Century by Thomas L. Friedman

Showing Up for Life: Thoughts on the Gifts of a Lifetime by Bill Gates Sr.

Open: An Autobiography by Andre Agassi

Give Smart: Philanthropy that Gets Results by Thomas J. Tierney and Joel L. Fleishman

Einstein: His Life and Universe by Walter Isaacson

Creating the Twentieth Century: Technical Innovations of 1867-1914 and Their Lasting Impact by Vaclav Smil

Broken Genius: The Rise and Fall of William Shockley, Creator of the Electronic Age by Joel N. Shurkin

A Separate Peace by John Knowles

Smallpox: The Death of a Disease – The Inside Story of Eradicating a Worldwide Killer by D.A. Henderson

Mountains Beyond Mountains: The Quest of Dr. Paul Farmer, a Man Who Would Cure the World by Tracy Kidder

The Earth’s Biosphere: Evolution, Dynamics, and Change by Vaclav Smil

Hot, Flat, and Crowded: Why We Need a Green Revolution – and How It Can Renew America by Thomas L. Friedman

Energy at the Crossroads: Global Perspectives and Uncertainties by Vaclav Smil

Energies: An Illustrated Guide to the Biosphere and Civilization by Vaclav Smil

Big History: From the Big Bang to the Present by Cynthia Stokes Brown

The End of Poverty: Economic Possibilities for Our Time by Jeffrey Sachs

Global Catastrophes and Trends: The Next Fifty Years by Vaclav Smil

Collapse: How Societies Choose to Fail or Succeed: Revised Edition by Jared Diamond

Stretching the School Dollar: How Schools and Districts Can Save Money While Serving Students Best, ed. Frederick M. Hess and Eric Osberg

Educational Economics: Where Do School Funds Go? by Marguerite Roza

The Rational Optimist: How Prosperity Evolves by Matt Ridley

Why America Is Not a New Rome by Vaclav Smil

Life Is What You Make It: Find Your Own Path to Fulfillment by Peter Buffet

In FED We Trust: Ben Bernanke’s War on the Great Panic by David Wessel

Work Hard. Be Nice.: How Two Inspired Teachers Created the Most Promising Schools in America by Jay Mathews

Sustainable Energy – Without the Hot Air by David JC Mackay 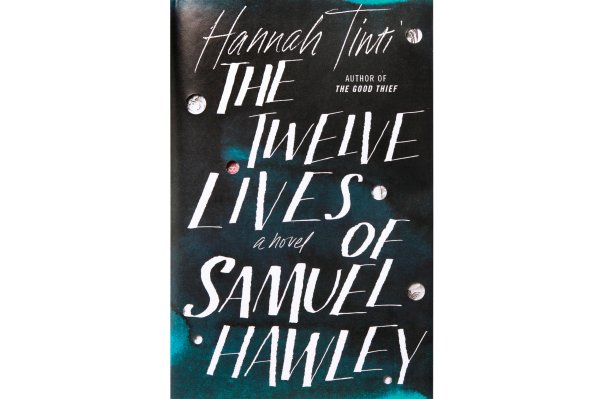 Review: In 'The Twelve Lives' of Samuel Hawley,' Hercules Wields a Shotgun
Next Up: Editor's Pick