The 5 Virtual Reality Films You Should Experience Right Now

As Virtual Reality is making its bid to become more mainstream, an ever-growing number of experiences are being created. They range in length, aesthetics, narrative style, purpose, interactivity and subject matter. What they do have in common is an unmistakable experimental feel.

The grammar of the medium is still being written and debates over best practices can be heated. Last year, at SxSW, Chris Milk, the VR pioneer behind with.in (formerly VRSE), chastised the audience for still using the codes of filmmaking. “With VR, you’re not interpreting the medium: you’re in it; which means that the medium is disappearing, that your consciousness becomes the medium,” he claimed.

In fact, there’s no consensus over what qualifies as virtual reality. For some, it’s any 360 degrees world that you can enter via a headset. Others argue that the audience needs to have more agency than merely looking around; that they need to be able to move through the virtual space. In which case, VR is not restricted to the use of a headset, but can also be an installation where projections transform the room the visitors are in.

Wondering where to start? Look no further. Every month, we’ll suggest a few recent experiences to try out.

The Most Memorable of 2016: Notes on Blindness

Though hailed as an “empathy machine” when it made its first rounds, VR has proven to have a more complex relationship with eliciting compassion than originally promised. The audience’s response is contingent not merely on the medium used, but also, and mostly, on the story being told and whether or not the technology employed suits it. Notes on Blindness, based on the recordings made by Australian author John Hull after he lost his sight and learn to cope with it in the early 1980s, is a prime example of how to harness the unique qualities of VR. The immersive environment is inspired by a scene from the movie “Daredevil,” where the blind superhero is able to find and fight his enemy thanks to the different sound water drops make as they land on different objects.. “Unlike many immersive projects, ours is entirely predicated on sound”, explains Amaury La Burthe, one of the creators. “The only visuals are contours of what you hear: a dog, a choir, kids playing in a park.” Particularly unsettling is the moment where you, as John Hull, step out of the house after a heavy snowfall and all the noises that you’ve come to depend on are muffled. “Notes on Blindness” is an effective way to give the viewers a sense of what it’s like to rely on your other senses to orient yourself.

Lincoln in the Bardo
Graham Sack

From the Page to the Phone: Lincoln in the Bardo

To accompany the release of Georges Saunder’s latest novel “Lincoln in the Bardo”, a fictitious account of the night President Lincoln went to visit his son’s, Willie, final resting place, The New York Times has produced an immersive narrative short. “Not every book would make sense in VR. This one did because there’s a strong sense of setting −a haunted cemetery over the course of one night− in which you could situate the viewer. Also, the original story is structured in such a way that you have different ghosts interacting and there’s a lot of dialog. This created the opportunity to imagine a piece with multiple points of interests, where specters appear from different angles to surprise and engage the viewer”, explains Graham Sack, the director. He approached the project with immersive theater in mind. “In both you don’t control where the audience looks; rather, you have to rely on persuasion tactics”, adds the 35 year-old. He casted live-performance actors and directed them as one would within a play, with the notable exception that the scene was broken down into hundreds of singular parts. While some of it was shot on location, each of the spirit where filmed independently in front of a green screen to allow for special effects to be added in post-production. The challenge then became ensuring that everyone lined up perfectly, physically and emotionally, in the finished unified piece. The result is impeccable. As you’re introduced to the inhabitants of Georgetown’s Oak Hill Cemetery, you’re left feeling like one of them; an uncanny, almost out-of-body experience.

From “Clouds Over Sidra” to “The Displaced”, “Forced From Home” or “Four Walls”, to name but a few high profile ones, many VR experience focus on the lives of refugees. Still, there’s always room for new, compelling ways to share these stories. When filmmaker Angel Manuel Soto sought to share Qusai Bashir Masaama’s story, he was confronted with the challenge of telling the harrowing account of the Syrian teenager being confined to a wheelchair after being shot in the back by a sniper while retaining the 14-year-old’s jaunty nature. “When he was telling us about the incident, it was very descriptive. He could recall every detail. How it looked. How it felt. It was terrifying to imagine everything he went through. Yet, he spoke about it the way a child does, with innocence and a smile”, recalls the director of “Bashir’s Dream”. The solution: to combine footage of Bashir’s current living situation in Jordan with animations that speak of past events and future dreams. The transitions between the two are clever and harmonious. Each scene is just the right length and pace, giving you time to fully take in both what is shown and what the narrator is saying. The whole comes across as beautifully simple and effective.

When it initially came out in 2012, the interactive documentary Bear 71 made quite a stir. It juxtaposed the biography of a female grizzly bear, labeled 71, with an abstracted 3D interpretation of its habitat, Banff National Park, and surveillance footage that captured other animals whereabouts. The goal was to make the audience empathize with the situation wildlife face: their lives are put at risk as their roaming grounds are taken over by human infrastructures. Given the intent, it’s no surprise that its creators would eventually release a VR version. “In fact, the project was always conceived to be an immersive experience, but the technology at the time only allowed us to display it on flat screens”, says Loc Dao, Chief Digital Officer at the National Film Board of Canada, which produced the piece. Indeed, moving through the 3D rendered space feels much more natural in VR than it did on a computer monitor. Still, it took imagination to tailor the existing standard footage to 360 degrees displays. “For the trail cams, we were inspired by Hunger Games, where the information is projected above the world in a somewhat omniscient way”, explains Dao. An apropos reference, since Bear 71 is very much about the intersection of humans, nature and technology. Beyond the compelling narrative, it proves to be an interesting study in how to adapt an interactive story for different platforms.

History Steps into the Future: My Brother’s Keeper

To hype the debut of the second season of “Mercy Street”, a tv-drama that takes place during the Civil War, PBS released an original VR experience in which two estranged brothers are fighting on opposite sides. “When we were in Virginia producing the show surrounded by re-enactor, we thought it would be great to shoot them in 360 degrees to bring history to life in a new way. But we quickly realized that having our crew and cameras amongst them would be too disruptive”, recalls Don Wilcox, Executive Producer at PBS. Instead, they crafted an original story and hired to independent filmmakers with experience in VR, Connor Hair and Alex Meader, who deployed different cinematographic techniques in an exceptionally deliberate way. They set the tense atmosphere through wide shots of wheat fields and sparse woodlands in which some of the 150 hired re-enactors appear walking towards the frontlines; resorted to close-ups of the leads as they reflect on their uneasy situation to establish who the protagonists are and make them more relatable; captured battle scenes in slow motion to dramatize combat. And, in a bid to steer the gaze of the viewer when the siblings meet on the grounds of Antietam, the directors, opted to narrow the field of vision using a blur that is supposed to represent the smoke of gunfire. However, its heavy-handedness initially makes it seem like a mistake. A more subtle haze would have felt more real. VR being in its infancy, it comes as no surprise that there’s still a lot of room for improvement, but it’s nice to see what creators are experimenting with. 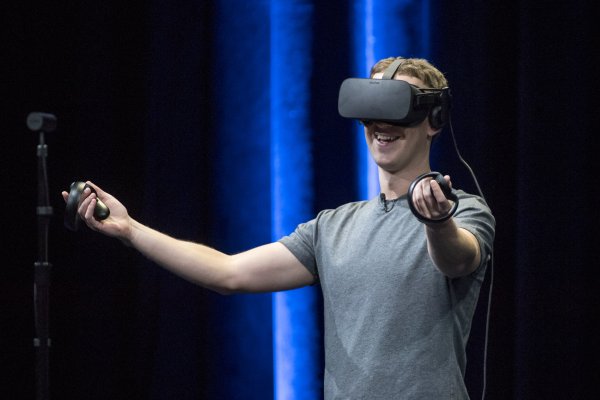 One of the Best Virtual Reality Headsets Just Got Cheaper
Next Up: Editor's Pick