A French historian was arrested and detained for 10 hours at the George Bush Intercontinental Airport in Houston after flying in from Paris to attend a symposium at Texas A&M University.

Henry Rousso, a pre-eminent scholar on the Holocaust, wrote about the recent ordeal for the Huffington Post. Rousso said a policeman who took issue with his tourist visa interrogated him for several hours on Feb. 22, including “the recording of my fingerprints and a search of the body.” The policeman suspected Rousso was traveling to the U.S. to work “illegally” after noting his recently issued J-1 visa (a non-immigrant visa issued to academics) expired this past January.

Rousso was eventually allowed to enter the U.S. at 1.30 a.m., but only after a colleague called “the president of Texas A&M, who immediately alerted a law professor in charge of immigration issues,” he later learned. “Without them, I would have probably been handcuffed, chained, and shackled back to Paris.”

Richard J. Golsan, director of the Center for Humanities Research at Texas A&M, who invited Rousso to the conference, told CNN that Rousso was left “shaken” by the incident. “At this point he loves this country but is frankly disturbed about what is going on.”

U.S. Customs and Border Protection (CBP) did not immediately respond to TIME’s request for comment.

The U.S. Department of Homeland Security Immigration and Customs Enforcement (ICE) told CNN: “The United States has been and continues to be a welcoming nation. Applicants for admission bear the burden of proof to establish that they are clearly eligible to enter the United States. In order to demonstrate that they are admissible, the applicant must overcome all grounds of inadmissibility.” 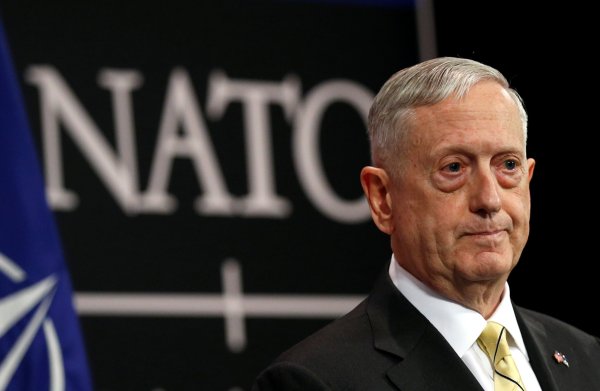 Watch Live: Secretary of Defense Mattis and the NATO Secretary General Discuss the Fight Against ISIS
Next Up: Editor's Pick