'Here's to the Ones Who Lose': Watch James Corden Spoof the Oscars Emma Stone-Style

James Corden gives his best shot at snagging the Best Actress trophy from Emma Stone in his newest Late Late Show parody video. Dressed up in a periwinkle sweater and auburn wig in the exact same style that Stone wore for La La Land, Corden recreates the iconic “Audition” scene (with the original Gosling cameo)—but replaces the song’s lyrics with a story to match Sunday night’s unforgettable Oscars snafu, in which La La Land mistakenly thought they had won Best Picture before the correct winner (Moonlight) was announced.

“Was this a mixup, a conspiracy, a fix-up? Or was Warren Beatty just blind?” he sings to the soaring tune, on the verge of tears. “Here’s to the ones who lose. God I need so much booze. Here’s to the ones who hope. Who switched that envelope?” Corden’s timely jokes make this parody uncannily on point.

“So here’s to the Ryans who hold back from cryin’, producers and Chrissy Teigen’s man. And here’s to my sense of shock—more stunned than The Rock,” he continues to quip.

To get a full sense of Corden’s acting (and singing) chops, watch the full video, above. Next question: is this Corden’s audition for the role of Academy Awards host in 2018? Or is he looking to make the switch to Oscar-worthy film acting himself? Only time will tell, but here’s to the fools who dream of much more Corden onscreen. 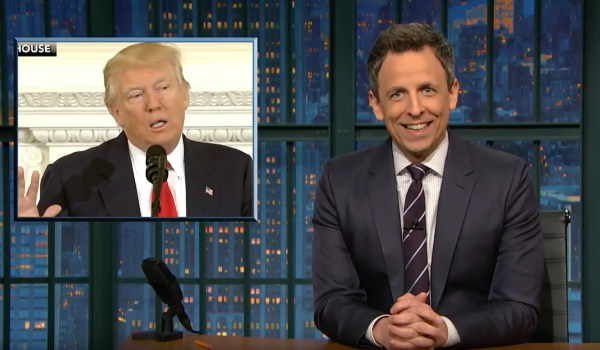 Here's What Seth Meyers Predicts Donald Trump Will Do at His Classy First Address to Congress
Next Up: Editor's Pick