After a troubled first month in office, President Trump aims to reset his agenda with the American people through his first speech to a joint session of Congress Tuesday.

The Joint Address to Congress—not technically called a State of the Union because he’s in his first year—comes at a pivotal moment for the new President, who is preparing for the crushing reality of implementing his agenda. Even with once-in-a-generation unified control over the White House and Congress, Republicans are a party divided at a time when the country is already polarized.

Unlike some past presidential addresses, the speech won’t be a laundry list of his legislative priorities, officials said, but rather an opportunity to regain control of how those issues are viewed by the American people.

“The theme will be the renewal of the American spirit,” White House spokesman Sean Spicer said Monday. “He will invite Americans of all backgrounds to come together in the service of a stronger and brighter future for our nation.”

A novice politician whose longest meeting in the Capitol was the luncheon following his inauguration, Trump has largely remained on the sidelines as House Speaker Paul Ryan has taken the lead on drafting the detailed bills to repeal and replace Obamacare and reform the nation’s tax code. Trump, who has never been one for details, will instead try to outline his populist vision for a more nationalistic America, in which borders are secure, ISIS is crushed, trade agreements are reworked and alliances are subject to renegotiation, aides said.

The speech will mark Trump’s latest effort to regain his footing after a rocky first five weeks in office, in which he has been stymied by the courts, the inertia of the federal government and his own team’s clumsiness. Trump, who has called his Administration a “fine-tuned machine,” will seek to rebut reports of chaos and indecision in the ranks.

Previewing the speech, White House officials said the it would feature a “recounting of promises made and promises kept.” That will include a list of executive actions he’s signed on everything from reducing regulations to his controversial ban on travel from seven Muslim-majority countries. (The latter remains blocked by a federal appeals court, though the White House promises a replacement order shortly after the speech.) The White House emailed a list of some of Trump’s early accomplishments to supporters Monday afternoon, along with information on how to watch the address.

The optics of the staid House chamber may not favor the novice politician, whose workmanlike speaking style and penchant for sometimes-furious digressions in response to perceived slights could come off as inappropriate for the venue.

And already there are signs that the message he will be offering to the public will differ from the agenda Republicans in Congress are preparing for. Trump told the nation’s governors this weekend that he will discuss a plan to boost infrastructure spending—one that won’t be included in his budget and likely won’t be taken up in Congress until next year, if at all.

On Monday, the White House distributed talking points for the speech to Republican allies, declaring, “It will be a speech addressed to ALL Americans AS Americans—not to a coalition of special interests and minor issues.” Officials said Monday that Trump is not slated to repeat his recent name-calling against Democrats and members of the news media.

“It’s fair to say that this is a look forward,” one official told reporters.

Aides said Trump is looking to tell the story of “real Americans” who have been affected by both the accomplishments of his first 38 days on the job and who would benefit from his proposals. The invitees highlighted the prominence of the president’s anti-illegal immigration message is likely to take in his remarks.

Asked by reporters how he hopes the speech will be received, Spicer echoed his boss’ focus on symbolism Monday, “I hope a very robust and applause-filled reception.” 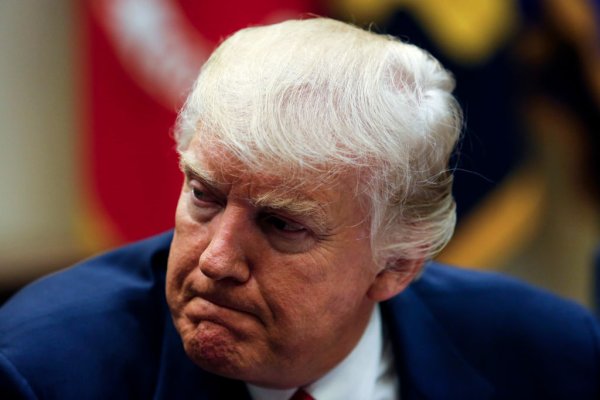 Here’s Who President Trump Is Bringing to His Address to Congress
Next Up: Editor's Pick