(NEW YORK) — U.S. stocks ended slightly higher on Monday and the Dow closed at a record high for a 12th straight session, as President Donald Trump said he would make a “big” infrastructure statement on Tuesday.

The Dow‘s streak of record-high closes matches a 12-day run in 1987, with Boeing and UnitedHealth among the biggest boosts for the Dow on Monday. The S&P 500 also closed at a record high. Energy gave the biggest boost to the S&P 500, with the energy index up 0.9 percent.

Trump, who met with state governors at the White House, also said he is seeking what he called a “historic” increase in military spending of more than 9 percent, while he said his administration would be “moving quickly” on regulatory reforms.

The comments came ahead of Trump’s first address to a joint session of Congress Tuesday evening. Investors are looking for more specifics on Trump’s plans, given the hefty gains in the market since the Nov. 8 election.

“Things are moving along in terms of the Trump agenda, but we’ll get a clearer picture after tomorrow night so that might precipitate some buying or selling,” said Bucky Hellwig, senior vice president at BB&T Wealth Management in Birmingham, Alabama.

Hellwig and others said there’s potentially more upside than downside from the address, given how the market has reacted in recent weeks.

Shares of U.S. defense companies – Boeing, Raytheon , General Dynamics and Lockheed Martin – rose after Trump said he would seek to boost Pentagon spending by $54 billion in his first budget proposal.

Boeing was up 1.1 percent while UnitedHealth was up 1.4 percent.

In its 1987 12-day streak of record-high closes, the Dow rose 9.2 percent compared with just a 3.9 percent gain in the recent record run.

Time Warner ended up 0.9 percent after news that the head of the U.S. Federal Communications Commission does not expect to review AT&T Inc’s planned $85.4 billion acquisition of Time Warner.

Advancing issues outnumbered declining ones on the NYSE by a 1.55-to-1 ratio; on Nasdaq, a 1.87-to-1 ratio favored advancers. 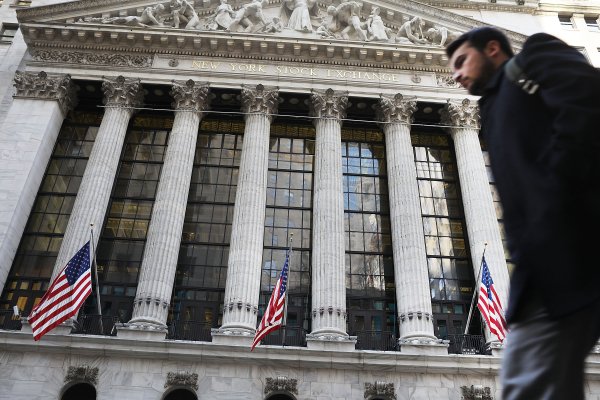