President Trump faces the biggest test yet of his young Administration as he prepares to deliver his first joint address to Congress Tuesday evening. It comes as Trump’s legislative agenda is still taking shape on the other side of Pennsylvania Avenue. The White House has largely delegated the nuts-and-bolts of legislating to Speaker of the House Paul Ryan, and to a lesser extent Senate Majority Leader Mitch McConnell. First up, they must repeal-and-replace Obamacare, then they must pass a tax reform plan, all while keeping the government open and funded. None of those policies are fully thought out yet, nor have the requisite buy-in from Republicans on Capitol Hill or the man sitting in the Oval Office. But Trump and the GOP have to do something—and quick. They know they have a once-in-a-generation opportunity with unified control of government, but at the same time are hobbled by eight years of rhetoric and unrealistic positions staked out as the opposition party. Governing is harder.

Trump will use his address Tuesday to continue to try to circumvent the media and to speak directly to his supporters. But unlike a campaign rally, it’s an opportunity to also speak to those who didn’t support him. It’s unclear just how much the president will take that up. White House aides expect him to lay out a broad vision of what he looks to accomplish over his term, including the above policy items, as well as more popular provisions like infrastructure spending. He will also focus heavily on national security and nationalism. Meanwhile, the White House is reviewing the Pentagon’s review of the nation’s counter-ISIS strategy, with it expected to presented to Trump later this week.

What Trump has to do to begin solving the opioid crisis. Trump’s budget calls for cuts to the EPA and a big boost to the Pentagon. And the governors meet with the President to make their case on Obamacare.

The DNC Isn’t Enough: Democrats Demand More Leadership Changes
Now that the party has a new chairman, restless activists are turning their focus toward the Capitol Hill leadership team. [Politico]

“I consider the media to be indispensable to democracy. We needed the media to hold people like me to account. Power can be very addictive and it can be corrosive, and it’s important for the media to call to account people who abuse their power.” — Former President George W. Bush Monday to NBC’s Today Show. He continued, “It’s kind of hard to tell others to have an independent free press when we’re not willing to have one ourselves.”

“Nobody knew that health care could be so complicated.” — President Trump to governors Monday morning

The World’s Most Important Workout [Politico]

George W. Bush opens up on Trump’s war with the media, Russia and travel ban [NBC] 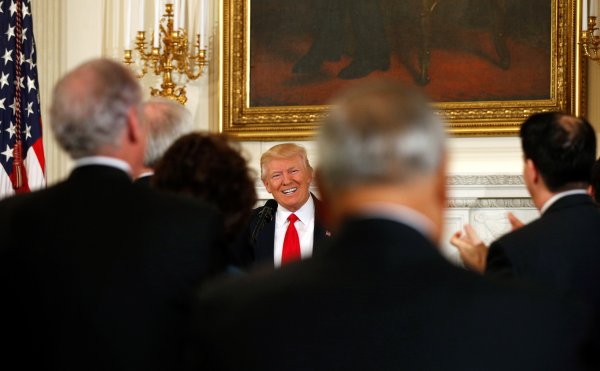 Trump: 'Nobody Knew Health Care Was Complicated'
Next Up: Editor's Pick