Grandmother Is Deported From U.K. Despite Being Married to British Citizen for 27 Years

A grandmother, who has been married to a British man for 27-years, was deported to Singapore on Sunday by U.K. authorities.

Irene Clennell, 53, says she was deported without money or a chance to pack her bags. “They just came to get me this morning and said they’ve already given me a chance. Now I’m on the plane. Four people are taking me to Singapore” she told Buzzfeed from a runway in Edinburgh, Scotland. “I don’t have a wallet with me, I’ve got about £12 in my pocket. I don’t even have my clothes, they’re at home. I just have what they took from the detention centre.”

Clennell was given permanent residency status, known as indefinite leave to remain, in the U.K. after marrying her partner John in 1990s. The pair moved from London to northern England where they had two children together, and now, a grandchild.

She is thought to have lost her visa status due to the amount of time she had spent out of the country caring for her dying parents, the Guardian reports. She made numerous attempts to reapply for permission to remain with her husband in the U.K., but was sent to a detention centre in January following a routine appointment with the immigration service in Jan.

Her sister-in-law Angela has started a Go Fund Me Campaign to help raise money for her legal fees. It has received more than $36,000 since news of her deportation broke. “Her husband John — my brother — is seriously ill and Irene is his sole caretaker. Without her to look after him, we’re all worried for him, and to rip apart a family after 30 years of happiness seems so unfair” a statement says on the page.

The spousal visa system in the U.K. requires the British partner to prove earnings that are over $23,000; the couple also need to show that they have lived for long stretches of uninterrupted time in the U.K. The British Supreme Court upheld the $23,000 minimum income rule last week, a ruling that has been criticized by rights’ groups as splitting families apart. 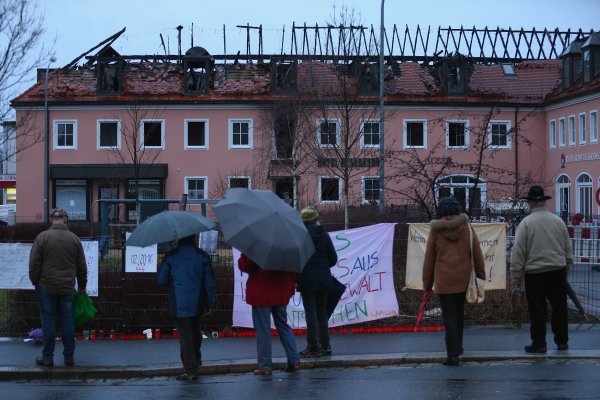 10 Migrants Were Attacked Every Day in Germany in 2016
Next Up: Editor's Pick