A Wrong Winner Was Also Announced at the Oscars in 1964. Here’s What Happened

It’s hard to imagine a more awkward moment than when it was revealed that Faye Duanway and Warren Beatty had read out the wrong name when announcing the winner for Best Picture at this year’s Oscars. But this is not the first time the Academy Awards have seen an envelope mixup.

In 1964, entertainer Sammy Davis Jr. was handed the wrong envelope when presenting the Oscar for Best Music Score (adaptation or treatment) during the 36th Academy Awards. Instead of announcing that the Oscar was awarded to Andre Previn for Irma La Douce, Davis Jr. said it was for John Addison for Tom Jones.

However, as the nominees for the category were Irma La Douce, Bye Bye Birdie, A New Kind of Love, Sundays and Cybele and The Sword in the Stone — with Tom Jones not on the list at all — the mistake was quickly rectified.

“Oh I am… they gave me the wrong envelope,” Davis Jr. told the crowd upon realizing the error. “Wait till the NAACP hears about this,” he joked. When he was handed the correct envelope, the entertainer put on a pair of reading glasses. “I ain’t gonna make no mistake this time, baby,” he said. Watch the clip above. 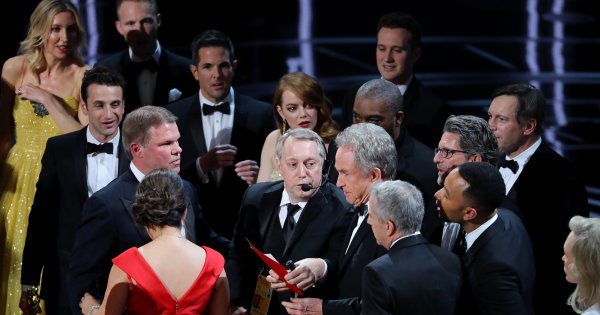 Everything We Know About the Oscars Best Picture Mistake and How It Happened
Next Up: Editor's Pick