Rachel Dolezal Is Flat Broke, But Unapologetic About Identifying as Black

Rachel Dolezal at her home in Spokane, Wash., on March 2, 2015.
Colin Mulvany—AP
By Zamira Rahim

Rachel Dolezal, the former civil rights activist whose claim to be black caused outcry in 2015, has said she is living in penury and facing the prospect of losing her home in a new interview.

Yet Dolezal, who was a N.A.A.C.P. branch president when it was discovered she had been born to white parents, said in the interview with the Guardian that she will not “apologise and grovel” for her actions. She generated global headlines after questions from a local reporter led to her parents releasing childhood photos of her and denouncing her as a fraud.

Today, she continues to identify as black and denies doing anything wrong. “I don’t think you can do something wrong with your identity if you’re living in your authenticity,” Dolezal said. “I’m not going to stoop and apologize and grovel and feel bad about it.”

She has written a memoir about her experiences, which will be released next month after having been turned down by around 30 publishing houses. In the midst of the race scandal, the activist resigned her position at the N.A.A.C.P. and was fired from a teaching position at Eastern Washington University.

Dolezal said she wrote the memoir to “set the record straight” and to “open up this dialogue about race and identity”. 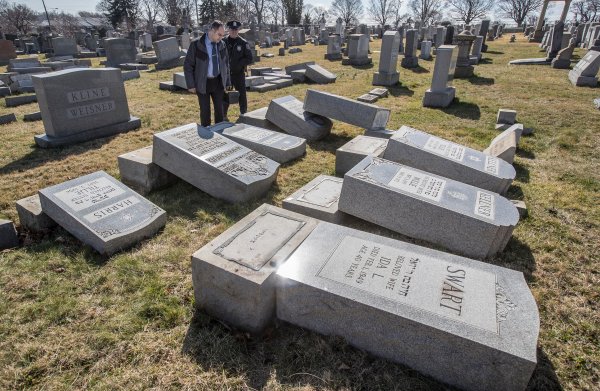 A Jewish Cemetery in Philadelphia Has Been Vandalized
Next Up: Editor's Pick