Review: A Lively Oscars Show Ended With the Mother of All Mix-Ups

The Oscars ended with one of the biggest shocks in their history: Moonlight having been declared Best Picture only after the producers of La La Land accepted their statues for that prize. Presenters Warren Beatty and Faye Dunaway biffed the presentation of the Oscar, with Beatty claiming only after team La La Land removed themselves from the stage that the envelope had been mis-stuffed with Emma Stone’s name. (As it turned out, they had been handed the “Actress in a Leading Role” envelope by mistake.)

It was an eventuality that Oscar superfans had speculated about through the years—what would happen if the wrong name was read?—but never actually seen, and it was, to be frank, hideously uncomfortable. It was only through Moonlight director Barry Jenkins’s graciousness in representing the film’s win not as an us-vs.-them triumph but as a moment of sharing joy at the oddity and possibility of life that anyone could really live it down.

This was the culmination of what had begun unpromisingly but become one of the best Oscars ceremonies in recent memory. After all, this was the biggest entertainment event yet during a time when every such event bears the burden of deciding if, to what degree, and how specifically to grapple with a political phenomenon that many around the world fear. Opening with Justin Timberlake’s performance felt like too much, or not enough. And yet the show followed the performance’s trajectory—not of mindless celebration but of freewheeling openness. The speakers, both those who won awards and those who presented awards, had messages to impart and did so with élan. Simple production choices seemed to introduce a tone of big-heartedness to the proceedings, as with the pairing of certain stars with the stars they admired from past generations: Seth Rogen spoke on behalf of Michael J. Fox, Charlize Theron for a spry and witty Shirley MacLaine. (The most welcome addition to the stage may have been hidden-no-longer figure Katherine Johnson, the NASA mathematician played onscreen by Taraji P. Henson.) And a segment about international cinema fans made an elegant case for movies—from Young Frankenstein to, yes, Oscar-winning film Suicide Squad—as a great American export and uniting force.

Obviously, the movie that most explicitly shouted out the power of cinema lost, in a result that would have been a genuine surprise had it been announced properly and was an outright shock as it played out. But that disconcerting result came only after a set of winners who finally ditched the same-old surprise act. Whatever message is delivered every year insisting that winners eschew the same-old laundry list of credits read off a sheet of computer paper finally stuck. Kevin O’Connell, the sound engineer who won for the first time on his 21st nomination, delivered a heartfelt and real tribute to his late mother. Moonlight co-writer Tarell Alvin McCraney shouted out “black and brown boys and non-gender-conforming,” as well as his own mother, represented in his film’s story of gradual redemption. And Iranian astronaut Anousheh Ansari, speaking on behalf of Best Foreign Language Film winner Asghar Farhadi, sounded a message about Farhadi’s absence, decrying “the inhumane law” that had kept the Iranian auteur at home and declaring “dividing the world into the us and our enemies categories creates fear.” It was crystalline and thought-through.

This is why the moment was salvaged—even despite its pulse-pounding oddity. The Oscars were a celebration of the best movies have to offer: not the campy recitation of what movies can do that would never live up to the real thing, but an open-hearted and unabashedly emotive evening. Why not celebrate one more twist, and do so with Jenkins’s spirit that it was not worth taking anything away from the other film? To be clear: This was an epic screw-up on the part of someone, embarrassing the La La Land producers and making something different than it might have otherwise been out of Moonlight‘s moment. But Jenkins’s spirit of conciliation was in keeping with the evening’s better nature.

To dispense with what did not work: It was unfortunate that the evening’s host didn’t seem to share the evening’s general embrace of humanity, but, well, one can’t have everything. Jimmy Kimmel seemed to borrow with a heavy hand from other recent awards ceremonies—a monologue joke about Amazon CEO Jeff Bezos hitting similar beats as Jimmy Fallon’s Golden Globes (no role model), as did a joke about winners for O.J. Simpson projects not thanking Simpson himself. Parachuted-in sweets (over and over, blunting whatever was the initial impact) were the de rigeur callback to Ellen DeGeneres’s Oscar pizza. What original beats he managed tended towards a dull, obvious contempt. He referenced only one acting or directing nominee, Mel Gibson, before launching into a bit about his supposed nemesis Matt Damon, a bit from Jimmy Kimmel Live that might have packed more punch were it not taking up time that might have gone to something the show’s broad audience had come here to see.

There’s willingness to deflate the big egos of Hollywood and then there’s repeated insistence that the movies and people being celebrated are pointless. Kimmel insisted that no one had seen various nominated movies (Elle, Moonlight) and, oddly, that no one has any idea what movies, really, even are. An ugly bit in which members of a Hollywood tour entered the auditorium to gawk and be gawked made this literal, but the attitude suffused Kimmel’s time onstage. “What is production design, by the way?” Kimmel ad-libbed as he took the stage after the Production Design Oscar was awarded.

The faux-naif act was tiresome in part because there seemed quite so much else being said, eloquently and well, from the Oscar stage. Moonlight actor Mahershala Ali closed a moving speech for Best Supporting Actor with a tribute to his newborn; Kimmel asked him what the child’s name was. He seemed unprepared for Ali to respond. (Kimmel rebounded to continue his obsession with Ali’s name and, later, to mock the name of an Asian-American member of the star tour.) Kimmel’s most notable nod to politics was a needling bit in which he tweeted at the President; given that he’d made a point in his monologue of not just avoiding politics but saying he wasn’t the man to deal with politics, this just seemed like dull-minded provocation, a reach for a headline that posed no risk of straining anyone.

But his part in the ceremony won’t be remembered in the way recent Oscar victims, from Anne Hathaway and James Franco to Seth MacFarlane, will be, because—and this is crucial—the ceremony was besotted not with movies but with what movies can do. In the spirit of the evening, it’s less interesting to critique Kimmel any further than to celebrate the bright, spirited winners. It’s fruitless to pick apart someone basically uninterested in film or its audience when Best Supporting Actress winner Viola Davis, sounding a clarion call for film’s power to illuminate lives less frequently celebrated on film, is so much more memorable—or when a director’s work, in the rare instance of surprise feeling heartening, odd, and awake to possibility, is celebrated at the very last moment. 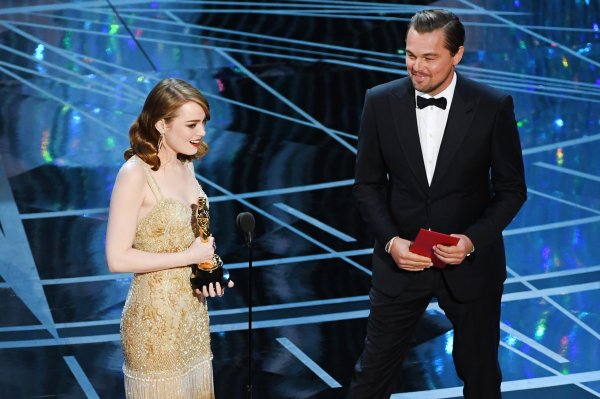