In an Oscars gag reminiscent of Ellen DeGeneres‘ 2014 pizza takeout bit, Jimmy Kimmel unloaded a sightseeing bus full of unsuspecting tourists into the Dolby Theatre Sunday night, thrusting them without warning in front of everyone who’s anyone in Hollywood and millions of viewers at home. At the front of the pack was Chicagoan Gary Alan Cole—and Gary was ready for the spotlight.

Wearing a Hollywood sweatshirt and black baseball cap, Gary introduced himself to Kimmel and quickly pulled out his phone to start snapping pics of the front-row celebs. He was joined, we soon learned, by his fiancée Vickie, who could hardly contain her excitement at breathing the same air as her all-time favorite actor Denzel Washington; Washington gamely performed a brief, impromptu wedding ceremony for the pair.

As Gary, Vickie and the rest of the crew rubbed Mahershala Ali’s Oscar and kissed the hands of nominees Nicole Kidman and Octavia Spencer, Kimmel noted to Gary, “I feel like you’re ignoring the white celebrities.” To which Gary matter-of-factly responded, “Yes, I am.”

The bit had a few critics—particularly after Kimmel made fun of one of the tourist’s names for being unfamiliar and difficult for him to pronounce. But Gary, who was hardly at fault for the segment’s existence, was quickly embraced. In the grand tradition of memes, which have granted the likes of Ken Bone instant celebrity, the Internet began fawning over Gary from Chicago almost immediately.

Some applauded him for soaking up the moment, as one must:

Others enjoyed his frankness under pressure:

And still others predicted a scramble to tell Gary’s life story in a moving profile:

Some hoped, on Gary’s behalf, that he had charged his phone the night before:

And some, thanks to him, have this year’s Halloween costume all planned out:

Vickie got some attention, too—particularly from those wondering just what Ryan Gosling might have whispered softly in her ear: 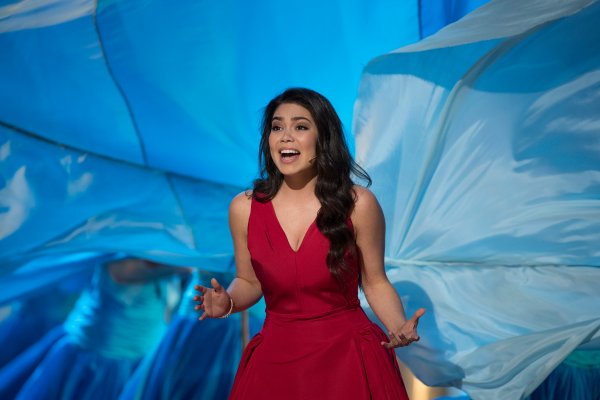 Moana's Auli'i Cravalho Got Hit By a Wave During Her Oscars Performance
Next Up: Editor's Pick