Thank you, colleagues and friends.

And thank you to my daughters Hannah and Sophie for putting up with all that my job has required over many years. And I am so happy that my son-in-law Brian Hanley, a good guy, has joined our family.

To Olga, there is much to say, but now I will say only that I relied on your professional guidance for many years, and your analytic judgment helped me make some crucial calls early on. You know what you did, and for that, and much else, my thanks.

And to our 15-month old granddaughter Ava, in her terms, “Hi!”

My 40 years in the Foreign Service – and the careers of many of my friends – became associated with the fall of the Soviet Empire and the putting in order of what came after: the building of a Europe whole, free and at peace. It is hard to recall today how improbable victory in the Cold War appeared. For two generations, up through the mid-1980s, many thought we were losing the Cold War. Even in early 1989, few believed that Poland’s Solidarity movement could win, that the Iron Curtain would come down, that the Baltic states could be free, that the second of the 20th Century’s great evils – Communism – could be vanquished without war. But it happened, and the West’s great institutions – NATO and the EU – grew to embrace 100 million liberated Europeans. It was my honor to have done what I could to help. I learned never to underestimate the possibility of change, that values have power, and that time and patience can pay off, especially if you’re serious about your objectives. Nothing can be taken for granted, and this great achievement is now under assault by Russia, but what we did in my time is no less honorable. It is for the present generation to defend and, when the time comes again, extend freedom in Europe.

America put its back into this rebirth of freedom in the West, not because we sought to “impose” ourselves on unwilling nations, but because captive nations sought our aid, and we saw that our interests would advance along with our values. This was no new insight, but merely the expression in my time of what I will call America’s Grand Strategy.

From our emergence as a world power at the end of the 19th Century, the U.S. opposed spheres of influence and the closed European empires of the time. Instead, we favored an open world, ordered by rules, in which the values of our Republic and our business interests could simultaneously succeed. In our abundant self-confidence, we assumed that our Yankee ingenuity would prevail in a fair playing field and that our values would naturally follow. We would fashion the world in our own, democratic, image and get rich in the process: a vision breathtaking in its ambition. Yet our positive-sum world view, exceptional among the great powers, allowed room for others to prosper alongside the United States. In fact, the genius of the American system is that our success depended on the prosperity and security of other nations. We would lead in concert with the other great democracies of the world. George Kennan didn’t think much of what he termed America’s moralistic-legalistic tradition. But this foreign policy exceptionalism was the heart of our Grand Strategy through two World Wars, the Cold War and the post-1989 era, and it was crowned with success. Our mistakes, blunders, flaws, and shortcomings notwithstanding, the world America made after1945 and 1989 has enjoyed the longest period of general peace in the West since Roman times, and decades of prosperity.

This track record suggests that an open, rules-based world, with a united West at its core, is an asset and great achievement, and a foundation for more. Yet, some argue that this is actually a liability, that values are a luxury, that in a Hobbesian or Darwinian world we should simply take our share, the largest possible. Consider the consequences of such arguments. By abandoning our American Grand Strategy, we would diminish to being just another zero-sum great power. Spheres of influence – admired by those who don’t have to suffer the consequences — would mean our acquiescence when great powers – starting with Russia and China – dominated their neighbors through force and fear, while creating closed economic empires. Were we to recognize this, we would abandon our American sense of the potential for progress in the world; we would abandon our generations-old support for human rights, turning our backs on those who still turn to American in hope. And of course we would have to accept permanent commercial disadvantage. America would essentially retreat from whole areas of East Asia, Central Asia, and Eastern Europe. More retreat would follow as other emerging great powers carved out their own spheres, small and large.

Some so-called realists might accept such a world as making the best of a harsh world, but it is not realistic to expect that it would be peaceful or stable. Rather the reverse: a sphere of influence system would lead to cycles of rebellion and repression and, if the past 1000 years is any guide, lead to war between the great powers, because no power would be satisfied with its sphere. They never are. In 1940, Germany offered Britain a sphere of influence deal: German recognition of the British Empire in exchange for London’s recognition of Germany dominance of continental Europe. Churchill didn’t take the deal then; we should not take similar deals now.

America’s Grand Strategy did not come from nowhere: it followed from our deeper conception of ourselves and our American identity. Who are we Americans? What is our nation?

We are not an ethno-state, with identity rooted in shared blood. The option of a White Man’s Republic ended at Appomattox. On the contrary, we are “a new nation, conceived in liberty and dedicated to the proposition that all men are created equal.” We say this more often than we consider its significance. Our nation is based on an idea that, when embraced, makes us Americans. We fought a Civil War over whether that sentence – that all men are created equal – was meant literally.

Don’t take my word for it. Consider Abraham Lincoln’s speech given just after July 4, 1858. Lincoln observes that in celebrating the 4th of July, descendants of the generation of 1776 feel proud, as they should. But he goes on:

“We have besides these men—descended by blood from our ancestors – among us perhaps half our people who are not descendants at all of these men, they are men who have come from Europe…and settled here, finding themselves our equals in all things. If they look back through this history to trace their connection with those days by blood, they find they have none, they cannot carry themselves back into that glorious epoch and make themselves feel that they are part of us, but when they look through that old Declaration of Independence they find that those old men say that ‘We hold these truths to be self-evident, that all men are created equal,’ and then they feel that that moral sentiment taught in that day evidences their relation to those men, that it is the father of all moral principle in them, and that they have a right to claim it as though they were blood of the blood, and flesh of the flesh of the men who wrote that Declaration, and so they are.”

And so we are, all Americans. We opened our country to the stranger, from all lands on Earth, with the door to American identity the principle of that old Declaration, “All men are created equal.” We feel that sense of American identity to this very day. And that rough sense of equality and opportunity, embedded in us, informed the way that we brought our American power to the world, America’s Grand Strategy. We have, imperfectly, and despite detours and retreat along the way, sought to realize a better world for ourselves and for others, for we understood that our prosperity and our values at home depend on that prosperity and those values being secure as far as possible in a sometimes dark world. And we have done well.

My time in the Foreign Service is ending. I am grateful for the opportunity it has given me to witness history and, sometimes, to try to bend history’s arc.

For those of you remaining in government service, I say this: serve your nation and this Administration as you serve all Administrations: with loyalty, dedication and courage. Help Secretary TIllerson. He deserves it. And he needs it. And help the President as well, putting your backs in it.

And as you serve, you will, as I did, always remember your oath to the Constitution, and to that principle behind the Constitution: our nation is dedicated to the proposition that all men are created equal.

Have faith in our nation, in our Constitution and in that proposition. Have faith in yourselves, thus inspired, and in each other.

And therefore, as Lincoln said, “LET US HAVE FAITH THAT RIGHT MAKES MIGHT, AND IN THAT FAITH, LET US, TO THE END, DARE TO DO OUR DUTY AS WE UNDERSTAND IT.” 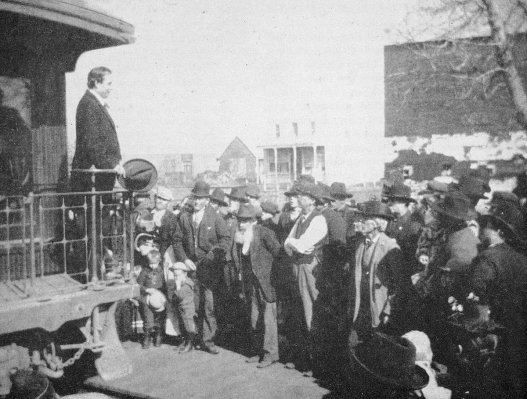 The Man Steve Bannon Compared to President Trump, as Described in 1925
Next Up: Editor's Pick