Frank Luntz: Americans Trust Their Own States But Not Washington

A protester holds a US flag as she shouts slogans against President Donald Trump during a solidarity rally for the general strike at the Washington Square Park in New York on February 17, 2017. / AFP / Jewel SAMAD (Photo credit should read JEWEL SAMAD/AFP/Getty Images)
JEWEL SAMAD—AFP/Getty Images
Ideas
By Frank Luntz
Luntz is a pollster and communication advisor. He is conducting focus groups for HBO and Vice News ahead of the 2018 elections.

If there is one thing Democrats, Independents and Republicans agree on — and there is, in fact, only one thing — it’s that it’s time for a new relationship between the citizenry and their government. That philosophy is borne from resentment and a sense of betrayal, but it binds us together at a time when everything else in our collective lives are tearing us apart.

Skepticism and cynicism abounds from Atlantic to Pacific, from farm to factory, within urban centers and across suburban sprawl. Americans of all affiliations carry frustration, anger, and Mutually Assured Distrust (“MAD”) wherever they go, whenever they talk politics. Distrust is as omnipresent as the Kardashians. Americans are MAD as hell, but what matters more is that they’re not going to take it anymore.

Everyone still wants Change, but almost no one believes in Hope anymore. If we are to restore that enduring confidence that America’s best days are still ahead, we’ll need to find our strength somewhere far outside of Washington, because faith and trust in our federal government, bedrock to our democracy, is sorely lacking.

The American people are asking for – in fact, demanding – a “New Relationship” with their government at all levels. Our nationwide public opinion research at the National Governors Association last month offers a clear path forward. But this path does not lead to Washington D.C., but from it, to the 50 State Capitols.

Despite the difficult but consequential election, Americans are still not optimistic that a broken Washington will be fixed any time soon. My focus groups for CBS and Fox News are just as toxic today as they were six months ago. President Trump leads a deeply divided nation, and an abiding dislike for Congress and the Washington bureaucracy is among the few things that unites us. Americans are looking elsewhere for “real results and real solutions, for real people.” They are looking for their states, and especially their governors, to stand and deliver.

The data is clear and conclusive. For example, we asked “Overall, which level of government do you believe is doing a better job of serving its citizens and delivering results?” Fully 71% of voters chose “State Governments,” while just 29% chose “The Federal Government.” On this, America has achieved rare bipartisan agreement. By party, the spread is 82% state government to 18% federal government among Republicans (+64), 54% to 46% among Democrats (+8), and 77% to 23% among Independents (+54). And with Trump upsetting the Left every day, it’s likely that even more Democrats will choose the state government option in the months to follow.

We then asked Americans to consider government programs like healthcare, Medicaid, education and rebuilding our roads and infrastructure. “What is the best balance of control in terms of setting the rules and regulations and administering the programs?” Just under one-third (31%) want the federal government to be in control, while more than two-thirds of the country either want genuine federal-state power sharing (35%) or the states to hold the power advantage (35%). Republicans are overwhelmingly in the state government camp, but Independents and Democrats aren’t far behind.

It’s not just about the issues. It’s also about the people. Nearly half of Americans (45%) regard “America’s governors and state governments” favorably, while only 30% have a negative impression. By comparison, just 29% of the country has a favorable impression of Congress, while a majority (51%) hold a negative view. The federal government does even worse: 27% favorable, 56% unfavorable. I’d provide the partisan results, but they’re consistent across parties: everyone has a net favorable opinion of governors, and everyone dislikes Congress and the federal government – regardless of who’s in charge.

Voters of all stripes simply trust their governors far more than they trust their leaders in Washington. The number one reason among Democrats and Republicans alike: “State leaders are more responsive because they are closer to their constituents.” In a time when trust is scarce and with Americans demanding real progress right now, state governments and governors represent the best hope to win back to confidence of the voters and get the job done.

This isn’t an academic exercise or an ideological appeal for “federalism.” (Note to reader: Federalism is about taking power away from Washington. Many Americans think exactly the opposite.) It’s not about smaller or more limited government. Almost no one I interview cares about the size of government as much as the efficiency, effectiveness and accountability of government. Americans want to empower states and governors to take a more active role in that governance because they’ve given up on Washington – Trump or no Trump.

Support for greater state control isn’t about politics or partisanship. It’s about performance. In recent years, many states have made meaningful and measurable progress, while Washington stoked gridlock with meaningless and maddening false promises. Americans simply have greater favorability towards their governor (net +16% positive) and America’s governors and state governments (net +15%) and a more negative reaction towards the “federal government” (net -29%) and “Congress” (net -22%). Similarly, an overwhelming majority of voters (71%) believe their state is doing a better job of “serving its citizens and delivering results,” more than twice as many as the 29% who chose the federal government. And here’s the encouraging part: Democrats, Republicans and Independents all agree.

On most policy issues and personal attributes, voters trust states and governors more than they trust Congress and the federal government. The NGA survey identified ten specific areas where Americans trust state governments more than the federal government. Of all of the issues and attributes, none are more important than “has the most dedicated public servants who are in it for the right reasons.” Here, state governments hold an overwhelming 30 percent lead.

The American people want their elected officials to fight for them rather than fight each other. They want cooperation, not confrontation. Message to Capitol Hill: even ordinary Republicans who have felt left out of national politics for the past eight years prefer compromise over uncompromising, unyielding principle by a margin of 58% to 42%.

Americans are demanding a new relationship with their government that prioritizes local leadership and local solutions rather than an inflexible one-size-fits all national approach to the myriad challenges facing the country.

A relationship that limits mandates and decision-making by unelected bureaucrats in Washington and prioritizes state and local engagement and input.

A relationship where their state and local leaders not just listen but truly “hear” their constituents, because they often know them and actually understand them.

A relationship that puts to an end the frustratingly failed practice of career politicians fighting so hard for votes on Election Day, only to return to Washington and dismiss the voices of those who cast them. Whether Democratic or Republican, old or young, Rust Belt or Sun Belt, Americans want to be represented by local leaders who say what they mean, mean what they say, and are willing to supplant the status quo in favor of a better future.

There’s a clear message here, if the politicians are willing to hear it. The New Relationship is not about shifting dollars or responsibilities between or across congressional committees or federal agencies. It’s about the complete restructure of government from the bottom up and the top down. It’s about giving states the responsibilities most of us believe they deserve. Americans are looking to the governors to be their voice. They want to be heard, yes. But more importantly, they want their Governors to lead.

There are notable exceptions, but for the most part, the American people believe their governors are succeeding. They aren’t holding their breath about Washington.

AREAS WHERE STATE GOVERNMENT IS MORE TRUSTED THAN THE FEDERAL GOVERNMENT

— “Has the most dedicated public servants who are in it for the right reasons:” (States +30%)

— “Listening to, representing and being accountable to us, the voters:” (States +14%)

— “Delivering welfare programs for those who need it, while curbing waste and abuse:” (States +10%)

— “Creating new solutions that are more innovative and more focused on the future. (States +4%) 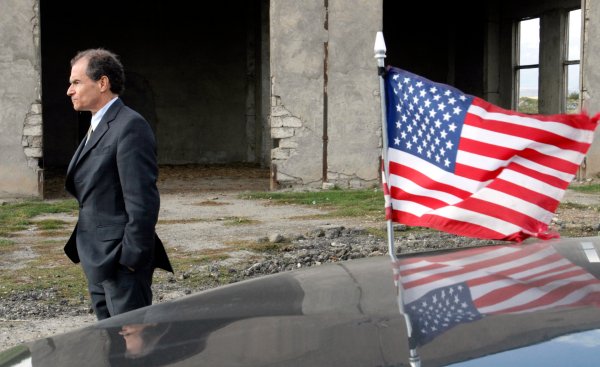