Mardi Gras has been synonymous with New Orleans for well over a century: this year’s celebration, on Tuesday, marks the 160th anniversary of the city’s first parade. But Mardi Gras, sometimes referred to as Carnival (after the pre-Lenten festive season of the same name), has roots that can be traced back to Europe’s Middle Ages, far before the Big Easy was founded in 1718.

French-Canadian explorers brought the tradition to the States just before the turn of the 17th century. In 1699, led by Pierre Le Moyne d’Iberville, they made camp approximately 60 miles from present-day New Orleans and dubbed the site “Point du Mardi Gras” since that day, March 3, marked the celebration of Mardi Gras in Paris.

New Orleans wouldn’t exist for another 19 years, however, and it’s widely believed the first New World iteration of Carnival occurred in a different territory under French control — in Mobile, Ala., in 1703.

“Sometimes I jokingly say ‘[Mobile] had it first, but [New Orleans] told them where to put it,'” Arthur Hardy, Mardi Gras Guide author, told TIME. “The men who started the first Mardi Gras organization in New Orleans were from Mobile, and they actually borrowed [traditions from] Mobile’s Mardi Gras-style parade.”

The main difference, Hardy said, was that Mobile’s parades initially weren’t for Mardi Gras at all: they ran on New Year’s Eve.

In the 18th century, as the French further colonized North America and New Orleans evolved into a bustling port city with strong Catholic roots, Mardi Gras traditions — celebrations of Fat Tuesday, which marks the last opportunity for feasting and revelry before a period of Lenten fasting beginning the following day, Ash Wednesday — spread throughout the region. Different cities had their own celebrations. In New Orleans, elaborate galas were held, to which attendees wore masks that allowed them to shed strict societal expectations. Spanish rule in the latter half of the 1700s and Louisiana’s subsequent purchase in 1802 by the newly-formed United States saw temporary bans of the festivities, but pleas from New Orleans residents led to the galas’ reinstatement in 1823.

But the most renowned tradition of Mardi Gras — the parades — didn’t begin until 1857.

That year, the aforementioned men from Mobile created the Comus Organization — the first “krewe,” a sort of non-profit secret society that orchestrates parades and galas for Mardi Gras. The members of Comus established the tradition of presenting themed float parades for the public; a tradition, Hardy said, that makes New Orleans’ version of Mardi Gras so vast and beloved.

“[The parade] is like a six-mile family picnic,” he explained. “Anybody can go, and it’s a remarkably safe and wholesome event. You don’t watch a Mardi Gras parade, you’re a part of it,” he said, referencing popular customs like bead-throwing that make Mardi Gras parades a participatory event. “There’s very few entertainment venues where they give you a free show and free gifts to take home with you after.”

With Comus’ introduction of public parades, the festivities of Mardi Gras were no longer limited to exclusive galas, and more krewes formed throughout New Orleans, putting forth their own themed processions. Famed mainstays like Rex and Proteus burst onto the scene in the late 1800s, and as the city transitioned into 20th century, newer, diverse krewes like the Zulus — a predominantly black organization — rose to prominence as well.

Today, Hardy estimates there are about 35 distinct parades throughout New Orleans proper, and 50 if the surrounding suburbs are accounted for. (None of them, however, run through the French Quarter. While the neighborhood and its famed Bourbon Street often draw attention for its partying antics and nudity, New Orleans has prohibited floats from rolling down the area’s narrow streets due to fear of fire.) Mardi Gras parades have only been cancelled 13 times in the 160-year history of the tradition, mostly due to the Civil, World and Korean Wars. In 2006, the lingering effects of Hurricane Katrina threatened to do the same, but officials decided to proceed with the annual celebration.

“People thought that there was no way the city would be able to embrace its culture and tradition after Katrina, but Mardi Gras proved to the country that [New Orleans] would come back,” Mark Romig, President of the New Orleans Tourism Marketing Corporation and PA announcer for the city’s NFL team, the New Orleans Saints, said to TIME.

And despite debate over gentrification in the wake of the city’s reconstruction process, Romig insists newcomers are always welcome.

“That’s the magic of Mardi Gras — it’s a gumbo,” he said, referencing the iconic Louisiana stew. “And they don’t water it down. They add richness.” 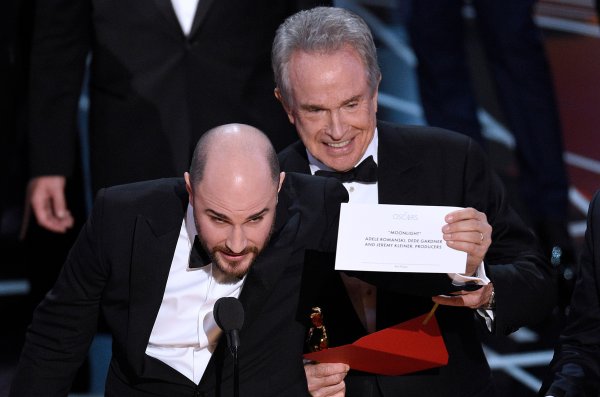 What It Feels Like to Suddenly Realize You Didn’t Actually Win That Oscar
Next Up: Editor's Pick