Merriam-Webster Trolls Kellyanne Conway by Posting the Definition of Feminism

Kellyanne Conway made headlines Thursday morning when she said it was difficult for her to call herself a feminist because she wasn’t “anti-male” or “pro-abortion,” and Merriam-Webster stepped in with the definition of “feminism” to correct Conway’s alternative fact.

“‘Feminism’ is defined as the ‘belief that men and women should have equal rights and opportunities,’” the dictionary tweeted Thursday morning.

Conway’s comments came at the Conservative Political Action Conference after she was asked to explain her link to a new movement of “conservative feminism.”

“It’s difficult for me to call myself a feminist in the classic sense because it seems to be very anti-male, and it certainly is very pro-abortion, in this context, and I’m neither anti-male or pro-abortion,” she said to applause. “There’s an individual feminism, if you will, that you make your own choices…I look at myself as a product of my choices, not a victim of my circumstances. That’s really, to me, what conservative feminism, if you will, is all about.”

Conway also condemned the recent Women’s Marches across the country and claimed the protests were sparked by the fact that many women have a problem with women in power.

“It turns out that a lot of women just have a problem with women in power,” she said. “This whole sisterhood, this ‘Let’s go march for women’s rights,’ just constantly talking about what women look like…or presuming that they’re not as powerful as the men around. This presumptive negativity about women in power, I think, is very unfortunate.”

This isn’t the first time Merriam-Webster has stepped in to correct Conway. In January, after her infamous assertion that President Donald Trump’s lies about his inauguration crowd size were “alternative facts,” Merriam-Webster tweeted the definition of “fact.”

The dictionary also got snarky with Sean Spicer last month after he accused then-acting Attorney General Sally Yates of committing an act of betrayal following her refusal to defend Trump’s immigration ban. When a reporter challenged Spicer on the definition of “betrayal,” he said, “I’m not going to define the word” — so the dictionary took it upon itself to do so with a post on their website. 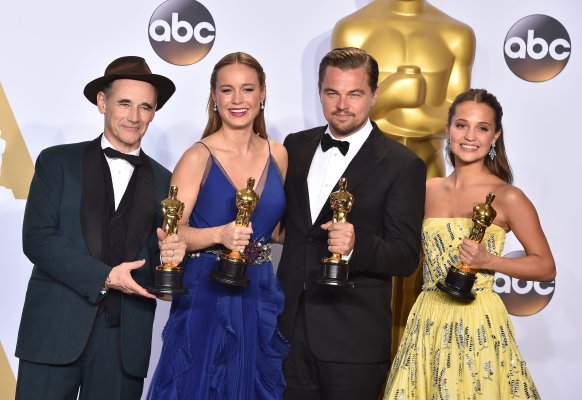 Oscar Nominees Will Receive a Vagina Fitness Tracker
Next Up: Editor's Pick