A Roundup of Every Political Moment at the 2017 Oscars

The Oscars are no stranger to politics, at least in the last 40 years. Ever since Marlon Brando sent activist Sacheen Littlefeather to accept his award for The Godfather with a speech about the film industry’s mistreatment of Native Americans, Hollywood’s honorees have used the stage to speak out about current events. Given the number of performers and filmmakers who have spoken out against the Trump administration and the number of nominated films with political themes, it was no surprise when speech after speech Sunday night spent as much time on “thank you’s” as they did on political and social commentary.

Here are all the moments when honorees and presenters spoke out:

Several stars made silent statements on the red carpet. Lin-Manuel Miranda, Ruth Negga, Karlie Kloss and others fastened blue ribbons to their red-carpet attire in support of the American Civil Liberties Union. Presenter Dakota Johnson carried a clutch that subtly featured the Planned Parenthood logo, which Emma Stone also wore on her dress. Best Documentary nominee Ava DuVernay wore a gown by Lebanese designer Ashi Studio to show solidarity with a majority Muslim country. Syrian refugee Hala Kamil, the subject of nominated short documentary Watani: My Homeland, wasn’t sure if she’d be able to attend the ceremony because of President Trump’s travel ban on countries including Syria. But designer Brandon Maxwell fashioned a last-minute gown for Kamil, which also met her standards of modest attire.

Jimmy Kimmel called out President Trump explicitly several times. Kimmel began his opening monologue by addressing the divisions in America and urging viewers to reach out to someone with whom they disagree to engage in open dialogue. He then thanked President Trump, joking, “Remember last year when it seemed like the Oscars were racist?” He also referenced Trump’s controversial travel ban when introducing Best Actress nominee Isabelle Huppert, who is French, quipping, “I’m glad Homeland Security let you in tonight.” Later in the evening, he asked CNN to leave the building, a reference to the exclusion of CNN and other news outlets from a press briefing earlier this week: “Fake tans we love, but fake news?”

Kimmel then roasted the “highly overrated” Meryl Streep. The host referenced President Trump’s post-Golden Globes Streep burn—when he tweeted that she was “overrated” after she indirectly called him out in a scathing speech—by asking her to stand for “a totally undeserved round of applause.” “Meryl Streep has phoned it in for more than 50 films over her lackluster career,” he joked.

One of Suicide Squad’s makeup and hairstyle winners sent a shout-out to immigrants like him. In his acceptance speech alongside Giorgio Gregorini and Christopher Nelson, Suicide Squad makeup artist Alessandro Bertolazzi, who hails from Italy, dedicated his award to “all the immigrants.” Though he didn’t call out the president, the remark was pretty clearly a response to Trump’s recent restrictions on travel to the U.S. from seven predominantly Muslim nations.

Academy President Cheryl Boone Isaacs addressed the #oscarssowhite controversy. Boone Isaacs said she was proud that the film industry is “becoming more inclusive and diverse with each passing day” and that she’s proud “to see all the new faces among this year’s nominees.” She continued, “Tonight is proof that art has no borders, art has no single language and art does not belong to a single faith.”

Anousheh Ansari read Asghar Farhadi’s powerful statement about the travel ban. Farhadi, who won his second Oscar for Best Foreign Film, for The Salesman, chose not to attend the ceremony in protest of the travel ban, which includes his home country of Iran. Ansari sent Anousheh Ansari, the first female space tourist, in his stead to read a prepared speech. “My absence is out of respect for people of my country and those of other six nations whom have been disrespected by the inhumane law that bans entry of immigrants to the U.S.,” Ansari read. Read the full statement here.

Gael García Bernal spoke out against a border wall. Introducing Best Animated Feature with Hailee Steinfeld, García Bernal addressed President Trump’s promised border wall between Mexico and the U.S.—and any other figurative wall that might divide us. “As a Mexican, as a Latin American, as a migrant worker, as a human being, I am against any form of wall that wants to separate us.”

Zootopia’s directors referenced tolerance. Accepting the award for Best Animated Feature, the filmmakers behind Zootopia made about as tepid a statement as possible about a movie that addresses racial profiling and harmful stereotypes. They thanked audiences for embracing “this story of tolerance being more powerful than fear of the other.”

The short documentary winners quoted the Quran. Orlando von Einsiedel and Joanna Natasegara, director and producer of The White Helmets, explained the mission of the Syrian Civil Defense by quoting the Quran: “to save one life is to save all of humanity.” Adding that the organization has saved 82,000 Syrian lives, they asked everyone in the audience to stand up to send a message of solidarity that the war in Syria must come to a swift conclusion.

MORE Review: A Lively Oscars Show Ended With the Mother of All Mix-Ups

Moonlight’s writers dedicated their Adapted Screenplay Oscar to “people out there who feel like there’s no mirror.” Barry Jenkins promised to be there, over the next four years (ahem, the length of a presidential term) for people who feel like their lives are not reflected. Tarell Alvin McCraney dedicated the award to boys, girls and gender nonconforming kids of color. 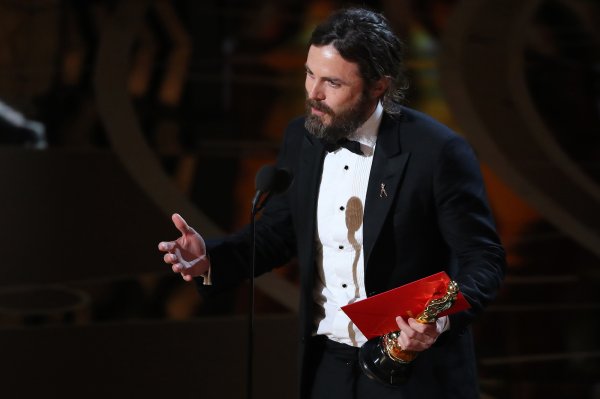