Gretchen Carlson: The Time Is Now for Women to Run for Office

I watch very few mini-series but lately I’ve been transfixed by The Crown on Netflix. Apart from the brilliant acting and the fascinating storyline of a young Queen Elizabeth, I’m sure it’s also subconsciously helping me deal with my Downton Abbey withdrawal.

In a recent episode, the Queen, still in her twenties, dresses down a much older, revered and respected Prime Minister Sir Winston Churchill for not notifying her when his health had deteriorated to the point of possibly being incapacitated.

Her script: You chose to withhold information from me … a decision that feels like a betrayal. Your breaking of that trust was irresponsible and might have had serious ramifications for the security of this country…. Is your health better now? I would ask you to consider your response in light of the respect that my rank and my office deserve. Not that which my age and gender might suggest.

It’s at this point the viewer truly understands the power of the throne and, more importantly, that Churchill realizes that the Queen is ready to rule.

And, it got me thinking.

Could it be that Great Britain’s monarchy, sometimes ridiculed and seen as politically impotent, has had a major impact on the way the British people have come to revere women in top positions? Having seen women in powerful roles, such as queens, are the British more likely to accept a woman in a top position like, say, Prime Minister?

They’ve had two: Margaret Thatcher and now Theresa May, which of course is better than we’ve done, with our zero.

A recent study out of New York University, the University of Illinois and Princeton University suggests that by the age of six, girls in this country across all socio-economic and racial lines become “less likely than boys to associate brilliance with their own gender and are more likely to avoid activities said to require brilliance.”

The research followed 400 children between the ages of five to seven within various studies. In one part, some of the children were told a story about a person who was “really, really smart” and then asked to guess whether that person was a man or a woman. Five-year-olds picked their own gender, but six- and seven-year-olds of both genders were more likely to pick men.

So what happens to change a girl’s world perception between the ages of five and seven? And how does that affect the career choices of young women? As one researcher involved in the study put it, “[T]hese new findings show that these stereotypes begin to impact girls’ choices at a heartbreakingly young age.”

Is that one of the reasons why we haven’t elected a female President?

Luckily, I had a mom who told me, from a young age, that I could be anything I wanted to be. She instilled in me a sense of confidence and belief that I’m passing along to my own kids. Who knows if simply being told to believe in yourself is enough to break through the stereotypes. In my case, it didn’t hurt, but it probably wasn’t the whole story.

That’s why I hope that in this incredibly divisive political environment, more women will choose to run for political office. Our time is now.

The past year proved that America desperately wanted an outsider to take center stage, but more importantly it proved that any of us can aspire to make the leap of faith and give it a try. While young women previously may have considered themselves unqualified for political office, the election of President Donald Trump, who had never held public office, counterintuitively took down some preconceived barriers to candidacy – for everyone. He did it and so can you.

It’s good to hear that some groups across the country are seeing a surge in young women planning to run for office. We need that.

Now is the time to seize the day — like Margaret Thatcher and Theresa May — by encouraging our girls to be anything they want to be, and to run for any political office, including the highest office in the land. Just like Queen Elizabeth who, as a young woman,demanded respect above and beyond what her gender and age traditionally may have warranted, we deserve the same respect some 70 years later. Let’s work together to see our own Madam President.

Gretchen Carlson is a former anchor on Fox News and an advocate for workplace equality and the empowerment of women. 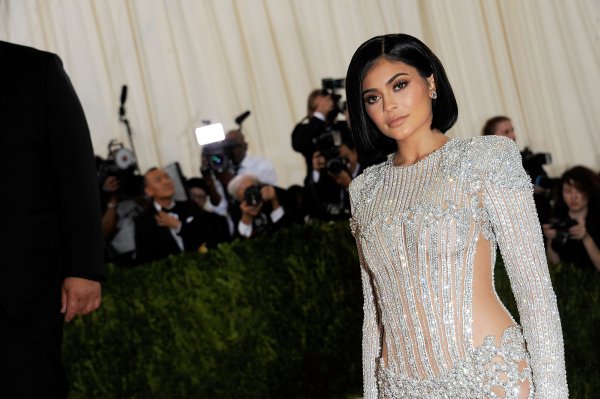 Kylie Jenner's Cosmetic Brand Is Launching a Highlighter
Next Up: Editor's Pick