In a Q&A at the Conservative Political Action Conference on Thursday, the highest ranking woman in President Donald Trump’s Administration was asked about conservative feminism and why she believes women belong in the Republican party.

“I believe this generation, particularly the younger generation, doesn’t really like labels,” Conway said. “It’s difficult for me to call myself a feminist in the classic sense — because it seems to be very anti-male and it certainly seems to be very pro-abortion. I’m neither anti-male or pro-abortion. There’s an individual feminism, if you will. You make your own choices. I look at myself as a product of my choices, not a victim of my circumstances. And to me, that’s what conservative feminism is all about.”

Conway, who was raised by a single mother, attributed her beliefs to her own upbringing. “I was raised to be a strong and independent woman without anybody saying the word feminist or having political conversation,” she said.

“My mother never felt sorry for herself,” Conway said. “She just figured it out. She didn’t complain…I believe those are timeless lessons and timeless opportunities for all women in similar circumstances and situations.”

Conway has made similar remarks before. In an interview with the Washington Post last month, Conway said that she considers herself “postfeminist” and again invoked the idea that she sees herself as a “product of her choices.” She also said that she didn’t see the point to the Women’s March on Washington, a large-scale, multi-purpose protest held in cities across the country and world the day after President Trump’s inauguration.

Conway, who served as Trump’s campaign manager, also spoke about how proud she was to help President Trump defeat Hillary Clinton, the first female presidential nominee of a major political party. “I will tell my three daughters, your daughters or you, that the job of first female president of the United States remains open, so go for it,” she said. 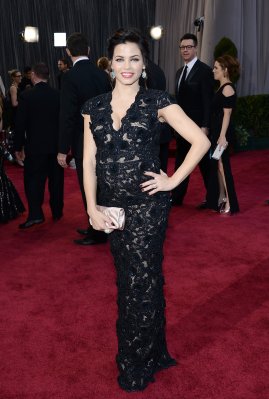 The Sweet Reason Jenna Dewan Tatum Is Saving Her Oscars Dress for Her Daughter
Next Up: Editor's Pick