He Was Freed from Guantánamo Bay and Paid $1.2 Million. This Week, He Died Fighting for ISIS

Jamal al-Harith aka Abu-Zakariya al-Britani, who changed his name from Ronald Fiddler after converting to Islam poses during a portrait session on July 4, 2011 in London,England.
Andy Hall—Getty Images
By Tara John

A former Guantánamo Bay detainee paid over $1 million in compensation by Britain’s government died fighting for ISIS in Iraq this week, raising a storm of controversy that has sucked in the U.K.’s security services, its government and former prime minister.

Jamal al-Harith, who died in a suicide bomb attack on Iraqi-led coalition forces on Monday, was one of around 16 former Guantánamo Bay detainees paid around $12.4 million by the U.K. government in 2010 after being released from the military prison.

Since the news of the Muslim convert’s death, there has been outrage in Britain over reports that he was awarded around $1.2 million before returning to jihadism, a claim that has been denied by his family. Hadith and other British detainees sued the government over complicity in their alleged ill treatment while in U.S. custody.

The $12.4 million out-of-court settlement was likely offered for fear national security secrets would be disclosed in a court case. “The issue was the legal disclosure rules, where if somebody brings a civil action for damages then they are entitled to disclosure of material, some of which may be national security material,” Lord Carlile, the former independent reviewer of terror legislation, told the BBC on Tuesday.

Lawmakers in each of Britain’s major parties traded criticisms over the 2010 settlement approved by the Conservative-led coalition government, and over Harith’s release in 2004 by the then Labour government. Security Minister Ben Wallace was grilled over the compensation payments in the House of Commons, while some lawmakers leveled criticism at former Prime Minister Tony Blair, who secured Harith’s release. Blair’s interior minister at the time, David Blunkett, said at the time Harith would no longer be a “threat to the security of the British people.”

Blair issued a statement on Wednesday saying he is being unfairly blamed over Harith’s return to jihadism, noting that there had been a broad consensus on his release, and that compensation had been agreed to by the Conservative-led coalition government in 2010, long after he had left power.

Blunkett, meanwhile, wrote in the Guardian that he had approved the 2004 release believing Harith and others would be “subject to surveillance and monitoring by the security services.” When Harith travelled to Syria ten years later, current Prime Minister Theresa May was the interior minister responsible for the monitoring of risks to national security.

ISIS claimed on Monday Abu Zakariya al-Britani, Harith’s nom de guerre with the group, was one of three suicide bombers who attacked coalition forces in a village close to Mosul, Iraq. The group released a picture of Harith, which was identified by his brother, smiling in the backseat of a truck filled with explosives.

Harith was born in the northern-city of Manchester in 1966 and was known as Ronald Fiddler before converting to Islam nearly 30 years ago. According to Department of Defense files released by Wikileaks, Harith was detained by the Taliban in Pakistan in 2001 on suspicion of being a Western spy. He was sent to Afghanistan then transferred to U.S. forces, who sent him to Guantánamo Bay in Feb. 2002 due to his “knowledge of prisoners and interrogation tactics.”

In September that year, Major General Michael E. Dunlavey recommended Harith’s release as he wasn’t thought to be “affiliated with Al Qaeda or a Taliban leader.” The recommendation was overruled nine months later due to new intelligence, which alleged the “detainee was possible involved in former terrorist attack against the U.S.”

He was held without charge in Guantánamo for two years. He later said that he was beaten, held in solitary confinement and forced to take injections of unknown substances at the facility. According to his Guantánamo file, al-Hadith travelled extensively in the Middle East between 1992 and 1996, and traveled to Sudan with a well-known al-Qaeda operative, referred to as Abu Bakr, in 1992, when Osama bin Laden’s network was active there.

After Harith’s release, he worked for a time as a web designer in his hometown, and as an administrator in an Islamic school. But in 2015, it emerged he had left the U.K. for Syria to join ISIS. The story came to light following the escape of his second wife, Shukee Begum, and their five children from ISIS-controlled areas in Syria. She claims she travelled out there in an attempt to persuade Harith to return back to the U.K. with her, but failed.

Al-Harith’s family said in a statement seen by the BBC that media coverage of him had been “distorted and over-simplified.”

“Whatever he may or may not have done since then they believe from their own experience he was utterly changed by the physical and mental cruelty and the inhuman treatment he endured for two years at Guantanamo” the statement said according to the BBC. 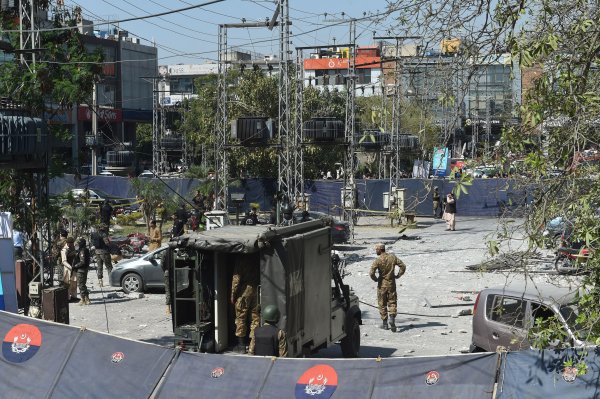 Fresh Explosion Heard in Pakistani City of Lahore
Next Up: Editor's Pick