It’s Time for Every Brand to Pick a Side

You wouldn’t expect that standing up for humanity, dignity and equity — or against hate, racism, xenophobia and sexism — would stir controversy for a cereal or a car or a cup of coffee. But in today’s America, it does.

Consider that for taking a quiet stand against hate speech by pulling its ads from the alt-right site Breitbart, Kellogg’s is targeted with #DumpKelloggs by readers who saw the brand’s actions as an attack on their values. Target removes gender-based signage from its toy aisle, and outraged customers insist they’ll never set foot in the store again. Audi champions equal pay for women in its Super Bowl ad, and while the carmaker was applauded by some, others pilloried the brand across social media for suggesting things aren’t as they should be. And Starbucks’ stand for refugees and against the recent immigration ban led some to #BoycottStarbucks.

Five weeks into Donald Trump‘s Administration, and at a time when expressing cultural values can end decades-long relationships in the time it takes to post 140 characters, consumers and employees are looking for new ways to be heard, represented and served. They’re increasingly voting with their voices, their choices and their wallets. Brands need to take heed, or pay the consequences.

If you don’t think values matter, then you’re not paying attention to Nordstrom, Lyft, Unilever, AirBnB — or the data. John Gerzema, CEO of brand consultancy at BAV, has shown brands that nail their relationships with the cultural good are used more, advocated for more, preferred more and even forgiven more than those that don’t.

For the rapidly growing ranks of conscious consumers, no brand or product advantage is too big to be overcome by dissonant values. People will just stop buying you, using you, thinking about you and they will do it now: like a stone-cold, do-not-call-me-ever-again break-up.

No matter what you stand for or against, there will be some who love you and some who hate you. As ad legend Bill Bernbach said, “If you stand for something, you will always find some people for you and some against you. If you stand for nothing, you will find nobody against you, and nobody for you.” This is our new marketing reality, and cultural values are marketing’s new table stakes. Few are the brands who court controversy as a matter of strategy. But in today’s landscape, avoiding taking sides and bringing your cultural values to life to avoid controversy is a fast track to irrelevance.

When a tweet went up on McDondald’s corporate account —its origins and officiality are still unclear — calling Trump a “disgusting excuse of a President, the Internet had a field day with the apparent side-taking. (The tweet was deleted shortly after it appeared.)

According to the folks at global ad agency Havas, 74% of brands could disappear right now and no one would care. Seventy-four percent. If the old way is what got us to that percentage, a new way is needed — at least if you want your brand to be among those that live among the 26%.

Yes, “doing well by doing good” is a decades-old truism. But showing the world what you stand for (and occasionally against) is now as important, efficient and effective an eyeball-grabbing platform as exists. To win today’s battles for attention — as in, relevance, engagement, resource allocation and return — you’d better let people know whose side you’re on.

We call this world-positive marketing Branded Impact, in which there is an alignment between brand and product truths, cultural purpose and, yes, profit. In fact, data from sources as diverse as Harvard Business Review, Women’s Wear Daily and Deloitte’s millennial survey—to say nothing of a growing number of brands’ bottom lines—indicates that there may be no more efficient or effective strategic growth lever than branded stories of purpose and impact well told across platforms, especially if you’re trying to attract millennials.

Consider Unilever, whose triple-bottom-line commitment (people, planet, profit) is driving the growth of the company: its sustainable living brands grew 30% faster than the rest of Unilever’s business in 2015, delivering nearly half the company’s total growth for the year, according to recent financial reporting.

It turns out Spider-Man’s Uncle Ben was right when he said, “With great power comes great responsibility.” But what he left unsaid is that inside this great responsibility lives great opportunity. Today, brands can be neither quiet, defensive nor isolated. They have to be proactive, and they have to stand for something — for both the world’s and their own good. 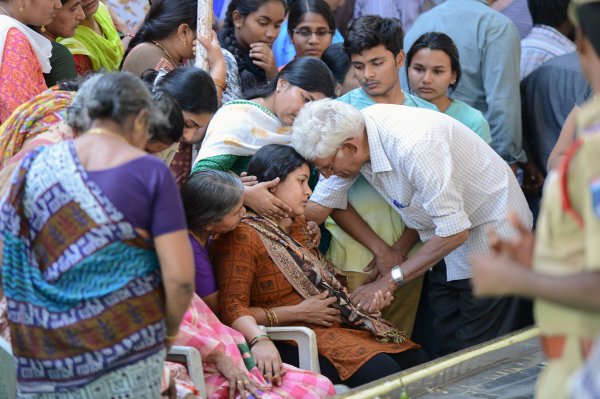 The Hateful Murder of an Indian Immigrant Is What 'America First' Looks Like
Next Up: Editor's Pick