By the Time We Declare a Famine, It's Already Too Late

The declaration of famine in parts of South Sudan this week, the first announcement of its kind since 2011, is but the beginning of a cascade of similar pronouncements to come.

Yemen, northern Nigeria and Somalia are also on the brink of famine, warns the Famine Early Warning Systems network. According to the International Federation of the Red Cross in Africa, another 32 million people in southern Africa face extreme food insecurity. If nothing is done, the World Food Program’s chief economist, Arif Husain, told Reuters, some 20 million people could starve to death during the next six months.

And that is the least of the devastation. Famine doesn’t just kill; it leaves debilitating scars on a nation’s development that endure for decades, perpetuating a cycle of poverty and aid dependency. Once famine takes root, it’s that much harder to recover. Yet the call to prevent famine is never as widely shouted, or eagerly responded to, as the urgent demands to stop it. It’s time to change the stakes.

Famine, in technical terms, doesn’t just mean people are going hungry. It means they are already starving to death — two adults or four children a day per every 10,000 people. That means that by the time famine is formally declared, millions have already been suffering for months, or even years: international humanitarian agencies like Oxfam started warning about a looming famine in northern South Sudan back in March 2015. The only reason why the organization couldn’t declare famine outright was because ongoing fighting meant that no one could take an accurate body count. The last time famine was formally declared, in Somalia in 2011, most of the 260,000 victims had already died.

By the time the inevitable photos of emaciated bodies and gaunt, wizened children with extended bellies appear in the media, it is almost always already too late. The extended periods of malnutrition leading up to famine can result in catastrophic developmental stunting in children. Spread across a wide enough swath of the population, it could mean an entire generation afflicted by lower than average IQ, poor cognition, and reduced earning potential. The World Bank estimates that the economic costs of malnutrition, in terms of lost national productivity and economic growth, could shave off as much as 11% of GDP a year in sub-Saharan Africa and Asia.

UNICEF, the U.N. children’s program, says that 1.4 million children are already severely malnourished in Somalia, South Sudan, northern Nigeria and Yemen. The sooner they get aid, the more likely it is that they will be spared the long-term effects of stunting. UNICEF has released an urgent appeal to the international community to step in with immediate aid to stop those children from dying, but in a time of seemingly unprecedented global suffering — Rohingyas in Myanmar, the war in Syria, Europe’s refugee crisis — it’s hard to break through.

Yet famine is at the root of many of the problems which hold developing countries back. When children are chronically malnourished, their brains don’t develop properly, says Adeiza Ben Adinoyi, the head of the International Federation of Red Cross and Red Crescent Societies’ health unit for Africa. As a result, they may suffer permanently impaired brain function alongside the more visible effects of stunted growth. In other words, the impact on countries afflicted by food shortages is generational; scores unable to reach their full potential, resulting in lost incomes and fewer opportunities. “They are not equipped with the skills to grow and be active members of society,” says Adinoyi. “Others will likely constitute a burden on the wider society, and they will not be able to contribute to the betterment of their country. It leads to a vicious cycle of poverty.”

Children suffering malnutrition lose more than $176 billion in potential earnings each year because of stunting and developmental delays, according to estimates by the Harvard T.H. Chan School of Public Health, money that could be used to develop their countries’ economic output.

In some cases, according to Adinoyi, the inability to find meaningful employment for children stunted by malnutrition can lead to desperate choices. Some may join criminal gangs; others could be drawn to militias, like the ones in South Sudan, which suffered its own famine in 1998, before it gained independence from Sudan. Those are the militias that are largely responsible for today’s famine, because the ongoing civil war has prevented farmers from growing crops for the past several seasons. “Famine just keeps the poverty cycle going,” says Adinoyi.

If empathy is stretched thin, maybe it’s time to start appealing to global self-interest instead. Famine also drives people to seek opportunities elsewhere, Adinoyi says — fueling the refugee crisis in Europe and across the globe. “Ultimately the consequences of malnutrition — hunger, war, poverty — these are the push factors of migration.” On the same day famine was declared in South Sudan, the Libyan Red Crescent announced that the bodies of 74 migrants attempting to make the perilous sea crossing to Italy had washed up on the shores of the western city of Zawiya. It’s not yet clear from where in Africa those migrants came, but it is a route popular with Nigerians, Somalis and South Sudanese, among others.

The European Union has recently backed a $212 million agreement between Italy, Libya, Tunisia and Nigeria to deter migrants from traveling to Europe through better policing. If that kind of money had been spent a generation ago on preventing malnutrition, then perhaps some of those people might not have left their countries in the first place. 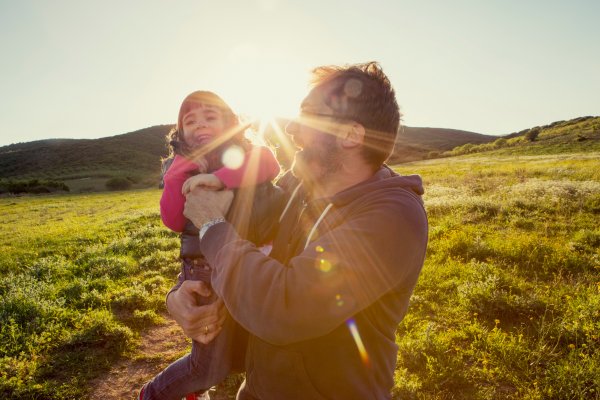 Paid Family Leave Should Include Dads
Next Up: Editor's Pick