Sweden’s deputy prime minister has spoken out after a photo of her signing a climate law surrounded by female colleagues went viral earlier this month. Many wondered whether the photo was mocking a picture of President Donald Trump taken in January.

Isabella Lövin, who also serves as minister for international development cooperation and climate, captioned the Feb. 3 photo on Twitter: “Just signed referral of Swedish #climate law, binding all future governments to net zero emissions by 2045. For a safer and better future.”

It showed her surrounded by seven female colleagues, a striking contrast to the Jan. 23 picture of President Trump. In the Trump photo, a team of male colleagues are shown standing around him in the White House as he reinstates the Mexico City Policy, which bans federal funding for international groups that perform or support abortions.

But now Lövin has explained that her viral image was not intended to mock Trump. “It’s a true photo,” she told Cosmopolitan. “It’s a photo of me and my closest collaborators — my two state secretaries and press secretaries and advisers — so it’s not staged in that way. But I’m really happy that so many people love the photo and that they really felt empowered by the photo.”

Speaking about the climate legislation she was signing in the photo, which calls for Sweden to reach zero net greenhouse gas emissions by 2045, Lövin told Cosmo: “We are a feminist government, and we are signing a groundbreaking climate law.” 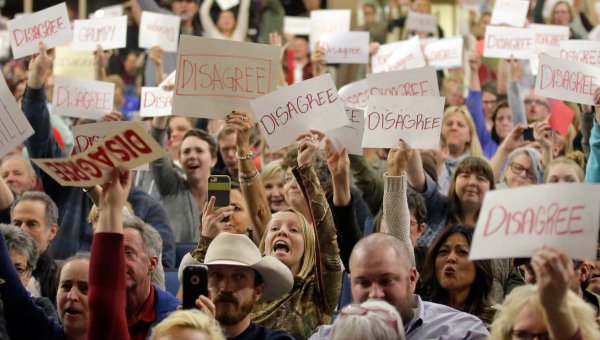 The Resistance Is the Majority of Americans — Not a New Tea Party
Next Up: Editor's Pick