In London, Emmanuel Macron Gets a Warm Welcome from French Expats

Emmanuel Macron, the centrist candidate in the French presidential race, drew a crowd of expats to hear him speak during a charm offensive in London on Tuesday.

An estimated 300,000 French people live in the U.K., making the capital an attractive campaigning location for the former investment banker and economy and industry minister, whose centrist pro-business views are appealing to middle ground voters. The independent candidate currently lags behind far-right National Front candidate Marine Le Pen in first-round polling, but maintains a narrow lead against her in a two-way race.

Macron spoke at Methodist Central Hall, close to the British Parliament, having met with Prime Minister Theresa May beforehand. The crowd included younger voters eager for a new approach in French politics and also more cautious City professionals, curious to see what the 39-year-old would be like in person.

“He’s not like the other ones, the grumpy conservative ones,” Sixtine Marion, 21, a journalism student at City university said. “He’s young and enthusiastic. He will be good for our generation.” Macron, who has never held elected office before, has attracted criticism for his apparent lack of concrete policies. “I like that he doesn’t really have policies,” says Marion, who is originally from Paris. “He is central you know, I really hate the divisions in France, the ongoing war between left and right.”

Other audience members weren’t so sure. “I am here to see what [Macron’s] programme is, I am not clear about it,” Marie Angwiin, 82, said. “I think he possibly could win but I think Fillon’s programme is very clear.” Fillon, the conservative candidate, had been the favorite in the presidential race but has struggled to recover from a damaging investigation into political jobs held by members of his immediate family.

“Fillon is my candidate,” Clement Rohart, 43, a banker, said. “but he’s having some difficulties. So if he doesn’t make it to the second round then maybe, maybe Macron. We’ll see.” Rohart doesn’t believe Macron’s lacking policy platform will be an issue for voters. “He’s fine. The guy on the right is very much in the right, the guy on the left is very much on the left, all he needs to do is to keep going and make no mistakes.”

Macron isn’t the only candidate seeking to attract voters beyond France’s borders. Far right candidate Marine Le Pen courted controversy and possibly Franco-Lebanese votes too, during a two day trip to Lebanon this week, while Francois Fillon spent three days in Réunion, a French Island in the Indian Ocean.

The expats in the crowd had varying backgrounds and opinions but were largely united in their dismissal of the French left. This appeared to apply to even self-identifying leftist voters. The Socialist candidate, Benoit Hamon, has consistently seen weak polls. “I’d consider myself left wing but France is in crisis economically and socially,” Etienne Bataille, a 25 year old PR professional, who moved to the U.K. as a child, said. “Macron has a pro-business attitude which I think France needs at the moment.”

In France’s two-round elections, it’s crucial for any serious contender to attract voters who initially preferred another candidate. French voters in London were in no doubt how they’d be voting if Macron didn’t make it to the second round. “I’d vote for the left wing candidate,” Bataille said. “I just don’t want the Front National – I’ll vote to block Le Pen.”

Angwiin agreed. “I will certainly not be voting for Marine Le Pen,” she said. “Anyone but her. I vote French style – against a candidate, not for.” 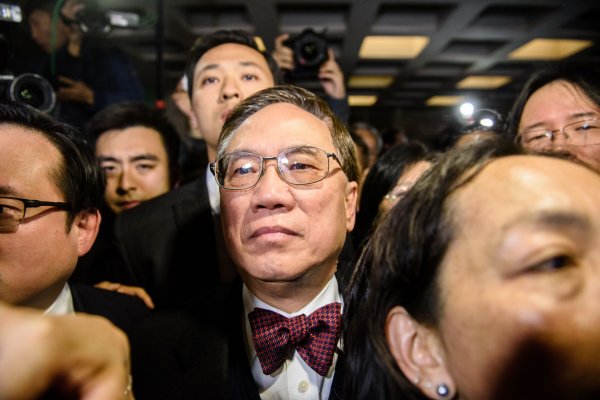