American Suspicion of Russia Is Older Than You May Think

Now is not a great time for warm feelings about Russia in Washington. After a campaign season full of intrigue, the fallout from questions of foreign involvement in the most recent presidential election continues to grow. And most recently, the revelation on Wednesday that Attorney General Jeff Sessions spoke with Russia’s ambassador to the United States twice during the 2016 campaign season, only to say during his confirmation hearings that he had not communicated with Russian officials, has spurred calls for Sessions to resign.

This wave of tension has sparked numerous comparisons to the Cold War period, which is unsurprising. Though the U.S. and the Soviet Union were allies in World War II and helped each other to victory, that cooperation was followed by decades during which the opposition between the two systems they represented dominated global politics.

But, though the Cold War may be the most obvious example of a time when American feelings about Russia or the Soviet Union were dominated by suspicion, experts say that hostility between the two dates back to long before that period.

“The trope [of Western European suspicion of Russia] goes back a long ways, to the 1500s and 1600s, and became stronger after the Napoleonic Wars, when Britain and Russia were grappling,” says Kees Boterbloem, an expert in Russian and European history at the University of South Florida. “That image of Russia as an ‘anti-world’ was already there. There are these old-fashioned myths about Russia being a different entity altogether from quote-unquote ‘civilized’ humanity, and time and time again I get the facile impression that everybody goes back to that dichotomy whenever there’s some kind of problem.”

Those old ideas were brought to the United States in the nation’s earliest days, and were amplified in the centuries that followed. By the 19th century, as the U.S. became more firmly established as the home of liberal democracy and that system of government became closely linked with citizens’ ideas of the nation, those Americans who gave thought to Russia saw the region as in some ways their opposite.

To boot, Imperial Russia refused to recognize the U.S. as a nation for decades after the Revolutionary War. “Outraged by its extravagant ideas about Liberty and Equality, Catherine the Great steadfastly refused to receive a U. S. Minister,” as TIME once put it. “Her successors, Paul I and Alexander I, shared her attitude.”

“Russia was viewed as a last holdout of the worst kind of autocracy,” says Nina Tumarkin, director of Russian Area Studies at Wellesley College, who served as an adviser to President Ronald Reagan on matters concerning the Soviet Union. “Russia had a very reactionary monarch who was anti-revolutionary, so there was this view of Russia quashing democracy.”

And, Tumarkin adds, as a tidal wave of Russian Jews began to emigrate to the U.S. to escape persecution in the late 1800s, their reports helped anti-Russia feeling grow. Some American evangelicals even saw Russia as a biblically foretold evil opponent to the Holy Land. (There were exceptions during the 19th century, says Igor Lukes, a professor of history and international relations at Boston University. “President Lincoln was on very good terms with the Tsar of Russia,” Lukes says. “They mutually liked each other and each considered the other a great reformer; Abraham Lincoln gradually abolished slavery whereas Alexander II abolished serfdom in Russia.”)

In the early 20th century, the distrust of Russia among some Americans continued.

The Russian Revolution in 1917 initially sparked hopes of the rise of a democratic Russia; as A. Scott Berg explains in his biography of Woodrow Wilson, the president saw the Tsar’s abdication that March as a sign that World War I — which the U.S. was about to join — could be a global “war against autocracy.” But, with the Bolsheviks coming to power and bowing out of the war, that hope was soon dashed. The U.S. government even refused to recognize the new Soviet government; Wilson was doubtful that the change would stick, and the ambassador to the U.S. who was appointed by Lenin was denied a visa.

And, though the Zimmermann telegram is often given credit as the tipping point for the U.S. entry into World War I in 1917, Jeffrey Burds, who teaches history at Northeastern University, says that Wilson was also motivated by being “terrified” of the possible results of the Tsar’s abdication and participated in an Allied attempt to surreptitiously steer the course of Russian politics by supporting anti-Bolshevik forces.

In other words, though the Cold War is famous as a time for espionage between the U.S. and USSR, suspicion began on both sides decades earlier — and was, in both directions, based on some degree of truth. Though the West denied that the intervention was a big deal, Burds says, declassification of documents in the post-1991 period has showed that in fact the Soviets were right and the U.S. really was interfering with their internal affairs. In the other direction, Burds says that American fear of things like possible dealing in industrial secrets by organizations like the Soviet trade group Amtorg in the 1930s was well-founded.

But, when the U.S. and much of the rest of the world faced economic crisis in the 1930s, the Soviets — removed from the global economy — were insulated from that damage. Though many people there were already suffering greatly under the rule of Lenin and then Stalin, the worst was still hidden from audiences in the U.S. The American Communist Party grew, as the American media reported warmly on the doings of “Uncle Joe” Stalin. For example, in 1938, TIME reported that one influential member of the American Communist Party returned from a visit there to report that she had stayed in the nicest hotels, eaten well and seen real freedom in action, and had only come back to the U.S. became she wanted to use that example to “make America better.” Lukes says that some Americans who decided to move to the USSR to see the supposed paradise themselves ended up in the Gulag. This idealism wasn’t just something for the working classes either, as many American intellectuals watched the goings-on with interest.

With the coming of World War II, both the U.S. and USSR took an anti-fascist position and played key roles in combating the spread of Nazi Germany. News reports showed FDR and Stalin smilingly conferring, and some Americans — including those who were giving serious thought to the USSR for the first time— embraced that rosy picture.

But the hope for a future of peaceful coexistence was crushed even while the alliance still held. What exactly tipped the scales is hard to say, but the tail end of the war provided plenty of opportunity for the U.S. to reconsider its opinion of the USSR, and vice-versa. “All these transition moments are built into World War II,” says Burds.

Around 1943, as the Allies began to think about how they would relate to one another in the post-war world, as Burds frames it, a group of Americans associated with Allen Dulles, who would later serve as Director of Central Intelligence, realized that the Soviet Union would emerge from the War as a major force and that the U.S. didn’t really know enough about what was going on in the USSR to be able to deal with such a force intelligently. At universities — especially Columbia and Harvard — and within the government, the 1940s saw Americans begin to approach the USSR with a know-your-enemy thoroughness.

The death of Franklin Roosevelt in early 1945 brought Harry Truman to the presidency, and along with him a much more “hard-line,” as Tumarkin describes it, approach to the Soviet Union. Meanwhile, reports of the Red Army’s brutality in the course of liberating Nazi territory, available even to non-specialists, led many in the American public and Congress to sour on Russia. For example, a TIME correspondent in Vienna sent back a report that he had heard from several sources that after Russian forces took the city they would “approach an apartment house and, judging from its size, demand from the landlord that a certain number of women be delivered to them for their pleasure.” Though he noted that he was unable to independently verify the report, he passed along to American readers that the fear inspired by the idea was undoubtedly real.

“The Cold War chill sets in very quickly in 1945, even before the end of the war,” Tumarkin says.

Look at the timing of the atomic bombing of Hiroshima and Nagasaki, she adds. At the Yalta Conference, Stalin had promised to enter the war against Japan within three months after victory over Germany in Europe. Victory in Europe day was celebrated on May 8, 1945. Three months later was August. The bomb was dropped on Hiroshima on Aug. 6, 1945, just days before the deadline. The Soviet Union did declare war on Japan precisely two days later, but Tumarkin argues that one big reason for the U.S. decision to drop the bomb at that moment in the war was that the world had seen what happened when the Soviets liberated nations in Eastern Europe — including the establishment of Soviet-style or Soviet-friendly regimes — and wanted to end the war quickly to prevent that from happening in Asia.

In short, even before the Cold War began, the U.S. and Russia were in opposition.

Boterbloem suggests that the difficulty of abandoning such a long-standing dichotomy, despite the fact that the geopolitical situation has changed many times over since then, may underlie tensions with Russia even to this day.

“We don’t really know too much about other countries so we’re inclined to stick with old ideas,” he says. “It’s hard to say, ‘Forget about what you learned, we’re looking at a different country here.’” 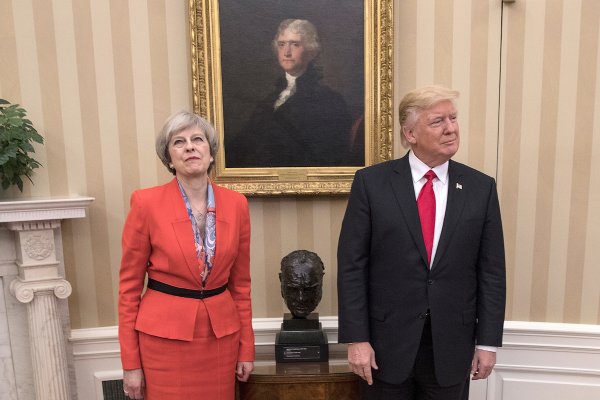 How World War II Shaped the 'Special Relationship' Between the U.S. and U.K.
Next Up: Editor's Pick