Following Weeks of Silence, President Trump Has Finally Spoken Out Against Anti-Semitism

President Trump’s remarks on anti-Semitism Tuesday would be unremarkable if they had come weeks ago.

But Trump has struggled when asked about the topic in the past, criticizing reporters, changing the subject and generally avoiding the routine denunciation of prejudice most Presidents would give.

On Tuesday, that changed when Trump said that “the anti-Semitic threats targeting our Jewish communities and community centers are horrible and are painful” and saying more work needed to be done to root out prejudice.

The words were welcomed by Jewish community leaders, who have been troubled by phoned-in bomb threats against nearly 70 Jewish community centers in recent weeks and the vandalism of 200 headstones at a Jewish cemetery in Missouri over the weekend.

“It means a great deal that he spoke out and used the term anti-Semitic,” says David Posner, vice president for strategic performance for the Jewish Community Center Association of North America. “It is important to recognize this is the reality, that these attacks are being directed against Jewish institutions … We look forward the government continuing to take this as a major priority and solving the case and apprehending the perpetrator or perpetrators.”

A White House statement on International Holocaust Remembrance Day was harshly criticized for omitting any mention of anti-Semitism or the 6 million Jews who were killed. When an Israeli reporter asked Trump at a joint press conference with Benjamin Netanyahu about the rise of anti-Semitic incidents in the U.S. since his election, Trump responded by talking about his Electoral College victory. And when another reporter pressed him on the issue at another press conference, Trump told him to “sit down” and called the question “very insulting.”

But pressure was building for Trump to change his approach.

On Monday, Trump’s daughter Ivanka, who converted to Judaism when she got married, tweeted that “America is a nation built on the principle of religious tolerance. We must protect our houses of worship & religious centers.” On Tuesday, his election rival, former Secretary of State Hillary Clinton, tweeted that “everyone must speak out” about the threats and attacks, including Trump.

David Friedman, the ADL’s vice president of law enforcement and communal security, said law enforcement has made the bomb-threat investigation a high priority, and he is glad the President and his daughter have begun to speak up.

“We would always encourage leaders both at the national and state level to be speaking out,” Friedman says. “I don’t think you can speak out enough about this kind of hatred.”

“This has gone on for too long,” Hier says of the bomb threats. “This should be taken very seriously at the top, and we think that President should address this subject. Just to answer a question, let’s say at a press conference, is not sufficient. I think he is better served by addressing the question head on in a speech.”

Trump’s silence until Tuesday, Heir says, does not mean the President is giving cover to his anti-Semitic supporters.

“We can’t say that because of this, we are reading into this some nefarious idea that he harbors anti-Semitic feelings,” Heir says. “I think that is quite preposterous.” 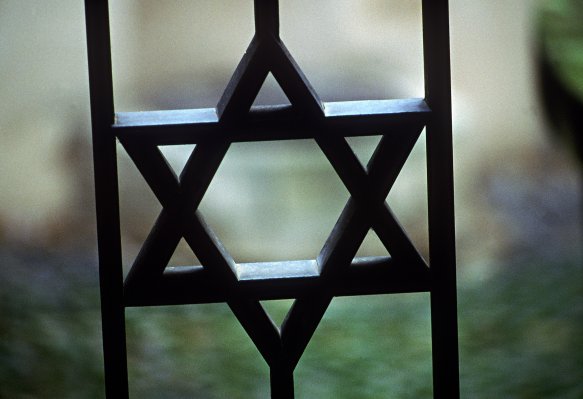 Vandals Have Attacked a Jewish Cemetery in Missouri
Next Up: Editor's Pick