Kristin Chenoweth dropped by the Late Show Tuesday night. In return, something almost got dropped on her.

Chenoweth was the butt of a somewhat cruel April Fools’ prank — right as she was talking to David Letterman about her tendency to look out for falling objects.

“No matter where I’m at, I always look up. Because I want to know if, you know, anything’s gonna fall,” Chenoweth said.

Unfortunately, she didn’t look in the right place.

The show planted a sandbag that fell from the ceiling right as she was talking, causing Chenoweth to shriek and later comment, “I’m sweating in between my cleavage!”

The moment no doubt brought back memories of Chenoweth’s experience while shooting for The Good Wife in 2012, when she hospitalized after a lighting fixture fell on her on set.

Luckily, Chenoweth wasn’t hurt this time around, and even tweeted afterwards: “Just finished letterman. So fun.” No foul. 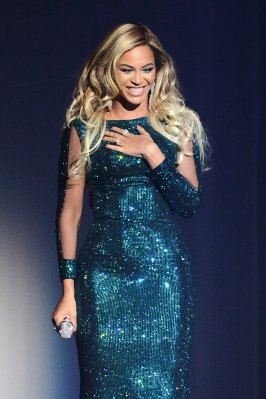