With heart-shaped rollercoasters, pastel-colored gas stations and a futuristic outdoor cinema, Katy Perry’s new music video for “Chained To The Rhythm” is as quirky and heavily stylized as ever.

Perry recently dropped her new chart-topper, featuring a verse from Bob Marley’s grandson Skip, setting a new record for the most first-day streams for a single track by a female artist. Since then the pop superstar has been teasing fans with cryptic hints about the accompanying music video — including an image of a hamster on a wheel and a rocket with the caption: “Bombs away!”

After much anticipation, the video has finally been released — drawing nearly half a million views just hours after its launch. Set in a 1950s-style fantastic amusement park, the four-minute video shot at Six Flags Magic Mountain in California, shows a heavily artificial, Instagram-friendly world. Watch it above. 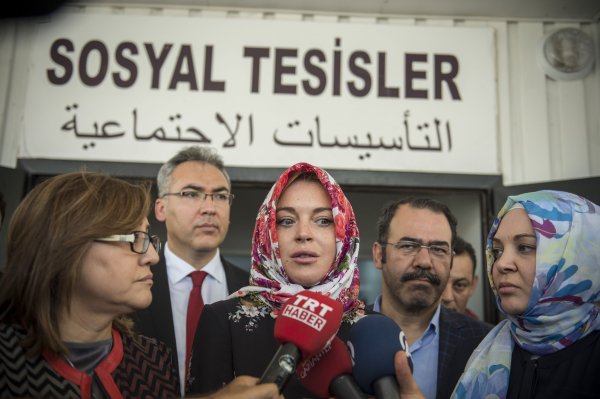 Lindsay Lohan: 'Racially Profiled' for Headscarf
Next Up: Editor's Pick