Alex Trebek Rapped Drake Lyrics on Jeopardy! and It Was Perfect

Veteran Jeopardy! host Alex Trebek proved that 76-year-olds can still get down when he delighted contestants by rapping (well, reading) the lyrics to songs by Drake, Kendrick Lamar, Lil Wayne, Desiigner and Kanye West.

Trebek, who has hosted the syndicated game show since 1984, read out lyrics to chart-topping tunes including Drake’s “Started From The Bottom” and Kanye West’s “Famous” under a category called “Let’s rap, Kids!”

When he finished, he told the bemused panel: “I was just getting into this rap thing. I’m not too good at it but I was getting into it.”

A clip of Trebek’s rapping segment shared on Twitter by social media producer Kenny Ducey had received more than 20,000 retweets as of Tuesday morning. “I’m willing to grant a waiver for Canadian Trebek to be our new President,” one social media user said.

This is not the first time the dignified Trebek has rapped on air. Last October, he rapped the lyrics to the popular song “Jumpman,” while contestants were asked to identify the artist. MC Hammer, Notorious B.I.G. and Taylor Swift are among the other A-listers who have received the Trebek treatment. 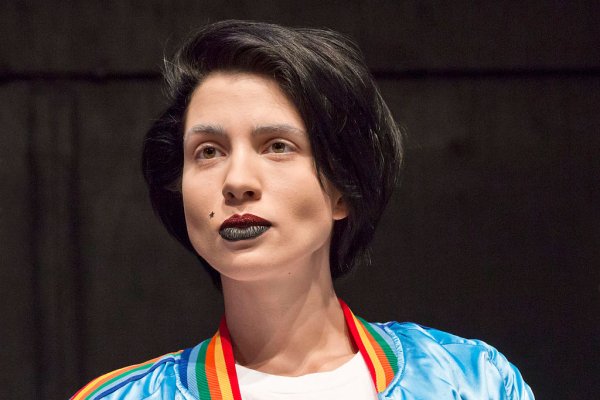 Pussy Riot's Nadya Tolokonnikova on Resisting President Trump: 'We Have a Ton of Work to Do'
Next Up: Editor's Pick