Vandals Have Attacked a Jewish Cemetery in Missouri, Toppling Scores of Tombstones

More than 100 headstones were reportedly damaged or toppled in a historic Jewish cemetery in University City, Mo., on Monday, in what local media says was likely an act of vandalism carried out by an organized group.

According to Fox2 St. Louis, police will not say whether it is being pursued as a hate crime.

“It’s extraordinarily sad, I know people who are buried there,” said Karen Aroesty, the regional director of the Anti-Defamation League, speaking to Fox2.

“Enough already. This is where your loved ones come to be safe in perpetuity, and the level of tension in the Jewish community is pretty high.”

The Chesed Shel Emeth Cemetery was established in the St. Louis suburb of University City in 1893, and is a well-known and sacred memorial ground among the local Jewish population and other members of the community.

The incident follows a new round of bomb threats at Jewish community centers across the country. It’s the fourth time this year that multiple Jewish institutions have received threats in tandem, causing alarm over what some say is a rise of anti-Semitism in the U.S.

The White House denounced the threats on Monday, CNN reported, citing deputy press secretary Lindsay Walters. She said: “Hatred and hate-motivated violence of any kind have no place in a country founded on the promise of individual freedom. The President has made it abundantly clear that these actions are unacceptable.”

Trump’s son-in-law and adviser Jared Kushner is Jewish and his daughter Ivanka is a convert to Judaism. However, some Jewish community leaders have criticized the failure of President Donald Trump or his Administration to explicitly denounce anti-Semitism until now.

When a Jewish reporter asked Trump last week about a perceived “uptick in anti-Semitism,” the President criticized the reporter for asking an “unfair question.”

At joint press conference with Israeli Prime Minister Benjamin Netanyahu on Feb. 15, Trump was asked a question about anti-Semitism but responded by talking about his electoral win.

The Administration was also strongly criticized in January because a White House statement on International Holocaust Remembrance Day conspicuously failed to mention Jews or anti-Semitism. 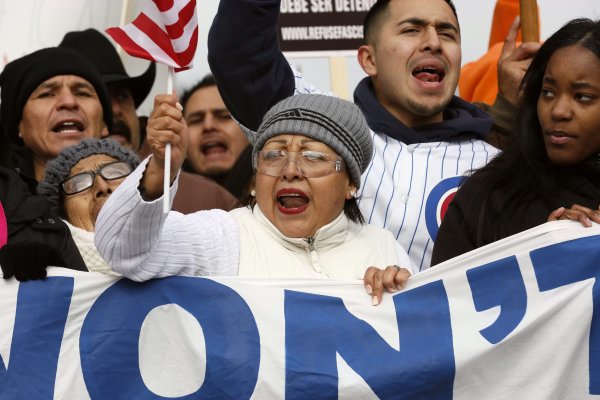 100+ Fired After 'Day Without Immigrants' Protests
Next Up: Editor's Pick